ALICE'S ADVENTURES IN WONDERLAND (1972) - who's your favourite Alice? 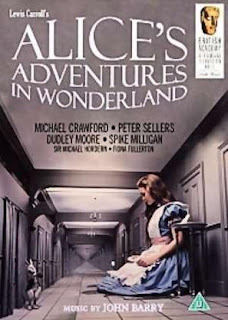 The first version of a story that you enjoy, often becomes your favourite. This was my first screen version of Alice's adventures, though I later found the Disney version far more consistent. But why choose, when you can enjoy both? I can't give up on the 1972 film, mainly because of John Barry's soundtrack. This time around, watching in widescreen for the first time, I was struck by the beautiful sets as well as the uncanny make-up designs by the man about to apply himself to some world-famous characters of Star Wars... 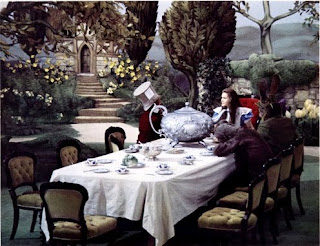 The story and dialogue are faithful to the book, but not at all insightful, mostly coming over as dry repetition of old nonsense verse. This is respectful for fans of the book, but episodically hit-and-miss as a movie. Though it was written for children, I can't see this holding their attention nowadays. 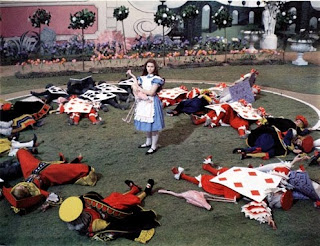 Fiona Fullerton is perfect for Alice, and I still think of her as the Alice (despite a subsequent hot-tub scene with James Bond). The characters she meets provide viewers a tricky game of 'spot the actor'. The cast are a snapshot of comedians and character actors of the time. Top of the bill is Michael Crawford (singing several songs as the White Rabbit), who is one of a few that can cope with both the unique material and the heavy make-up. Peter Sellers (the March Hare), Spike Milligan (the Griffin, below) and Michael Hordern (the Mock Turtle) are all excellent at working through the masks and complex costumes, while still bringing the verse to life. All of them only really recognisable from their voices. 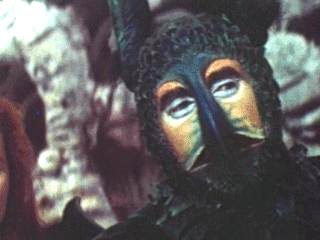 The make-ups were a colossal task involving many different animal designs. The full face masks, whole heads in fact, of a monkey, owl, frog, bird etc are beautiful and naturalistic, though a little creepy. The lizard is supposed to be a comedic character but looks frightening, especially the eyes. The biggest challenge would have been the courtroom scene, when every character in the story appears together. I wish I could illustrate this spectacular work with better photos. 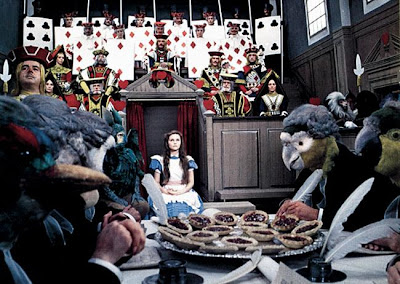 No surprise that the make-up designer responsible was soon to create some of the classic characters for Star Wars, also shot in England, five years later. Stuart Freeborn deserves a special mention, as he'd also made the full-body make-ups for the ape-men prologue of 2001: A Space Odyssey, which notably premiered the same year as the first Planet of the Apes film. Freeborn later created the startling prosthetic effects for The Omen, including some animatronic dogs for the graveyard attack (which I'd never noticed) and the famous detached head...

But Freeborn's most overlooked achievements are the successful designs and make-up creations of characters like Chewbacca, the Wampa and who knows how many background aliens in the first three Star Wars films. He designed Yoda! I'd love to see a book on all his work, maybe the Star Wars community (religion?) can come through. There's already an interview with him in this Star Wars Insider magazine. Online there's this illustrated overview of his career. 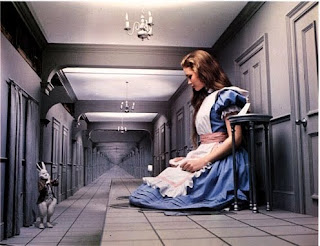 The huge storybook sets, some saturated in colour, involve some tricky large scale effects for Alice's changing in stature. These are really successful for being shot 'in camera' because they certainly outshine any of the clunky optical work (the picture noticeably degrades for a matte shot of her giant arm hanging out of a tiny window). The publicity photo above clearly shows how one effect was done - how the wrong lighting and wrong angle (intended for the film camera, not the stills camera) highlight the foreground platform and the background set, no longer blending together as they do in the film.

But all the impressive technical achievements don't compensate for some fairly clumsy directing, and the hit-and-miss nature of Alice's various 'adventures'. There's also some lame attempts at comedy though the use of 'jump cuts' and speeding up the footage, both techniques looking like a desperate last-minute fix. There's more comedy value in Alice saying "queer" an awful lot. 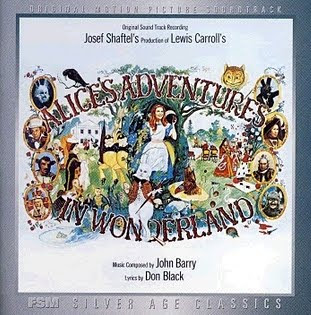 Like I said, I'm carried through it all by John Barry's beautiful soundtrack, which adapts some of Lewis Carroll's verses into 'songs'. The score was released recently on CD, but there are many more instrumental cues that I'd love to hear in an expanded release.

It's very hard to enjoy this on DVD at present. It's a 2.35 widescreen movie that keeps being released from a non-anamorphic analogue transfer which would look bad even on VHS. The visual detail is lost, the busy video artifacts constantly distract. The audio even distorts when the music swells. It's a terrible transfer that won't go away - it looks no better on TV either. Again, this is the version that's just been re-released, so beware.