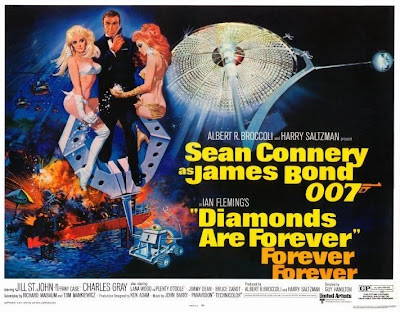 DIAMONDS ARE FOREVER
(1971, UK)
Sean Connery bows out of the Bond series

In the first ten years, the James Bond film series was unlike any other - more action-packed, more stylish, more violent, more sexy. They set the trend in the 1960s - countless other movies and TV shows tried to copy the format and the style. (Conversely, in the 1970s, the Bonds seemed to follow trends - blaxploitation, kung-fu, Star Wars...).

When I started movie-going at the end of the 1960s, it was a confusing time to start following Bond. The first three movies that I saw on first release had three different actors playing 007: the only George Lazenby (On Her Majesty's Secret Service), the 'last' Sean Connery (Diamonds Are Forever), and then the first Roger Moore (Live and Let Die). At the same time, it took me years to catch all the previous Connery Bonds on re-release.

Years before TV could afford to show them, all the Bond films kept being re-released, sometimes in double-bills - one ticket for two two-hour movies! They commanded multiple viewings years before home video arrived. But like the Planet of the Apes films, I couldn't possibly see them in the correct order, only as and when they appeared in local cinemas. I saw Diamonds are Forever in early 1972, at the impressionable age of ten, when I still took the stories at face value. When 007 is being cremated alive, I could see no way out. I thought he'd die for sure. The horrifying scene was later echoed in Scrooged.

The series had just taken a knock. On Her Majesty's Secret Service had been an unusual Bond movie - it stuck to the novel, avoided using gadgets, and had a uniquely dramatic story of Bond falling in love! It had been perceived as a failure, mainly due to the lack of Sean Connery. Diamonds Are Forever marked Connery's triumphant return and threw gadgets back in to the mix. Playing it safe, the script threw away most of Ian Fleming's novel and resorted to a retread of Thunderball. 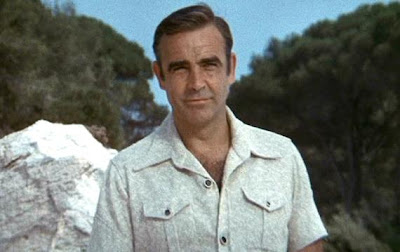 Bond is called in to follow a series of murders connected to an international 'pipeline' of diamond smuggling. The trail leads him to Tiffany Case (Jill St John) in Amsterdam and together they fly to Las Vegas where the crimes change from grand larceny into global blackmail.

Another angle to keep audiences extra-happy is to inject an unusual amount of humour, paving the way for Roger Moore's style of Bond. Besides most of the main characters playing for laughs, there's even a comedy sheriff - a dry run for the Sheriff Culpepper in Live and Let Die. The script is certainly witty, carefully ensuring that even the scene changes are ironic.

The highlights of the film include the most complex car chase in the series so far, as Bond steers a red Ford Mustang in rings around (and over) the police along the old Vegas strip (in Fremont Street). There's a sillier chase, that I loved as a kid, that was obviously designed to make me buy a diecast copy of the unwieldy Moon Buggy (a must-have boy-toy bestseller that year). Both chases show up American cars as being overly heavy and unable to take corners without skidding or crashing.

There are some punishing and realistic fight scenes for Connery. One is filmed entirely in a small elevator, echoing the inventiveness and brutality of his showdown in a cramped train carriage in From Russia With Love. A later scene, where he tackles two female gymnasts, is cited as a main influence on Ridley Scott's filming of Pris' attack on Deckard in Blade Runner.

But by the end, the faked exploding helicopters and useless machine-guns start to look lazy. The use of an actual oil rig as a location sounds like a good idea but turns out to be low on exciting possibilities. It felt like an anticlimax compared to Blofeld's hollow volcano in You Only Live Twice. An oil rig doesn't look like a Ken Adam design classic either. My instinct is that the second-unit action was below the usual standard. 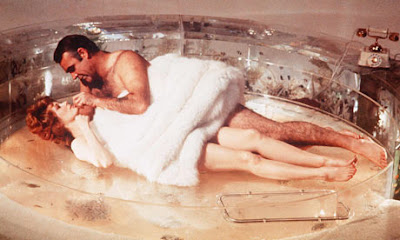 The use of endless locations make the film. Las Vegas and the Nevada desert looked like another planet. Never ever thought I'd get to see it first hand. When I finally visited Vegas, I made a point of seeking out some 'Diamonds' locations. The casinos visible in the car chase scene. The alleyway off Fremont Street where Bond tips his car onto two wheels. Circus Circus casino where trapeze artists used to swing high above the slot machines and, happily, where a water balloon stall still stood, where Tiffany Case once squirted. We also visited the Hilton, used as Willard Whyte's 'home' (the extra tower was painted in on top, the glass exterior lifts were actually those outside the Landmark Hotel). Haven't yet found Whyte's spectacular country lodge, which looked like a Ken Adam set, but was in fact a real location nearby! Adam designed a most outrageous Vegas hotel suite, complete with a totally impractical glass bed, lined with a goldfish tank. 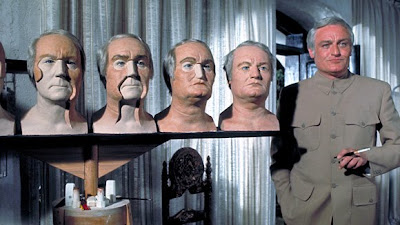 Starring opposite Connery is my favourite incarnation of his arch-enemy Blofeld. Played by Charles Gray, he's perfect as an evil supercriminal who actually could win. Gray and his superb voice gained another kind of immortality as the stony-faced Narrator in The Rocky Horror Picture Show, and he'd previously personified satanic evil as Mocata in Hammer's superb The Devil Rides Out. 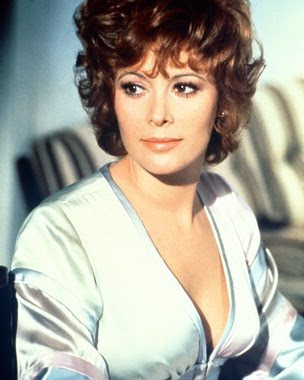 While Diana Rigg had been a formidable partner for Bond, the producers threw subtlety to the wind and shamelessly amped up the jiggle factor here. Jill St John is good at comedy, but gets to sport a parade of ultra-jiggly costumes. In a fight, she's one of the most useless Bond girls - I mean, who throws a trifle? Natalie's younger sister Lana Wood also seems to have been cast for her formidable assets. 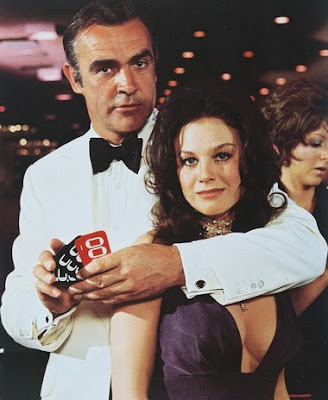 Blofeld gets two killer sidekicks this time around, Mr Wynt and Mr Kidd, who are lovers like their characters in the novel. Crispin's dad, Bruce Glover, does well not to make his gay hitman too swishy, unlike much TV comedy of the time. It's not often you get to see gay men holding hands in a mainstream movie either. 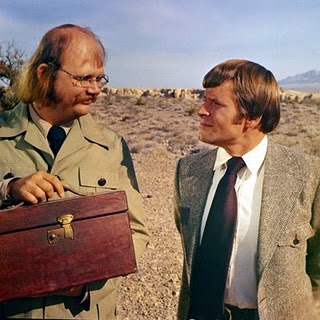 Despite mostly being shot in the US, there's only one black actor who gets a speaking part - a fact not compensated for until the next film, Live and Let Die. Adding insult to injury, there's also a scene where a young black woman transforms into a gorilla. What were they thinking?

There's a belting theme tune from Shirley Bassey and the John Barry soundtrack confirms this an authentic Bond film from start to finish, helping soothe over the cracks in the story. A wonderful remastered and expanded CD soundtrack was recently released. 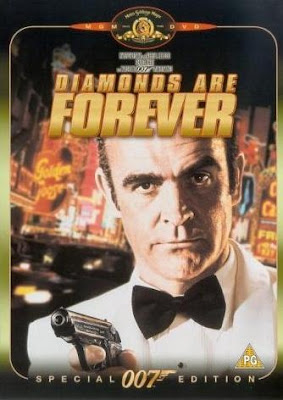 Diamonds Are Forever is available as a two-disc DVD special edition, with plenty o'extras, including some rare deleted scenes that explain some of the plot holes and continuity errors, and reveals Sammy Davis Jr's cameo. Presumably, once it's given the frame-by-frame restoration treatment, it will presumably get the Blu-Ray treatment too.


An original theatrical trailer is here on YouTube, with moderate spoilers...

A few of the movie locations for Diamonds Are Forever.