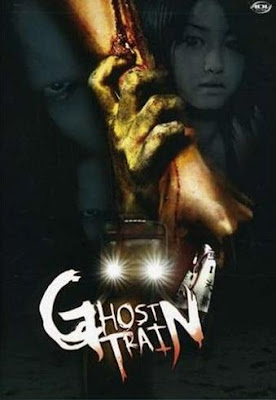 GHOST TRAIN
(2006, Japan, Otoshimono)
Even after 10 years of Asian horror films riffing on the scary elements of the original Ring (1998), I really don't mind yet more ghosts with long black hair, as long as they are scary. Besides, the ghost in this one is wearing a black dress - that's completely different!

Ghost Train delivers the chills, and attempts to add a new dimension of its own, enough to set it apart from the rest. I'm very partial to movies set in subway systems, and I've actually had nightmares about London's Underground stations. This film taps into scares that I didn't feel during horrors filmed down there, like Death Line (1972) or Creep (2004).

Otoshimono has been retitled several ways in other countries, but it's not to be confused with the South Korean 'ghosts on a train' movie, Red Eye. 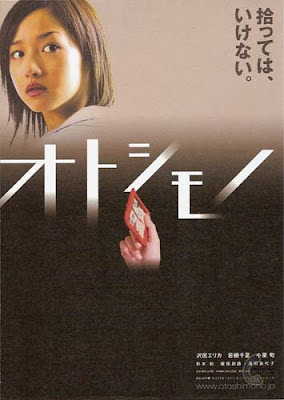 The story starts in the busy Tokyo subway system, when little Takashi picks up a train pass off a platform, only to be told to "give it back" or he will die. He later tells a schoolfriend Noriko, and her older sister Nana, of the warning from a woman in black. He soon disappears off the face of the Earth, and the train pass re-appears on the platform. This time Noriko unwittingly picks it up...

On the same line, train driver Shunichi sees a bloodless mangled corpse lying on the tracks in the tunnel ahead. But when he stops and looks underneath the train, the body has disappeared. His boss is concerned that he's not only seeing things, but that he keeps making emergency stops. On another subway train, Kaeru gets a cursed bracelet that she can't remove. What is going on? 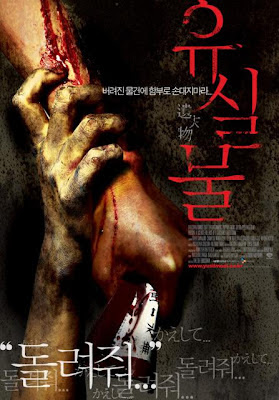 This story has its roots in the Japanese custom of leaving lost objects precisely where they were lost, so that the owner can find them if they retrace their steps. In Japan, I even heard stories that wallets will be respectfully left alone, wherever they were dropped, until claimed again by their owners.

The creeping camerawork and carefully orchestrated sound mix help keep the film constantly and effortlessly scary, right from the start. Though some of the shock moments are needlessly cranked-up by repeat edits and zoom-ins, for anyone who missed them the first time. But for once, the scares are all for genuine reasons, and not false starts. The pace is kept rolling by the constant intercutting between the parallel hauntings - Nana and the train pass, Kaeru and the bracelet, Shunichi and the train company.

Early in the story, Nana is trying to decide on her higher education and is reading a brochure from the Miskatonic University - a hint at where the story could be heading - a startlingly different ending to other long-haired ghost movies. I even detected a slight trace of the Underground station horror Quatermass and the Pit (1968). Writer/director Takeshi Furusawa previously worked on the influential Kairo (Pulse), but this film is a far more straightforward chiller than anything by Kiyoshi Kurosawa. 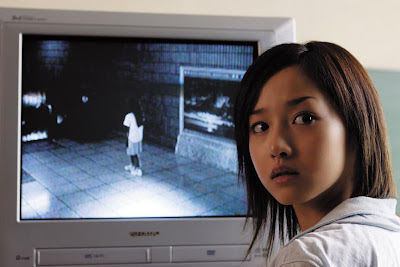 The cast are engaging, with Erika Sawajiri (from Shinobi) as Nana, and Chinatsu Wakatsuki (from Ju-rei) as Kaeru. Shun Oguri as Shinuchi the train driver is a familiar face from Azumi, Azumi 2, Takeshi Shimizu's Reincarnation, and (a possible in-joke) the Train Man TV series (a romantic drama about a manga geek defending a 'normal' woman from bullying on the subway). 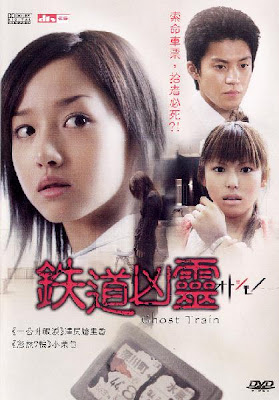 Ghost Train isn't very gory, and uses a few cliches, but it's an enjoyable story packed with scares, in a setting ripe with possibilities. I watched it on DVD from IVL in Hong Kong, and it's currently available on DVD in the US from ADV.
Posted by Mark Hodgson at 12:07 pm