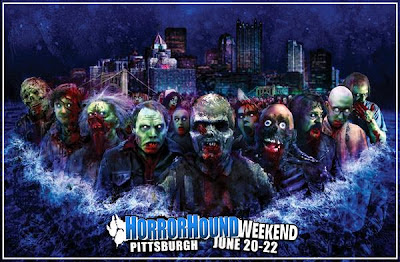 Return of the zombies to the shopping mall

It's a long way to Pittsburgh from anywhere, especially from England, but because of the zombie theme and being only a few hundred yards away from the original Dawn of the Dead shopping mall, I simply had to go to this particular horrorcon. 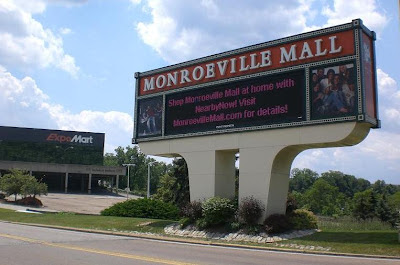 Only a few hundred yards across the parking lot from the Monroeville Mall, the convention took place inside the Expo Mart for a three day event.

The guests included actors, directors and make-up artists from famous horror films, as well as artists like Joel Robinson who provided the awesome poster art for the event (pictured at the top).

Besides the main room which housed the vendors and the guests' signing tables, there were special screenings in a nearby hall. Friday there was a special American Werewolf In London (1981) evening starting with the film itself. This was followed by a Q & A session with the director John Landis and the star David Naughton, together with Paul Davis who's just finishing work on his documentary about the film, called Beware the Moon.

He had first been impressed by American Werewolf when he saw it on VHS at the age of three! Two years ago, exasperated by the lack of extras on the DVD release, he set out to interview everyone connected with the project. John Landis observed that the project was potentially doomed unless he'd first cleared up the rights issues (which has since been sorted out). Other independent documentaries are currently in limbo because of this issue. For example, Landis had seen and enjoyed Spine Tingler, all about the director William Castle, but predicted it will only be seen at conventions unless about $4 million can be found to sort out licensing issues!

Paul Davis then presented what he called a 'director's cut', an extended 105 minute work-in-progress version. Of course, the fan in him wants it to be longer, but Landis is advising a shorter cut. Only one shall win! Beware the Moon will officially be completed in Los Angeles later in the year. It's an enjoyable look at a great film, full of surprising and interesting behind-the-scenes stories told by some great raconteurs. There are clips posted at their MySpace page. I'll review it properly shortly. 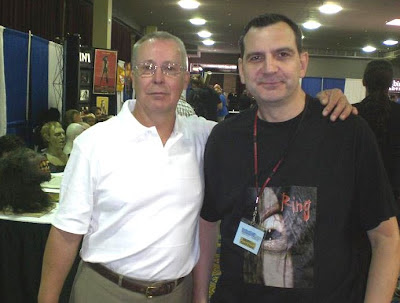 John Amplas and me

Pittsburgh is of course where George Romero shoots most of his films, and many of his cast and crew still live in the area. Besides a sprinkling of zombies from Dawn of the Dead (1978), actor John Amplas was there all weekend. I especially liked his character in Day of the Dead (1985) and it was a pleasure to talk to him at this his first convention appearance. Amplas appeared in many other Romero films, notably as the title character of the modern-day vampire film Martin (1977), but nowadays he teaches acting at a Pittsburgh university. 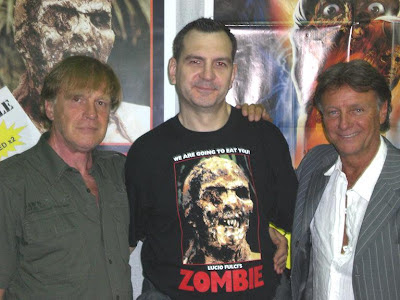 It wasn't all about American horror films - I also met a zombie and a zombie-slayer a long way from their homeland of Italy. Al Cliver and Ottaviano Dell'Acqua both appeared in the awesome Zombie Flesh Eaters (1979). Cliver, who sported a beard in his Lucio Fulci films back then, is now clean-shaven and speaks pretty good English, thanks to his American wife. Of course, I'm used to him being dubbed into English!

Far less recognisable was the poster zombie from the film, the fearsome worm-eyed creature who still ranks as the most nightmarish undead ever. In real life, he's a good-looking Italian stuntman who appeared with his five brothers as various zombies in the film (he no longer remembers which others he played). Ottaviano is now a major stunt coordinator in Italy and was working on the new James Bond film Quantum of Solace earlier this year.

The two performers were being looked after by Mike Baronas, who has put together many of the excellent documentaries on the DVD releases of Lucio Fulci's horror films. He has his own DVD out now called Paura - Lucio Fulci Remembered: Volume 1. Again, I'll be reviewing it soon. 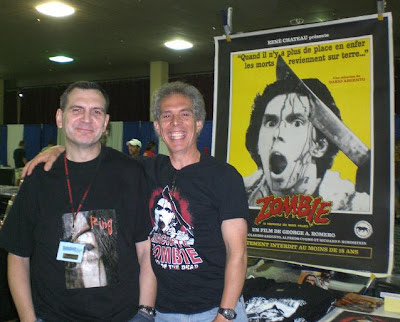 Me and ex-zombie Lenny Lies.
Who knew a machete in the head could bring such fame?

Saturday saw Griffin Dunne join David Naughton and John Landis to sign autographs all day. Out of the blue I mentioned to Naughton that I'd met the Ladies of The Evil Dead at a convention and he said he'd just made a movie with them - Brutal Massacre, a horror comedy. I also talked to Paul Davis and discovered that he only lives a few miles away from me in south London.

In the screening room, Doug Bradley, better known for playing the fearsome cenobite Pinhead in the Hellraiser series, presented the first completed episode of Spine Chillers, a successful attempt to bring the words of famous horror literature to life. In the first episode, Bradley reads H.P. Lovecraft's The Outsider, while it's illustrated by layers of impressionistic and evocative artwork. The effect was to bring the story to life without discarding the original text, like most screen adaptions do. A clip from The Outsider is online and Bradley hopes to tackle The Tell-Tale Heart by Edgar Allen Poe next. He's also thinking of getting horror celebrity narrators to work on episodes in this proposed series - but I thought he was already perfect for the job. 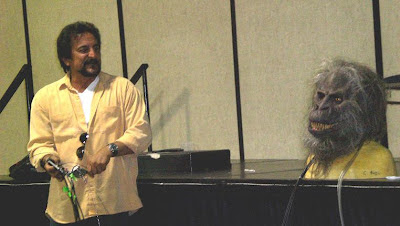 Tom Savini then appeared cracking his bullwhip, VERY LOUDLY. He also brought along the animatronic head of 'Fluffy' (the monster in the crate from George Romero's Creepshow) newly restored by Greg Nicotero. Savini talked about how his gory make-up effects for Friday the 13th and Dawn of the Dead led to a decade of fabricating similar effects for splatter and slasher films. But nowadays he only consults on special effects work, concentrating instead on acting and directing - he talked about his appearances in From Dusk Till Dawn and the forthcoming The Lost Boys 2. I particularly like his remake of Night of the Living Dead (1990), which he didn't enjoy directing at the time, but has recently rewatched and thinks better of it. 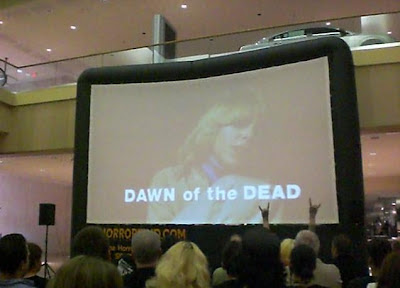 Later on was the much-anticipated screening of Dawn of the Dead at the nearby Monroeville Mall where much of the film was shot. Hundreds turned up to the event, some dressed up as zombies. Some of the original zombie cast spoke beforehand, including Mike Christopher (the Hare Krishna zombie), Clayton Hill (the sweater zombie), Sharon Hill (the nurse zombie), and the very tall Jim Krut (no wonder he lost his head to the helicopter blades).

The charity screening was held inside, at one end of the mall where the big circular fountain used to stand. There were complaints about the fuzzy sound system and the projected picture couldn't always compete with the mall lights, which were supposed to have been dimmed. But it was still a first-time event that nearly didn't happen at all, so I was thankful to have been there. It was a treat to hear 'The Gonk' muzak being played inside the mall, and a great opportunity to do a live side-by-side comparison of how the mall has changed in thirty years.

I'll soon review the documentary Beware The Moon - Remembering An American Werewolf in London at length, and will also post my own location tour of the mall.
Posted by Mark Hodgson at 12:14 am

Email ThisBlogThis!Share to TwitterShare to FacebookShare to Pinterest
Labels: zombies