Three North American horror movies from the mid 1970's where people turn into mindless, predatory animals, decades before the fast-moving 'zombies' of 28 Days Later and I Am Legend. 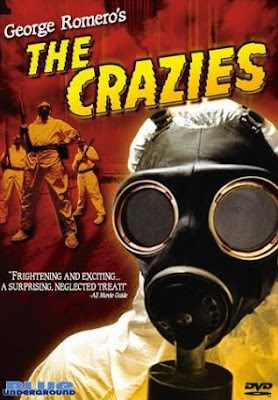 George Romero had already laid down the rules for the modern zombie genre in Night of the Living Dead (1968). But before he started with the sequels, he made The Crazies, in which society breaks down in a remote town when a military nerve gas turns everyone into psycho-killers.

While the premise had horror potential - with innocent-looking children and grannies turning homicidal – the amateurish acting has always made this a tough one for me to sit through, even when it came out. Besides the budget being too low to do ‘a city in chaos’ properly, the gore effects severely lack Tom Savini, with fake-looking limbs and even unconvincing blood.

But the ideas were ripe for recycling, and the image of the military dressed head-to-foot in white gas masks, suits and hoods proved enduring, soon appearing again in The Cassandra Crossing (1976). 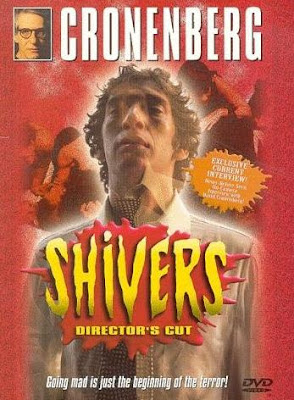 
David Cronenberg was obviously inspired by Romero’s film (he even cast Lynn Lowry from The Crazies), but added more inventive angles, like making people homicidal and sexual maniacs. Shivers was his first feature film, and he ladled out enough controversy to launch his career.

In it, a medical experiment to mutate parasites into missing organs comes to a tragic end when the doctor kills, disembowels and pours acid into the stomach of a naked schoolgirl. Little does he know, she's been sleeping around, fuelled by the parasites' sexual appetite. Now several men in her apartment block are breeding parasitic slugs of their own... internally.

While this is far more interesting than The Crazies, the amateur quality of acting is still pretty distracting, though queen of Italian horror, Barbara Steele (Mask of the Demon) is a welcome exception. Her bathtub scene is still squirmingly effective, and was the basis of many poster campaigns.

By his own admission, Cronenberg was still learning to direct during the production, but the film was still an international hit. He pushes the concept way out, and it's unusual to see sexual horror outside of the realm of vampires for once. 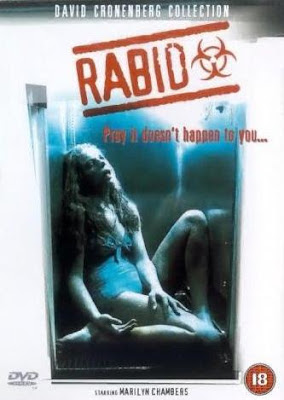 
Cronenberg tweaked and expanded the same concept of infectious psychosis for his next, far more assured film. This is the easiest of the three to recommend, with a more able cast, and a bigger budget.

Another medical experiment misfires, this time using skin-grafts. After a bike accident, Rose (Marilyn Chambers) finds herself with a vampiric spike in her armpit and a lust for human blood, not realising that she's infects her victims with rabies.

The stage is set for random violence, with Cronenberg dreaming up kills more creative than the story or the characters. Not many horror films feature a pneumatic drill as a murder weapon, or Santa Claus gunned down by a hail of machine-gun fire.

This is efficient, unusual, indie horror mayhem, from the heyday of Canadian horror, with buckets of subtext only if you want it. Watching this again, I noticed that there's no original soundtrack music, just a few library tracks repeated to exhaustion! It certainly worked at the time. Shivers and Rabid then made perfect partners on a double-bill re-release in cinemas. Check out any trailers you can find - the voice-over is a classic.

(Cronenberg then continued with a run of interesting horror films - The Brood, Scanners, and the marvellous Videodrome, before hitting the big time with his 1986 remake of The Fly).

These three quasi-zombie films were labelled as 'body horror' in the eighties, and lumped in with the remakes of The Blob and The Thing - today they're the fore-runners of today's 'fast and furious' genre of the undead.

Incidentally, the US DVD of Shivers (from Image Entertainment) looks good in 1.33 aspect ratio, but my UK edition of Rabid (from Metrodome) is severely cropped on all sides of the 16:9 frame, cramping the action and even clipping off parts of the opening titles - a case of 'widescreen edition' meaning less rather than more... but there's an interesting introductory talk from Cronenberg on both discs.
Posted by Mark Hodgson at 10:26 am