REPTILICUS (1961) a monstrous slice of Danish 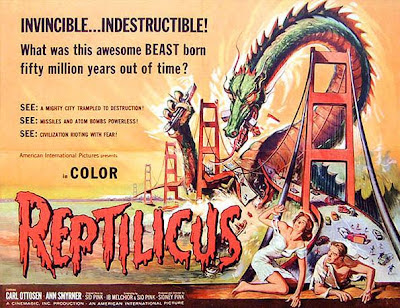 Nice poster, but the Golden Gate Bridge doesn't appear in the movie...

Denmark, the land of The Little Mermaid, has only ever made one giant monster movie - here's why...

I was very disappointed when I first saw Reptilicus a few years ago. But with repeated viewings, I’m growing to love it as enjoyably bad. It’s so very, very bad for a host of reasons. An object lesson in actors taking the story seriously, before seeing the special effects. 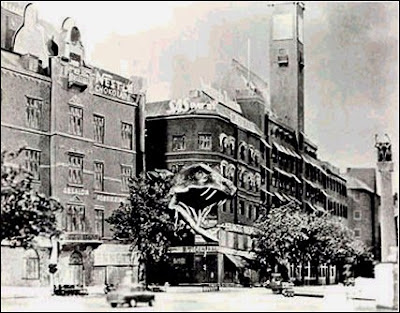 For many years, all I knew of this 1961 giant monster movie, were some fairly effective b/w stills in horror magazines. Then I got the novelisation of the story (which has a great action shot on the cover and a mention of "breasts" on every page), and a couple of brief glimpses of the monster in action, that were used as cutaways in The Monkees. 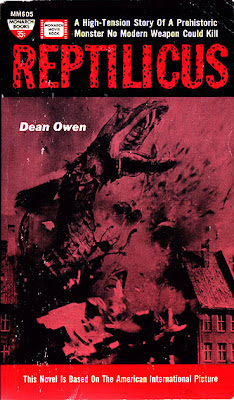 It had good credentials, beng written by Ib Melchior who wrote inventive scripts for a series of low-budget sci-fi movies, including The Angry Red Planet (1960). One of his stories was made into the awesome Roger Corman movie, Death Race 2000 (1975), so I had high hopes for Reptilicus. 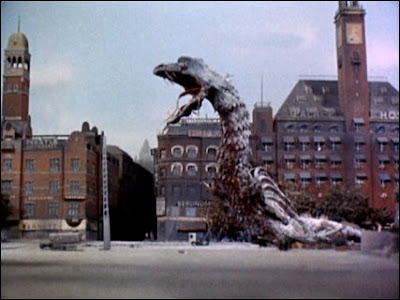 The film’s main drawback is its star, a small marionette with fewer points of articulation than the average action figure. I was flabbergasted at how small the models of the buildings were – hugely unconvincing for a horror movie supposedly pitched at an adult audience! The puppet has wings that barely move, legs that don’t move - when it ‘walks’, it’s obviously being dragged!

Worse still, the film was shot in Denmark. Each scene was shot twice, with the same cast members performing each scene in English then Danish. Most of the dialogue in the US version was redubbed to sound more convincing. According to director Sid Pink, it was because the actors were talking with a strong “sing-song” accent (like the Swedish chef in The Muppet Show).

The American producers were appalled with the US version and drastically re-edited it, shot new footage, and tried to elaborate the existing monster footage, but cheaply, delaying the US release until 1963.

I first saw the US version, and have just got hold of the Danish DVD release from last year. Here’s the major differences between the two versions (for the minor differences, there's a whole book on the making of this film, Reptilicus: The Screenplay by Kip Doto. See also Video Watchdog magazine, issue 96, for a cross-analysis).

The US version has more gore - like the early close ups of chopped meat that come up in the giant drill bit. (Ah yes, the plot, some miners discover a giant, frozen disembodied tail. When it accidentally defrosts, it regenerates into a dinosaur and marches on Copenhagen - see?) 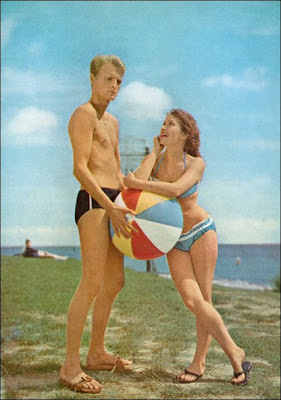 Denmark is also treated to extra scenes of Petersen, the comedy-relief lab assistant (who dresses in overalls like a hick farmer), played by Denmark’s favourite comedian Dirch Passer. With his square head and goggle-eyes, he looks like something drawn by Jack Kirby. The Danish version has been restored for DVD to be part of a collection of Passer's films, so I won't be too hard on him. Mind you, the scene where he sings the 'Tilicus' song to a sudden group of children outside the lab, is a real lowpoint... in the history of cinema. Much of Passer’s comedy schtick, and this song are missing from the US version.

The USA still left in the other embarrassing song, in what I call the 'travelogue section' of the movie. As the carefree characters explore the delights of downtown Copenhagen, oblivious to impending doom. The army officer in charge of operations takes time to call in at a bar in Tivoli pleasure gardens to hear 'Tivoli Nights', sung with gusto by the perky Birthe Wilke ("Denmark’s answer to Doris Day" according to Wikipedia). She does her best with the clunky lyrics like...

"You're all dressed up and with a smile on your face,
You look as gay as can be." 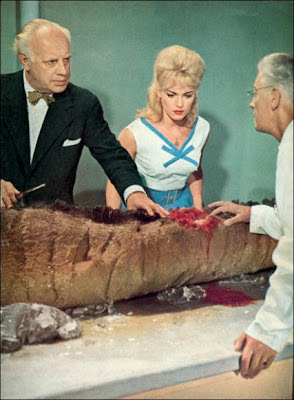 In the slow first half of the movie, the US version tries to ramp up suspense, with gory close-ups of the disembodied tail removed from the drilling excavations.

The Danish version dilutes the scary early scenes in favour of comedy, courtesy of Petersen. Then around halfway, the film gives up being coy and turns into bloody monster mayhem. 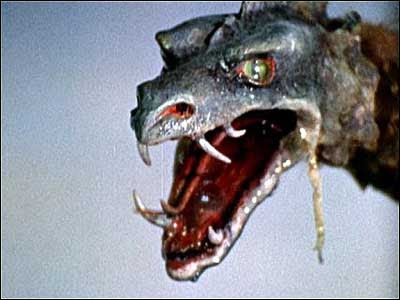 The puppet trashes some small models, but then the budget spurts and splashes out on a fullsize claw that flattens a farmhouse set, narrowly missing the farmers. A shot strangely left out of the US version, because it's not badly done.

The US also loses the fabled, wooden, flying shots of the monster. All other shots of Reptilicus, they try and enhance by zooming in (optically, making the shots look poorly composed and grainy). Some other shots are slowed down, meaning you can take your time looking at the grain on each frame. Worse still is the addition of the, ahem, green slime - optically added "acid" that seems to come out of the monster's mouth and splash over the lens, then freeze. Worst of all is the placing of what look likes a crayon drawing of a farmer, positioned over the lizard's mouth, to make it look like he’s being eaten.

The original FX may be primitive, but these additions make them laughably worse. Together with the bilingual acting, unspectacular locations, and loosely re-dubbed dialogue, makes the US version a veritable punchbag of a movie.

On a trivial note, when the monster is depth-charged by the Navy, it loses a leg, in a shot that I swear was copied and included in Steven Spielberg's monster opus, Jaws (1975). 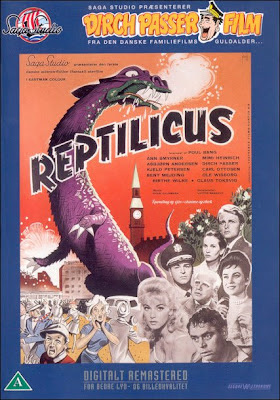 The Danish DVD has a trailer - which wisely contains no shots of the puppet. The picture is a slightly cramped 1.33, but it may have been released this way. The print is well-presented and in good condition for 45 year-old Eastmancolour. The PAL running time is 92 mins. 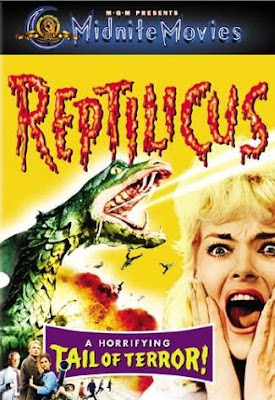 The region 1 Midnight Movie DVD is no frills, a bit like the monster in the US version. It's also 1.33.

The choice is yours, optical green glop and extra gore, or half-naked Danes and the original cut.

German site Monstrula has an absolutely AWESOME collection of international photos and posters (and toys!) for Reptilicus and many more marvellous monster movies, mmm.

The US trailer for Reptilicus is currently here on YouTube...

Email ThisBlogThis!Share to TwitterShare to FacebookShare to Pinterest
Labels: monsters