The region 3 DVD cover art
CURSE OF THE GOLDEN FLOWER
(2006, Hong Kong/China, IMDB: Man cheng jin dai huang jin jia)
Opening in UK cinemas on April 13th.
Out now on region 3 DVD in Hong Kong, and region 1 in the USA.
Coming to Blu-Ray HD at the end of May.
Recommended - a highly entertaining epic costume drama
In Phuket, an island off the west of Thailand, I went to see the new epic from Zhang Yimou, the director of House of the Flying Daggers and Hero. It was dubbed in Thai with English and Chinese subtitles.

The story begins as a high-powered drama, where all is not well between the Emperor of China, the Empress and their three sons. The Empress’ health is failing, but this doesn’t stop her from trying to continue a relationship with her son, who’s just returned from war.

As the implications of their secret relationship escalate, the royal house is thrown into full-scale battle, with itself. 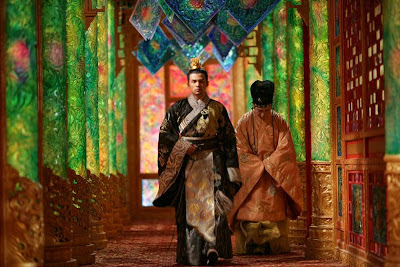 The film begins by introducing us to the all the characters in the impeccably lush rainbow-coloured interior of the Emperor’s palace. After a relatively low-key start, the films first action scenes immediately impress.

I loved the black-clad warriors most of all, (with similar skills to Japanese ninja), whose weapons are flying scimitars on chains! Also used as grappling hooks, these silent killers can also anchor in the ground, allowing the warriors to attack from clifftops and sail down the chains on hollow bamboo grips.

But no one is as helpless as they appear. Every character seems to be an advanced master of martial arts. This may unintentionally amuse, as may some of the acting. As bad karma boomerangs on the baddies, emotions reach fever-pitch, but not too subtly. The exception here is Jay Chou who underplays as usual, showing little more range than his turn as the boy racer in Initial D – The Movie. 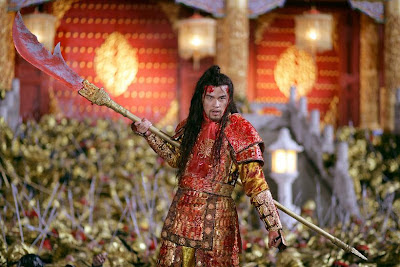 The legendary Chow Yun Fat is almost unrecognizable as the bearded Emperor. Gong Li (Memoirs of a Geisha) looks both regal and dangerous as the Empress, but overdoes the twitching. Liu Ye, as her illicit lover, ascends to levels of 'mad' acting not seen since Cary Elwes in Saw. The acting isn’t nearly as even as House of Flying Daggers, but here, I guess, the stakes are far higher…

The battle scenes between the factions eventually fill the immense courtyard of the Emperor’s Palace, turning it into a huge, bloody chessboard. Aided by a multitude of computer graphic warriors, the action is still exciting and plot-driven.

I can’t tell you just how much of the epic action had been faked because the print I saw (in Thailand) was quite soft, but I still think there are many scenes that have been done large-scale with a traditional cast of thousands. All dressed in highly ornate colour-coded suits of armour, it’s imaginatively spectacular.

The acting and the operatic drama are enjoyably over-the-top - it seemed to complement the impossible fighting skills on display.