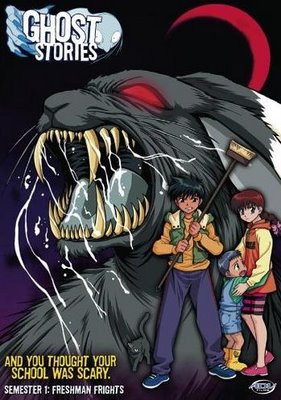 This anime series is not to be confused with the four films known as Haunted School (1996 to 1999), or even the short story TV horror series, Gakko no Kaidan G (1998) which was also live action.

This is an anime series that uses the same urban legends, or scary stories, told about Japanese schools that the film series used for a basis. So various familiar ghosts and situations from the films also turn up in this anime. Seems too much of a coincidence for the anime to have appeared just as the film series ended.

It has a likeable gang of ghostbusters, centred around Satsuki, a young schoolgirl, her little brother and their father. Her late mother has bequeathed Satsuki her notebook in which she describes neighbourhood hauntings and how to solve them. 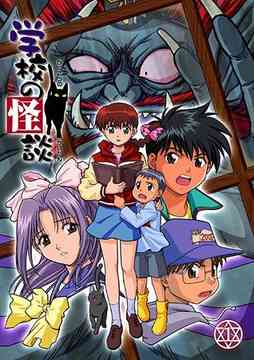 Japanese DVD cover artwork showing Satsuki and her mother's diary
Satsuki and her friends like to investigate hauntings and ghostly occurences that either take place at the school, that affect schoolchildren or even just occur locally. Thankfully, the action in the series doesn't spend too much time in schoolrooms, like so many anime series seem to.
The troubled spirits are all pretty spectacular, ranging from murderous dolls and giant killer rabbits, to the more traditional snow ghosts and demons (one of whom possesses the family cat!). If they're not big, they're usually still creepy, many of them with murder in mind.

It's intended as family viewing, but I really enjoy this series. It's like a Japanese Scooby Doo, but with real spirits and some effective scares, verging on Ring intensity! The interplay between the children is played for laughs, but they often get terrified, with Satsuki's little brother spending a lot of the time crying, like a real toddler would.

It's evidently produced using electronic animation (as opposed to painted cels), with many effective effects being generated in an edit suite instead of using animation. This works well for the most part, and there's some interesting point-of-view CGI shots too. 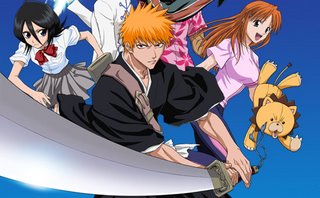 Some of the characters from Bleach
The director of the series is Noriyuki Abe, who is now working on the very successful anime Bleach, which has topped 100 episodes and just spawned an animated feature film. Bleach is also about schoolkids fighting unseen demons - but here it's teenagers and they use samurai swords and magic powers to save lost souls. It's action-packed, but again has well-designed characters and plenty of humour. Coincidentally, the central family is also missing the mother.

Ghost Stories/Gakko no Kaidan is one of the few anime that I've enjoyed that has had an uncut subtitled release - all 20 episodes are on DVD in the US over 5 volumes, with optional Japanese audio.

The only drawback was that ADV chose to also dub the series into English and litter the dialogue with inappropriately sexual and racial references as well as many American in-jokes. The audio is of course at odds with the young ages of the characters and the obviously Japanese setting. 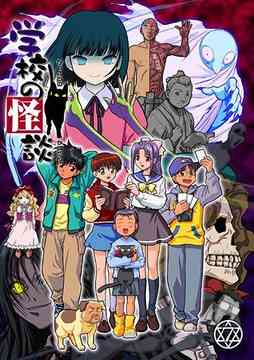 Japanese DVD cover artwork showing the gang and their adversaries

But if you can cope with reading subtitles, I'd recommend the whole Region 1 set. The Japanese set is spread over 7 DVDs and has no subtitles.