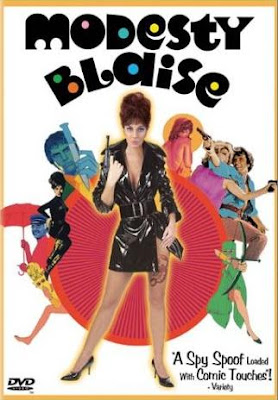 I really wish this was good, but it always disappoints. It fits into two sub-genres of the sixties that I really enjoy. Lightweight comedy spy flicks - the ones that Austin Powers movies reference – like Our Man Flint and Casino Royale (1967), and also comic strip adaptions - a more varied bunch than the endless Marvel Comics franchises that we’re choking on at the moment - like Batman, Barbarella and Danger: Diabolik.

Unfortunately Modesty Blaise is the least watchable in both camps, despite having enough talent to have made it the best. With Joseph Losey directing, one expects daring and gritty dramas. The Servant, King and Country and Accident (all also starring Dirk Bogarde) are all heralded British films that critics agree are the work of a quality auteur. But they forget to mention Losey’s disastrous lapses with Modesty Blaise and Boom! (possibly Elizabeth Taylor’s worst movie). 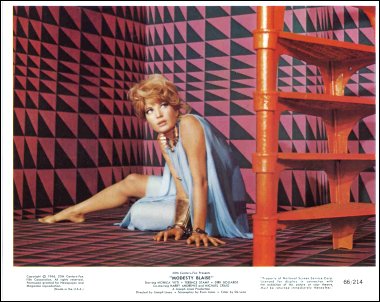 Monica Vitti as Modesty uncannily looks the part, is devastatingly glamorous and a natural comedy actress to boot. Terence Stamp was at his sexiest too. Dirk Bogarde is blond arch-villain Gabriel, Clive Revill has a dual role as his book-keeping sidekick and an Arab sheik… 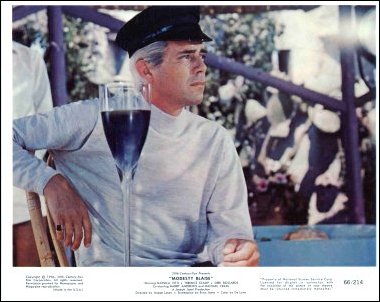 To digress for a second – it’s sad when talented actors are hot one moment and then dropped the next. Clive Revill was great in comedies, often playing Russians, and could hold his own as a lead (The Legend of Hell House) but disappeared Stateside to do TV and still does high profile voiceover work in animation. I guess his turn as the voice of the Emperor in The Empire Strikes Back changed his life.

Michael Craig too, here playing an MP being twisted around Modesty’s little finger, was a familiar face in sixties movies. He lead the castaways in Mysterious Island, but his film career was buried alive with Vault of Horror (1973), and he’s been working on stage and TV ever since.

So, Modesty Blaise - the cast is good, what’s wrong with the film? I’d say that the director was extremely condescending about adapting a 'comic strip'. So much so, that he refuses to take the characters, the premise or any of the action seriously. Most of the fights are played for comedy, especially the climactic battle. Losey seems to lose interest whenever the plot is involved, instead pushing the camera towards close-ups of pop culture fads, fashions and furniture, while making in-jokes, most of which we don’t get.

Losey’s humorous touches may have been warranted if they’d been funny. Only the occasional black comedy works, and it’s especially sadistic, even for James Bond. The scene where Gabriel’s ‘wife’, Mrs Fothergill, silently tortures a mime, and the use of a dead body to counterweight an escape down a cliff, are both grimly amusing.

Apart from Johnny Dankworth’s theme tune, the music is ill-chosen and rarely complements the mood or the action, instead being used to amuse. The monk serenading Gabriel on the church organ, as he arrives on his island, seems to go on forever. The cacophony of barrel-organs during the Amsterdam knife fight is totally distracting. The songs that Vitti and Stamp are required to sing are just embarrassing. 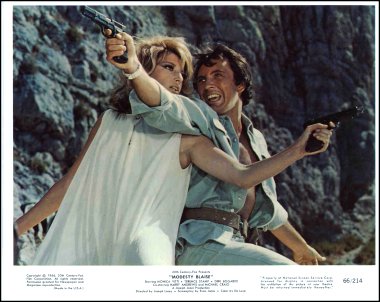 Maybe with different music, a different edit (too long at two hours) and tighter post-synching, this could have been, should have been, a whole lot better. Though the groovy sets and fashions make this an excellent choice to play in the background at a party, but with the sound down! An odd recommendation, I know.

Mostly shot on location in Amsterdam and Naples, particularly spectacular are Gabriel’s clifftop monastery (actually in Sicily, I believe) and the un-exciting car chase up and down the winding roads of Mount Vesuvius (which is where I've just been and why I watched this again).

The Region 1 DVD (from 20th Century Fox) has absolutely no frills or notes, but is presented anamorphic widescreen 1.85 for the first time. The mono and stereo audio tracks sound a little dull, which is very apt. 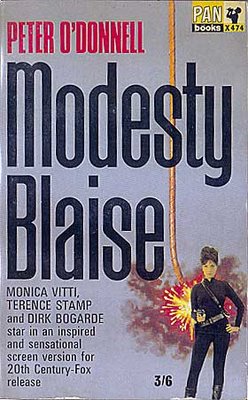 Modesty's creator wrote the movie tie-in novel, launching the comic strip heroine as a successful literary character - the best thing that came of the film!
Posted by Mark Hodgson at 5:03 pm