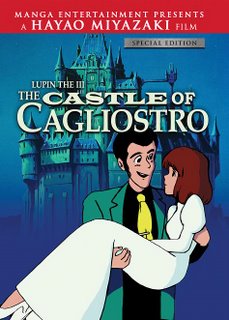 Hiyao Miyazaki to the rescue

ANIME IN THE WEST
Like many western fans, my interest in anime really started with Akira. But the anime that followed in the west, were sold primarily on the basis of sex and violence. For a short time, this strategy worked, but such cynical marketing had a negative effect. It quashed the possibility of getting a wider audience for subsequent releases of anime feature films or TV.

Public consensus still misunderstands anime as being dominated by half-naked schoolgirls and extreme violence, whereas in reality it is as varied in tone as any fiction-based, live-action TV. Besdies anime for the very young, there’s sci-fi, horror, romcoms… all genres for all ages. The controversial stuff was only in a tiny minority of releases.

Akira did lead to an interest in what else Japanese animation had to offer, with a focus on other adult sci-fi anime series. But this didn’t rise above the level of ‘cult’ and enter into the mainstream. Subesequent releases like Ghost in the Shell and Final Fantasy: The Spirits Within didn't cause the same stir as Akira.

Recently, some of the most intricate, ground-breaking animated movies in the world have had terribly half-hearted cinema releases, and been overlooked by critics. Astonishing films like Appleseed, Innocence (Ghost in the Shell 2) and ironically Steam Boy (director Katsuhiro Otomo's first feature since Akira) have snuck out into cinemas without finding an audience. These are titles with challenging plots, predictive sci-fi, hugely entertaining action... that are often dumped straight onto video.

Admittedly, the west has got a lot of readjusting to do – in Japan the adult consumption of manga has removed the stigma of ‘cartoons’. At least we’re finally appreciating the films of Hiyao Miyazaki. Princess Mononoke, Spirited Away and Howl’s Moving Castle herald a new wave of anime that has found a mainstream audience. This has lead to a demand for the twenty year back-catalogue of animated films from Studio Ghibli. Indeed, in France, these older films are getting re-releases in the cinema, not just on DVD. 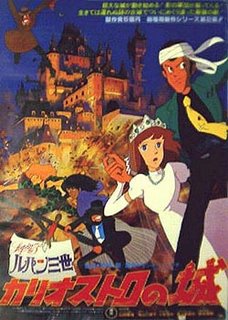 THE CASTLE OF CAGLIOSTRO
So here I am still working my way through Miyazaki’s older films – having been introduced to his work with the theatrical release of Princess Mononoke. The latest I’ve seen is The Castle of Cagliostro. A 1979 feature film made at the time when Miyazaki was moving from TV work into cinema.

For copyright reasons, it’s been obscured that the film is all about the characters from the long-running Lupin III series of manga and TV. Arch-criminal Lupin, is the grandson of Arsene Lupin of French literature, here embarking on an epic adventure with his usual accomplices, somewhere in Central Europe.

After raiding a casino, Lupin notices that rather than being incredibly rich, he merely has a carful of counterfeit cash. He decides to pursue the fake notes back to their source – the royal castle in a small duchy - Cagliostro. As he gets near, he encounters a very young bride, trying to escape the castle, and his mission suddenly becomes far more complicated and dangerous than he had ever imagined…

Even in 1979, Miyazaki has to walk a precarious tightrope between providing a family film, and being faithful to the bawdy violence of the original manga, which portrayed Lupin as a ‘ladykiller’. While there’s action, a little slapstick and some exaggerated face-pulling to please younger viewers, there’s also a little blood, lots of gun-play, a little swearing, an under-age wedding, and several characters smoking like chimneys! Like Spielberg begging the censors not to cut Jaws and Indiana Jones movies, Miyazaki has to push boundaries to keep both audiences happy.

Miyazaki and his crew also try to achieve the best animation they can. They never shy away from ambitious 'camera moves' – like point-of-view shots, or complicated tracking shots. Complex three-dimensional objects like the auto-gyro or the workings of the clock-tower would have to have been realised without the aid of computers. The results is so successful, that it's hard to guess what year it was made, the animation looks so advanced.

But the production doesn’t show off, it all serves the story. One that could equally have worked as live-action, and has been ‘laid out’ as if it were. The famous car chase is shot as if they had photographed from 'camera cars'. It’s an exciting scene, as well as funny for using tiny little French cars, rather than flashy sports models.

I was also very impressed with the the endless inventiveness in the castle buildings’ many hidden secrets. Lupin has to face underwater traps, impossible wall-climbs, crowds of ninja assassins and high tech defences. The look of the various background layouts also indicate that Miyazaki’s team must have at least done extensive picture research of Central Europe - I wouldn't be surprised that they actually visited.

Miyazaki only includes a little bit of politics in the story, and there’s very little subtext like his usual scripts. Cagliostro is a purely entertaining adventure with plenty of humour.

Also, despite an all human cast, the style of character animation is not his usual naturalistic approach, but uses exaggerated 'cartoony' actions in keeping with the humour, and in line with the manga characterisations.

THE NEW DVD SPECIAL EDITION
This Manga Entertainment DVD release is notable for a spotless transfer that makes the film look brand new. Only the occasional original animation faults (like a frame shift, or slightly rough-edged drawings), date the animation at all. The picture aspect is 1.85 anamorphic, like it’s original presentation.

There’s a 5.1 mix for the english soundtrack, as well as the original Japanese audio (which is what I listened to). The english subtitles take great pains to translate the jokes and the slang. My only criticism of the set is that the Japanese mix isn’t 5.1 and that the cover art doesn’t do the beautiful and intricate art of the animation any favours at all – it makes it look like a soppy romance, rather than a gothic James Bond adventure.

This is a flipper disc with the entire film on one side and special features on the other. There are storyboards, and an interview with the animation director, (who also worked on the first Lupin III TV anime), and a trailer for the original Japanese movie release.

If only we’d had Miyazaki films in the west 25 years ago, when they were released in Japan. He’d have given anime a good name!
Do you want to know more?

There are many Lupin III manga and anime, including more feature films. It's another huge Japanese subject to investigate...

Of course the original 'Arsene Lupin' is an anti-hero of French literature, and has been filmed many times though the years, including a big-budget French action film in 2004.

The real-life Cagliostro family of Italy is a tale in itself...

Wikipedia is a good place to start…