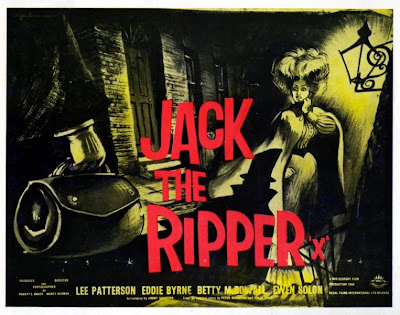 Differences in censorship between Britain and France

I've been using Horrors of the Black Museum (1959) as a benchmark of 1950s censorship. The outlandish murder weapons would suit seventies slasher movies, but while the methods are grisly, the violence is mostly implied and offscreen. The same year, another small independent production was also challenging the censor's rules on sex and violence. Jack The Ripper gives us timely insight into what was allowed in Britain, and how much more was allowed 'on the continent', before the swinging sixties had swung their first swing.

X-Cert is a new book that looks at the less talked about X-rated independent horror films of the fifties and sixties. While most of these horror films were familiar, the depth of research about their problems with the censors is invaluable. It made me take a second look at this early depiction of Jack The Ripper, author John Hamilton noting that it was the first film to actually portray Jack and his deeds directly. Many films had alluded to the story, notably Hitchcock's The Lodger (1927), but this is an (approximate) restaging of the original events. But the British censor was extremely watchful, even when it was only a script, and would have instructed the producers what would and wouldn't be acceptable in British cinemas before they'd even filmed a foot. 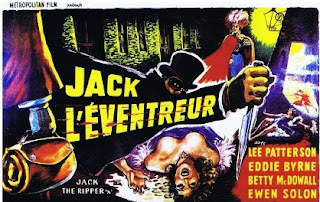 That didn't stop them from shooting more explicit scenes for the film's distribution in France. X-Cert demonstrates with some choice screengrabs the astonishing differences between the British and 'continental' versions of Jack The Ripper. Even in 1959, France allowed more violence during each murder and far more nudity throughout. With an old TV recording of the British film, and luckily the uncut French version on YouTube under the title Jack l'Éventreur, I could compare them for myself. 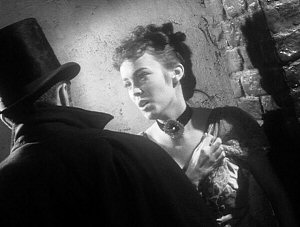 Jack The Ripper hadn't impressed me at all before. The portrayal of the murders dilute the original crimes to nothing more than muggings, and I was judging it on a 4:3 TV screening which renders much of the action cramped and confusing, tightened from its original widescreen. The French version on YouTube looks like 1.85 widescreen, roomier at the sides and showing off the carefully-framed cinematography admirably.

The tension of each murder is heightened by the use of tilted 'dutch' camera angles which don't look nearly as good within a cramped frame. I don't know whether the sepia colour 'rinse' of the YouTube version is original, but it certainly works in favour of the story, being set over a hundred years ago. If this version was on DVD with an English option, I'd definitely get it. It all looks a dozen times better than the 1.33 transfer.


This Jack The Ripper portrays the increasing panic over the murders, while the identity of the murderer plays out as a whodunnit, with a wealth of suspects. The scarred, hunchback hospital porter limping around wielding a scalpel didn't fool me though. Presumably Blood of the Vampire, from the previous year, had set a trend for ugly, lunatic hunchbacks. 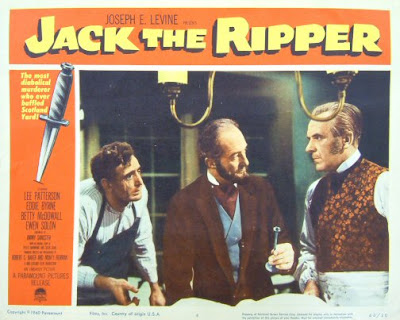 It's less low-budget than I'd remembered. The sets look good, my only quibble being that the East End of London should have been far, far busier. The cast is excellent, though largely unknown, and the investigating detectives are inexplicably American. 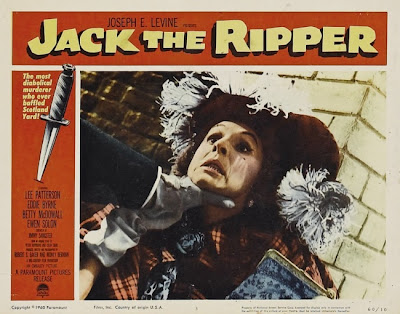 The French version lengthens each murder scene, showing more of the nasty knife. The bawdiness in the local music hall has been completely reshot so that many of the dancers are walking around topless. The amount of nudity in the dressing room scene makes Ken Russell look positively restrained. Note that the Ripper isn't hunting prostitutes, but music hall dancers. Any references to prostitution would be even more scandalous. 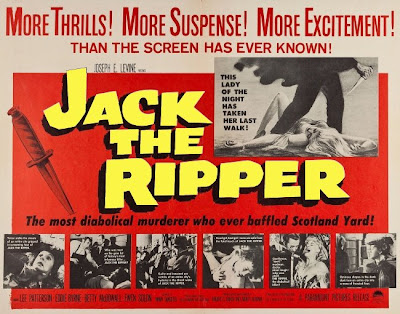 To add to all the possible variations, there's also an American version with a whole new soundtrack by a different composer. While I believe the violence and nudity are again missing, the final scene includes a single shocking shot added in colour! This scene is also currently on YouTube. More about the US version here. 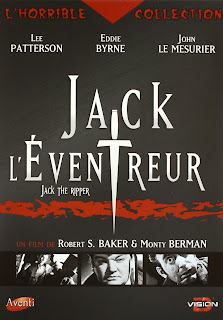 The French DVD Jack L'Eventreur appears to be cropped horizontally to 1.33 full frame, but with English audio. The French DVD is reviewed here - in French - with screengrabs. But as you can see from the two comparison screengrabs above, the YouTube version demonstrates that a widescreen presentation could reveal far more of the frame at the sides. The screengrabs in the DVD review infer that ironically it's a release of the censored UK version! 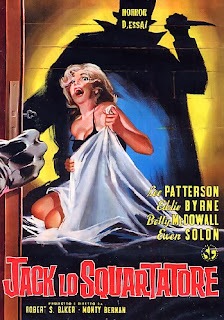 An Italian DVD release, Jack Lo Squartatore, is 16:9 anamorphic widescreen but the composition now appears vertically tight, favouring too much headroom, indicating that 1.66 could be the ideal framing. The English audio track is sharper than the Italian! The transfer isn't clear but not perfect, possibly an analogue source, but the censor cuts are added as an extra, in even poorer condition.

A definitive DVD release would need a reframed transfer and some restoration. But this is just as scary and as much fun as many of the Ripper movies we've seen since. 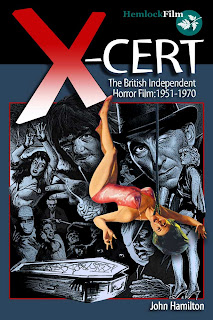 More lobby cards and posters from this early Jack the Ripper here.