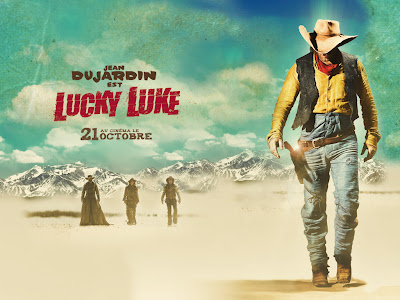 Lucky Luke, cowboy, sharpshooter, drifter, do-gooder... Renowned for his heroics across the wild west, Luke is summoned by the President of the United States to help unite the country by clearing the last obstacle to the trans-American railroad - the lawless Daisy Town. But this may prove too big a job for just one cowboy...

Like Tintin, Lucky Luke started as a Belgian comic strip. First appearing in 1946, the character became hugely popular across Europe, but not so much in the UK or US. It spawned cartoon series, two live-action movies (1991) and a TV series (1992) aptly starring spaghetti western veteran Terence Hill (They Call Me Trinity). 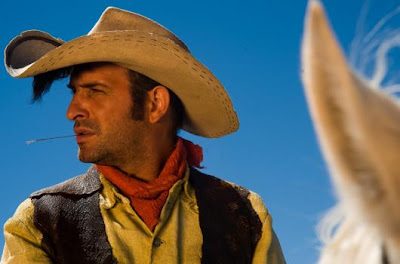 Also like Tintin, the cartoon character has had to move with the times. But the movie playfully references many of his earlier traits, like the cigarette that used to hang from his mouth... Writer/director James Huth also humorously turns many movie western cliches on their heads. 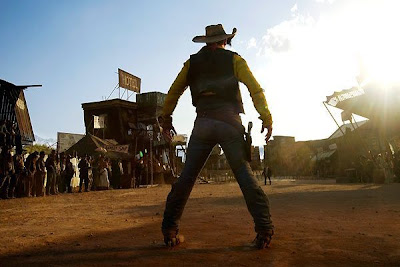 At times, he uses brash colour schemes, like early comic books, for certain scenes and even single shots, making it look almost experimental at times. Comic book humour extends to visual gags as wild as the silent movies. I loved the President's train carriage with it's thick, static ceiling of smoke, and the population of terrified townspeople hiding and moving around in upturned water barrels. 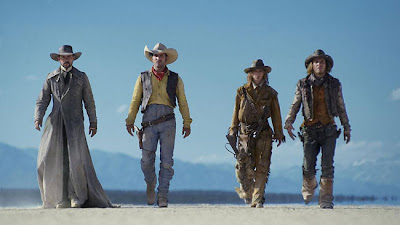 The range of bizarre characters and offbeat approach to the cowboy genre, where half the population (somehow) have hearts of gold, reminded me of Gore Verbinski's similarly enjoyable Rango. Calamity Jane looks more cowboy than cowgirl, Billy The Kid is a childish adult and Jesse James is a failed actor, with a magnificently overlong longcoat. Even Luke's horse is a character. 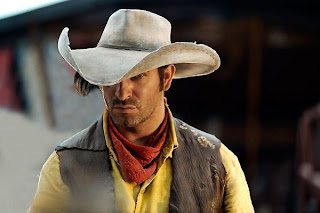 The desert location work (shot in Argentina) and impressive scale of the film makes this one very overlooked movie. For me it was a far more rewarding experience than The Artist, perhaps because that was overhyped and this was underhyped. This is funner, but not Jean DuJardin at his funniest. You need the two OSS 117 films, Cairo - Nest of Spies (2006) and Lost In Rio (2009) to see his full comic range. 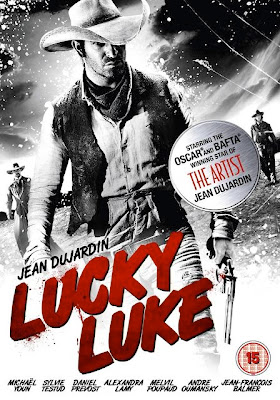 The cover art for the UK DVD sneakily presents DuJardin in black and white, alluding to The Artist, but this movie is totally drenched in colour. It's presented in French with English subtitles and no extras. If Amazon.fr is to be trusted, the Blu-ray sold in France also has English subtitles on it.