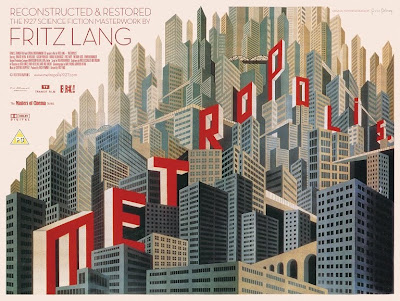 METROPOLIS
(1927, Germany)
Longest ever restoration of this early epic sci-fi.

I was excited to see a near-complete restoration of Fritz Lang’s Metropolis, which premiered in the UK last week. It was also my first time seeing any version on the big screen. The same way German silent films like The Golem (1920) and Nosferatu (1922) inspired the golden age of US horror in the 1930s, the silent epic Metropolis influenced science-fiction films for decades to come. Blade Runner (1982) is perhaps the most famous vision of the future that drew on Metropolis which, ironically, was also an expensive flop on its first release. 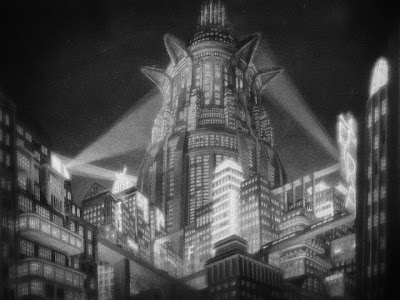 With a humanoid robot passing as human, impossibly high buildings, the underclass of society existing in the lower levels... there weren't many films that Ridley Scott could have looked to that were thematically similar and visually inspirational. I was surprised by a scene in Metropolis where the hero runs through a dark mass of gridlocked cars, an uncanny reminder of the central chase scene in Blade Runner. All that was missing was the rain. The climax of Metropolis also reminded me just how much Tim Burton borrowed for the ending of Batman (1989) – more than just a homage! 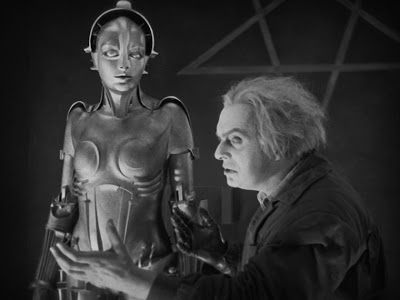 The story pivots on Joh Fredersen, the master of a futuristic city, his idealistic son Freder, and a young woman, Maria, dedicated to improving the plight of the hard-working underclass. Fredersen wants to sabotage her revolutionary work and turns to Rotwang, a (really quite mad) scientist. He’s impressively built a humanoid robot. Better still, he can perfectly disguise it as Maria, so that she can mislead the rebel workers. But this complex and sneaky plan could backfire on Federsen’s empire and the city of Metropolis itself... 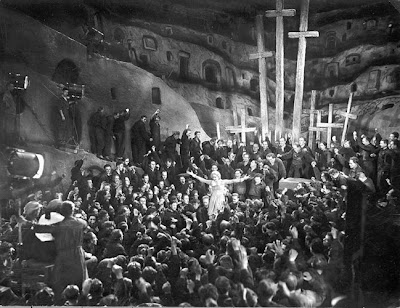 While the skyscraping city was a projected glimpse of the future inspired by a trip that the director took to Manhattan, the story reads more like children’s fable than sci-fi. Huge crowds of citizens, like the factory workers, surreally act with a ‘hive mind’ even when they're off-duty. This simplistic unity of purpose reminded me of communist Russian cinema of the same era. While the swarms of extras are undeniably impressive, it’s tough to believe all those people would all make the same mistake (like forgetting about their children behind during a disaster). 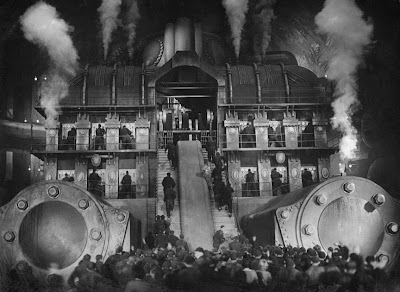 The plot isn’t as strong as the striking visuals of men and machines, (men as machines), and the production design of a future city life and science. Some of the shots made me feel that I was being hit in the eye, a powerful overdose of visual imagination - the bizarre garden, the rare close-ups of the robot, the dreamlike mini-epic tale of Babel… are all powerful as still photos, but deserve to be seen brought to life. 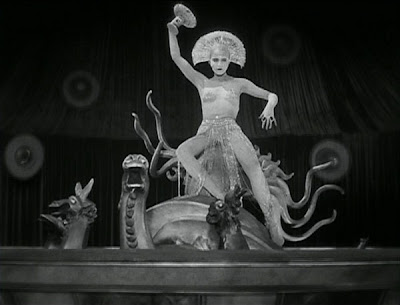 Like Blade Runner and 2001 - A Space Odyssey, the visual effects set a high standard for science-fiction for decades. Using extensive large-scale modelwork, matte paintings and huge working sets, many seamlessly combined with models (using the in-camera Schufftan process). I’m also still impressed by the superb make-up work on the living statue of death, besides the iconic ‘robot Maria’. Talking of visual effects, her phenomenal near-nude dance is so powerful a scene, it’s still risqué today. Not for her costume, but the reaction of the panting crowd. 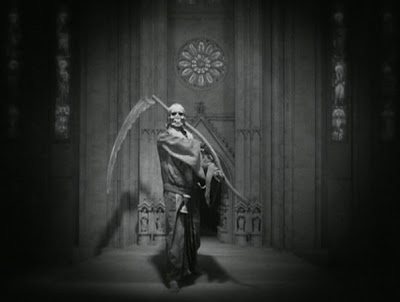 Metropolis premiered in Germany in January 1927. It had cost over a million dollars (back then). But within months, it was released in the US in a much shorter version, with its dialogue and narrative intertitle cards rewritten. This US version remained the worldwide template for decades, with the original German negative presumably destroyed in WW2. 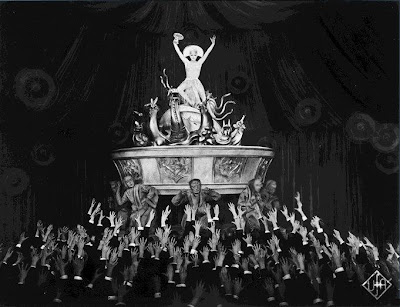 A series of restorations have gradually clawed back footage, minute by minute, up to a running time of two hours for the 2002 restoration, (released on DVD by Kino as the Restored Authorised Edition). This version was in the process of being remastered for a Blu-Ray release, when most of the remaining footage was dramatically re-discovered in Argentina. The film is almost complete now, at 147 minutes out of the original 152. 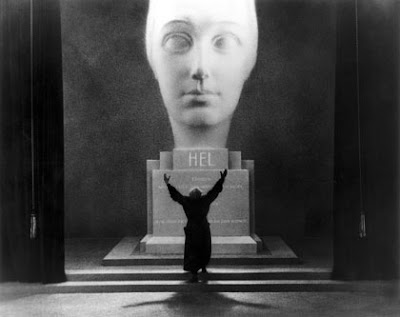 The retrieved footage fleshes out almost every scene, but particularly clarifies Rotwang’s motives, and restores the part of Federsen’s creepy spy (Fritz Rasp), who strongly reminded me of film critic and Exorcist-fanatic Mark Kermode. Rasp was also the leering baddie who victimised Louise Brooks in Diary of a Lost Girl. He went on to appear in Lang’s more predictive sci-fi Woman in the Moon the same year (1929).

The downside is that this 25 minutes of newly recovered footage is heavily scratched and taken from 16mm film. It carries the missing narrative and reveals what we’ve been missing, but pales in comparison with the startling detail of the renovated 35mm footage. This can now be appreciated in more detail in the cinema and on the forthcoming Blu-Rays. 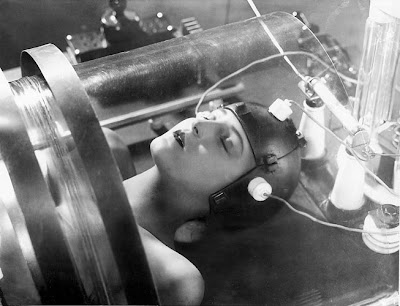 Misleadingly called ‘The Complete Metropolis’, it’s a miraculous restoration. The new recording of the original orchestral accompaniment helps the film enormously, adding to the energy and pace and sounding remarkably modern.

To me, the action still looks ‘sped up’. Some of the actors’ movements verge on comical, especially when young Feder is running around trying to save the day - at times he resembles The Flash. There are conflicting reports about the original projection and recording speed, but if it were slowed down to show more realistic motion, the running time would of course be even longer. 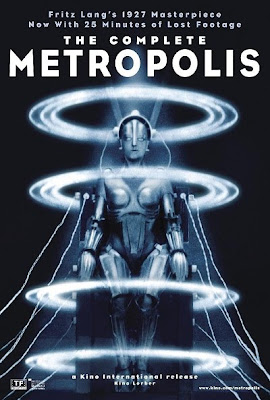 The new (almost-complete) Metropolis opens across UK cinemas on September 10th. There are also two special screenings with a live orchestra playing the original score at The Roundhouse on October 10th and 11th, details here. The BFI will continue to screen the film in November and December. In November the Blu-Ray lands in the US, then later in the UK.

The new restoration trailer, with a taste of the re-recorded original music is here on YouTube... 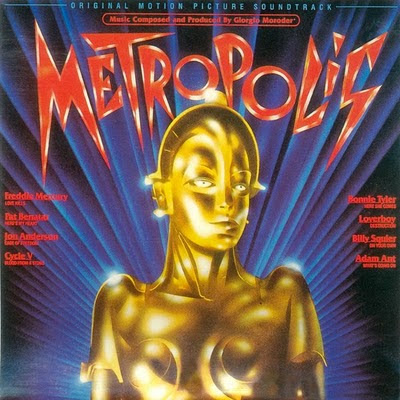 Running nearly two and half hours, 'The Complete Metropolis' may challenge the patience of anyone unused to black-and-white, let alone silent cinema. While I’m dedicated to the director’s original vision, I’ll also recommend a possibly more accessible version, the 1984 restoration. It offered colour tinting, an 87 minute duration, a cavalcade of eighties 'soft rock' music (including Freddie Mercury, Pat Benatar and Giorgio Moroder), and all the best highlights and visuals. The intertitles were transformed into subtitles and the framerate slowed to 24fps. But good luck trying to find it... last seen on VHS and laserdisc.

Another fan review with some great photos from missing scenes on the Libertas site.

Rare behind the scenes photos on this German site StyleMag....

Some before and after films of restoration of the new footage by Scientific Media.