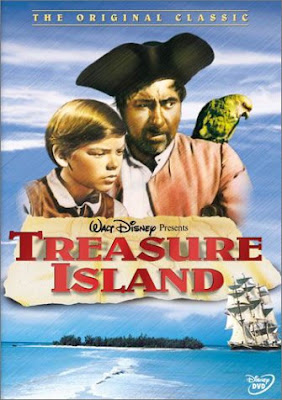 TREASURE ISLAND
(1950, USA)
This was a joy to watch because of the master of all pirate performances, Robert Newton as Long John Silver. Arrrrrr!

Why else am I recommending a 60-year old Disney film? Well, because it's action-packed fun, and... it's not very different from a classic Hammer film, honestly! Non-stop peril, death round every corner, insane characters, and menacing hand-to-hand combat. If you like the 'high adventure' Hammer films, like Captain Clegg and Pirates of Blood River (recently released on DVD), then this is practically the same in content and atmosphere! For decades, pirate stories were a staple part of fantasy adventures for boys. Robert Louis Stevenson's novel Treasure Island is the perfect example, a tight relentless story where a young boy is in the middle of pirates, treasure, villainy, mutiny and parrots on shoulders. Seeing this version in the cinema in the 1960s, I was transported to a faraway tropical island where pirates buried treasure. Watching it again, I now realise it was mostly filmed at Pinewood Studios, and in the same London park (with THAT lake) so familiar from many Hammer films. Another childhood dream smashed on the rocks!

Stevenson should be familiar to horror fans because his stories also spawned dozens of adaptions of The Strange Case of Dr Jekyll and Mr Hyde, as well as Val Lewton's The Body Snatcher (1945). 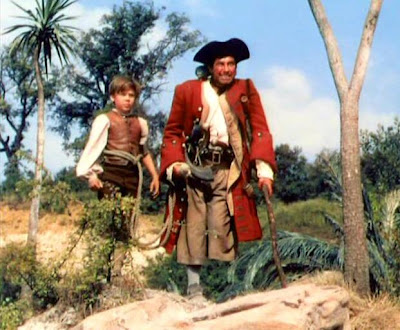 Treasure Island was the start of a hugely successful pirate theme for Disney, long before Pirates of the Caribbean the ride, let alone the movies. It also predates the historical high sea adventure 20,000 Leagues Under The Sea and Captain Hook and his pirate crew in Peter Pan. It was Disney's first completely live-action film, made to compensate for the huge cost of making animated films. Director Byron Haskin (in the 1984 booklength DGA interview) also recalls that Disney saw it as a gangster picture, and called in Haskin for that reason.

Such a perfect adaption of the classic tale, it was still playing in cinemas when I saw it on a double-bill with Sleeping Beauty. Watching it again recently, I was amazed that I could remember so many scenes so vividly: Jim Hawkins getting into peril so often, the fear of his close scrapes must have imprinted themselves. We're not talking 'mild scenes of danger', but more like horror movie strength terror - as Jim gets repeatedly cornered by bloodthirsty pirates with guns, sabres and nasty-looking knives. People getting shot in the face, skewered with swords, spiked with daggers... It's astonishing this still sells under the lowest film classification in the UK! 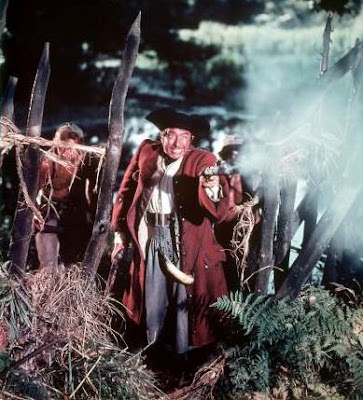 Treasure Island looks spectacular, being filmed in three-strip Technicolor, when that was a hugely expensive process to use. Special optical effects help to recreate period towns and ships, mostly by using beautiful matte paintings. Byron Haskin had plenty of technical expertise with visual effects - three years later he made the original The War of the Worlds. There's a strange over-reliance on jarring back-projection. But if you want Black Park in the background, why not shoot in Black Park? It's right next to the studio!

The casting of the actors is painstakingly apt for every character - this
production nails every single one... to the yard arm. Robert Newton was English, but found fame in America. Anyone who's ever imitated a pirate by going "arrrrrr" owes him a debt. This is THE movie pirate with the missing leg, the crutch, the green parrot on rhe shoukder ("pieces of eight") and THAT pirate accent. Definitive, hilarious and creatively used in the film. "Arrrrr-men!" 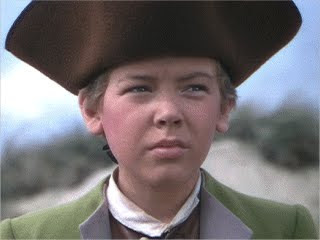 Bobby Driscoll as young Jim 'awkins was already child star for Disney, his most famous role would later be the voice of Peter Pan. He was also the child lead in Disney's first feature-length live-action movie The Song of the South (1946) which is currently 'out of circulation' while Disney decide whether the depiction of African-Americans can be unleashed on the public again. With it's pioneering mix of live-action and animation and positive portrayals of a largely black cast, especially the sensitive performance by star James Baskett, who won an Academy Award as Uncle Remus, there's no question it should be released on DVD.

Shot in England, the rest of the cast is made up of British character actors, many familiar from children's TV, such as Sam Kydd (Orlando, Island of Terror). John Laurie as Blind Pew has such an hilariously thick, Scottish(?) accent that he's almost completely unintelligible. Frightening though. (When did American audiences lose the willingness to understand regional British accents?) Laurie's long career spanned from early Alfred Hitchcock films to Hammer horror (The Reptile). Though he's most famous for the sitcom (and spin-off movie) Dad's Army. 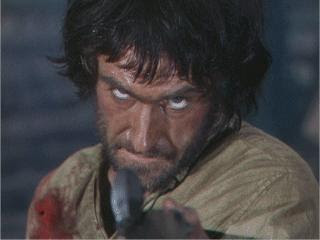 Over a decade before he was the second Doctor Who, Patrick Troughton has a great scene as a fearsomely swashbuckling pirate. A serious character actor, he also appeared in Harryhausen's Jason and the Argonauts and Hammer's Scars of Dracula. 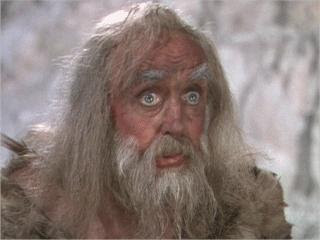 The incredible Geoffrey Wilkinson almost leaps off the screen as Ben Gunn, but only has one movie credit on IMDB (a mistake?). An incredibly lunatic performance, his voice, manner and obsession with treasure reminded us immediately of Andy Serkis as Gollum. He gets some priceless one-liners, "Many a night, I dreamed of cheese". Haskin mentions that they almost got Alec Guinness for the role! In honesty, I don't think he could have matched Wilkinson's level of manic insanity!

Screengrabs of all the characters can be seen at Aveley man.

The DVD (pictured as top) is presented 4:3 full-frame, which is how early 1950s films were usually framed. In Britain it has U certificate - the censors somehow allowed the pistol shots in the face... 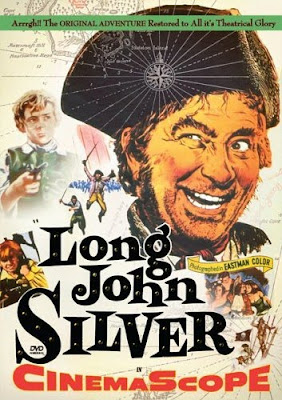 In 1954, Newton appeared again in two non-Disney sequels, both called Long John Silver. One was also directed by Byron Haskin, and featured a completely unrecognisable Rod Taylor (The Birds, Inglourious Basterds) as a blinded wildman. While it picks up from the events of Treasure Island, it's very slow-going until the last half hour, when they eventually reach the island! The other was a B-movie starring Tab Hunter. Newton also starred in an Australian TV series, The Adventures of Long John Silver. Sadly this late career spurt ended with bankruptcy, and he was dead through alcoholism, aged 50. Dammit.
His definitive portrayal of the ultimate pirate lives on, anywhere there's fancy dress, a crutch and a parrot. Arrrrrrrr!