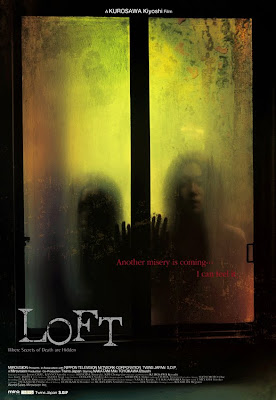 A young writer is sent to a remote house to concentrate on her next novel. But she notices some strangeness happening in the house opposite. Like a handsome man carrying what looks like a dead body in a sheet. Intrigued by both him and what he's doing, she investigates the house and discovers a 1000-year old corpse. The mummified body might also be connected to why she's started vomiting up black mud... 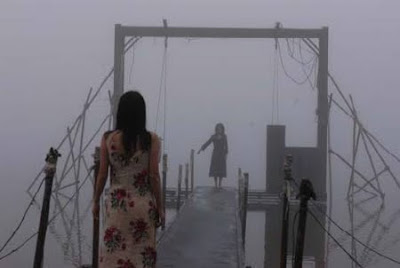 Kiyoshi Kurosawa's Kairo (Pulse) helped lead the J-horror boom - with even more creepiness than Ring and matching it's shock moments as well. I've kept trying his movies, enjoying Sakebi (Retribution) despite not fully understanding it. Kurosawa's films seem to fit inside the horror genre, but often meander into the world of arthouse, where symbolism and mood are often more important than story. I've enjoyed his films by immersing myself in their atmosphere, without concentrating too much on the intricacies of narrative and character and what he's actually trying to say. 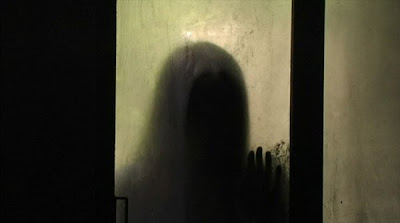 But I'm annoyed with Loft. Spoiling a perfectly fine horror film in the last segment of the film. While slow-moving, there's plenty of scares and creep-outs, but suddenly the characters are acting all, well, out-of-character and the cameraman seems to, well, fall over. It then gets back on track after a strange series of creative freakouts, but the final capper to the whole film hangs on a very poor special effect, that could almost be an intentional joke, and a pratfall. I'm not amused.

You'll have probably seen the leading actors - Miki Nakatani as Reiko the writer, also played Mai in Ring and Ring 2 as well as starring in Memories of Matsuko. Etsushi Toyokawa as the distinctive-looking professor was also the black-clad super-baddie in Yokai Daisenso - The Great Goblin War.

This reviewer for Cinema Strikes Back identifies elements of satire in the film - I wish I'd known beforehand. But even accepting that the director is playing with the genre, there are several sloppy scare moments that simply look mis-timed (like the hand on the corner of the window, featured heavily in the posters). 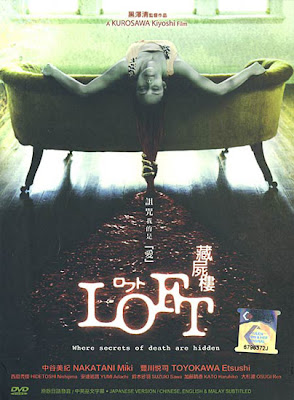 Unsurprisingly, this hasn't been rushed into a DVD release in the west, despite the director's cult reputation and the intriguing trailer. I found this on DVD in Malaysia (from PMP) which has very good English subtitles, but the picture has been savagely cropped from widescreen to full screen by simply lopping off both sides (a crude 'centre-cut' to adapt the widescreen image to old-style TVs). Not the best way to see a carefully visual film, but the only subtitled DVD I know of.

Loft is one of those films that I'll need to read more about before I stand a chance of appreciating it. In the meantime, I'd better take a break and try out one of Kurosawa's non-horror movies. Tokyo Sonata looks very promising...