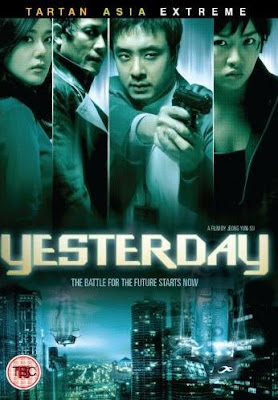 YESTERDAY
(2002, South Korea)
Korea seems very keen on action/sci-fi in the Blade Runner vein. Though this movie isn’t as ambitious or as futuristic as Natural City (2003), the airborne overhead advertising pods and incessant rain are pointers to their main visual inspiration.

Yesterday isn’t set too far in the future (2020), but the police are using robot insects to look around a hostage situation. When the storming of the siege goes sour, a detective called Seok can’t get over the tragic results, and he continues to search for a priest involved in the case.

This is a new re-unified Korea, but where the border used to be, a top secret experiment from the past now leads to a series of high-level assassinations. When the Police Chief is kidnapped, another hunt begins and Seok teams up with the Chief’s daughter to investigate, not realising how close to home the mission will get. 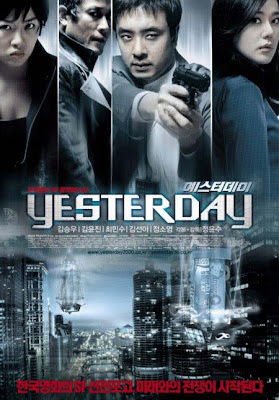 While the plot is twisty enough, and the setting has some futuristic embellishment, the story seems to take second place to a long series of furious high calibre gunfights. Beside the two leads, the secondary characters are reduced to little more than a collection of brightly coloured hair-styles, so we can tell who the good guys are. Seon-a Kim as May (pictured top left in the poster, top right on the DVD), is the only one who stands out from the back-up team, a kickass female special op who gets a lions share of the gunplay.

The Police Chief’s daughter is also a serial killer profiler, who is also handy with a gun. Played by Yun-jin Kim, she demonstrates a convincing command of English in one scene, and was soon afterwards snapped up as a regular character in Lost, where she plays a far meeker role. Kim had previously played a gun-toting action woman in Shiri (1999).

Yesterday is slickly made and fast-moving, though I was hoping for a few more inventive alternatives to armed response in the future of law enforcement. It’s now available in the UK on DVD from Tartan, and is also out in the US.