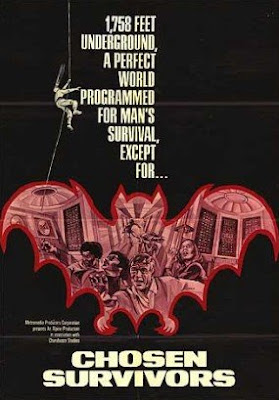 CHOSEN SURVIVORS
(USA, 1974)
All I knew about this was that it was post-apocalyptic and had vampire bats in it! As it was on the DVD double-bill release with The Earth Dies Screaming, which I simply had to have, I finally got a chance to see it. Earth is a black/white sixties British space invasion, Chosen Survivors is seventies US sci-fi with a TV look and a TV cast. But its adult approach and grim plot elevates it to filmic status. Both films have been hard to see until now.

Chosen Survivors starts with a dozen drugged civilians being dragged from a military helicopter into a cave in the middle of the desert. Down deep inside is a huge, futuristic, self-contained bunker. As the drugs wear off, they get shown a presentation video informing them that the world has just been obliterated in a nuclear war, and they were all pre-selected as experts most likely to help humanity re-populate.

They try to grasp the fact that everyone else in the world is dead (apart from those in other bunkers) and settle down to life together for a few years, until the radiation levels are tolerable again. But if life wasn't tough enough, they discover a problem with their underground sanctuary - killer vampire bats... 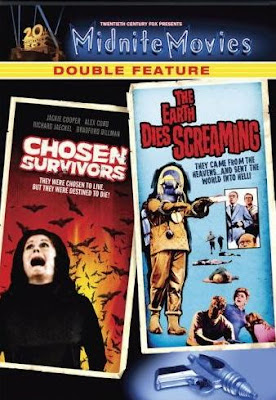 It’s not as corny as it sounds. Intelligent plotting, sexual and psychological drama and an offbeat directorial approach make this quite a unique little movie. Director Sutton Roley was obviously trying to break out of TV with this one, though he was a master of top TV shows for decades.

Skewed camera angles are effectively used to show the disorientation of the survivors as they arrive, wide-angle lenses to accent their claustrophobia. There’s also an impressive, experimental, electronic soundtrack by Fred Karlin, just after he scored another downbeat sci-fi, Westworld.

While the cast aren't A-list, there are a few familiar faces – like, Alex Cord (Archangel in Airwolf), Jackie Cooper (Perry White in Superman – The Movie), Barbara Babcock (Hill Street Blues) and Richard Jaeckal (Grizzly and The Green Slime). And once again, Lincoln Kilpatrick gets a tricky climbing assignment, like he did as one of the night-people in The Omega Man.

I’m very glad to have seen this. Now where's the CD release?