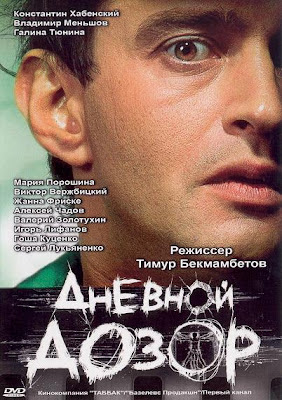 Cover art for the Russian DVD release with English subtitles

Reviewed from the English subtitled all-region Russian DVD (from allDVD)

After the dazzling originality of Night Watch (2004) succeeded in captivating Russian audiences and worldwide cult movie fans, the sequel delivers more of the same. But at least this time we’re more ready for it. Night Watch has done for Russian cinema what Ring did for Japan. But I've yet to see any other recent Russian film as nearly as accomplished.
Day Watch is another mind-boggling movie, based on the Night Watch novel (a fuller explanation, together with PLOT SPOILERS is here on Wikipedia). All your favourite characters are back, but it’s highly recommended that you watch Night Watch again before ploughing into this. There’s no exposition to remind you of the story-so-far.

There’s the same mix of mundane everyday Russian life alternating with epic other-worldly action. Vampires, black magic, ancient power. It provides a next-generation update on several genres all at once.
The special effects are used with imagination and vision on a very large-scale. Though sometimes, the direction tries a little too hard to impress.

Anton Gorodetsky (Konstantin Khabensky) is back, caught in the middle of the war between light and darkness. Vampirism hardly figures in the story – it’s a power struggle teetering on the edge of all-out war. Points are being scored with long intricate battles of mind influence, like a game of chess using people and history. This time, an ancient piece of chalk that can alter fate could sway the battle.

Action scenes, hinted at in the trailer, include the spectacular assault on a labyrinthine fortress on horses that can ride through brick walls, a sports car driving up and skidding around the outside of a huge hotel and, oh yes, the destruction of major Moscow landmarks…

The film expects viewers to pay close attention, open their minds and be blown away by this violent, darkly humorous, black magic epic.

The only English subtitled DVD available at the moment is from the alldvd online store. But as the film progressed, the timing of the subtitles on my copy got worse, sometimes lagging behind the speaker by several seconds. The picture was slightly soft, as was the audio. Home cinema perfectionists may want to wait for the inevitable US release, that will follow Day Watch’s appearance in US cinema’s in June. It’s certainly a film that will bear, and necessitate, repeat viewings!

24framespersecond (linked here) has just reported that Day Watch will also get a cinema release in the UK in October. 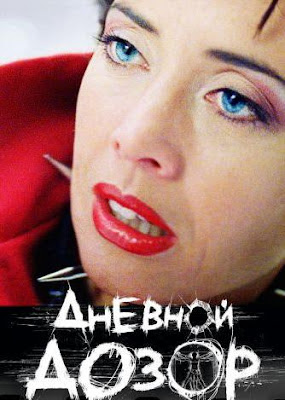 Don’t be put off by the simplistic DVD covers and posters – they seriously let down the layered, stylish look of these films. Instead, check out the trailers on the Day Watch fansite Into The Gloom...

How the third film, Dusk Watch, intends to build on these two films and conquer the US remains to be seen...

Email ThisBlogThis!Share to TwitterShare to FacebookShare to Pinterest
Labels: Russia