Just wanted to flag a few new anime series that have been made with a great deal of care, and buck the trend that they all have to feature cute monsters, samurai, school children or giant robots. I've already mentioned Mushishi, which is my current favourite, but here's a few runners-up. 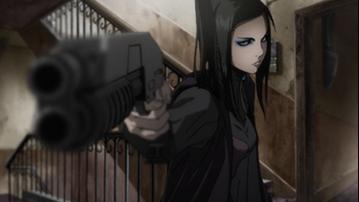 ERGO PROXY
This started really well with a crazed demon-thing loose in a futuristic city. It is being tracked by a decidedly goth-looking detective (I think she looks a lot like the lead singer from Curve, Toni Halliday). But then the action calms down to follow rebel life outside the sealed city, which is considerably duller.

Part of the premise seems to involve supposedly emotionless androids contracting a virus and somehow 'getting religion'. A phenomenon that could cause chaos in all that's left of human society. Is there a connection with the super-fast being murdering everything in its way?

Awesome opening episodes though, great art, even arty and some fierce action. It stuck me that this shares a similar premise to Ghost in the Shell, but it couldn't be more different.

A little girl cyborg called Pino (wearing bunny rabbit fancy dress) is becoming a fascinating character. I'll stick with it and hope Lil, the detective goth gets back into the action.
I'm definitely sticking with it though, episode 11 was a total trip! 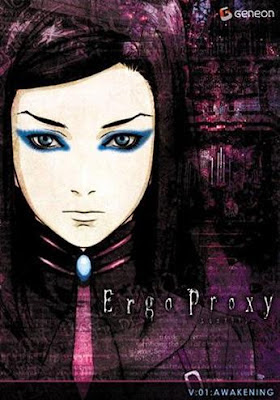 July 7 Update:
Twitch film reports that Ergo Proxy will get released on Region 1 DVD at the end of the year... full report linked here.
Posted by Mark Hodgson at 11:01 pm