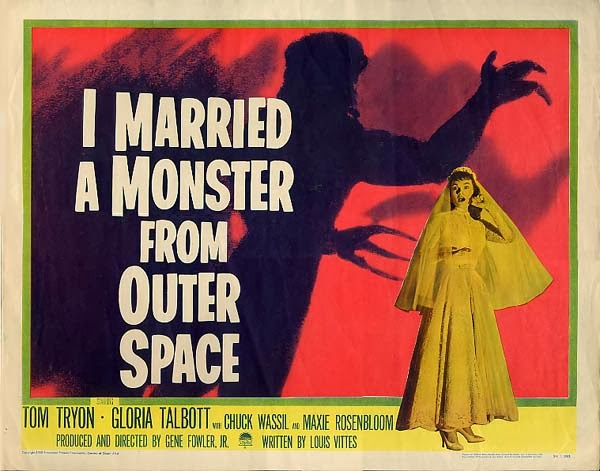 There are some great movies with lousy titles. 'I Married A Monster From Outer Space' would be better as a tabloid headline or the title of a musical comedy. Looking past the screaming poster and the title, which deserves at least two exclamation marks, there's a sinister sci-fi horror lurking beyond. Not much of a budget, but moody black and white cinematography that money can't buy and a script brimming with sexual tension and subtext. 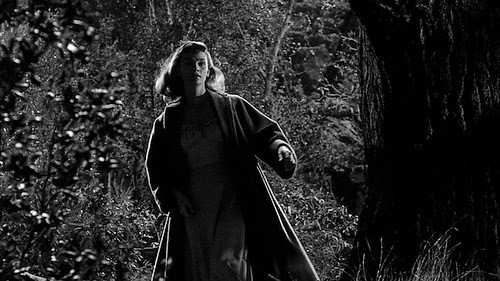 The decade of the 1950s, when you couldn't talk directly about sex or show it. But that's the core of this story. A newlywed couple has had the groom swapped out on his wedding night, replaced with an alien from outer space. The question looms in every scene - will she have sex with an alien? And what does he want? But they can't talk about it explicitly...

There are many 'aliens that look like humans' stories, the best being Invaders From Mars, Invasion of the Body Snatchers and the TV series The Invaders - all obsessed with finding the details in appearance and behaviour that allow us to tell friend from foe. 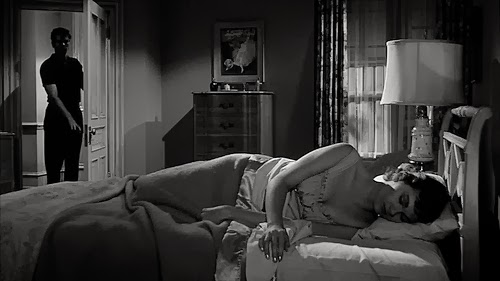 Here the paranoia has reached the bedroom, which makes for an enduring theme - who are you sleeping with? Beneath the sci-fi story are layers of sexual angst and hints of impotence and frigidity.

It's also enjoyable as sci-fi, played deadly serious by all involved. Creepy too, but the delicate way we learn about what goes on between these two newlyweds still has dramatic punch without showing everything. There's also a strong element of Rosemary's Baby (written nine years later) as the new bride turns to friends for help, only to find that they've been taken over as well... 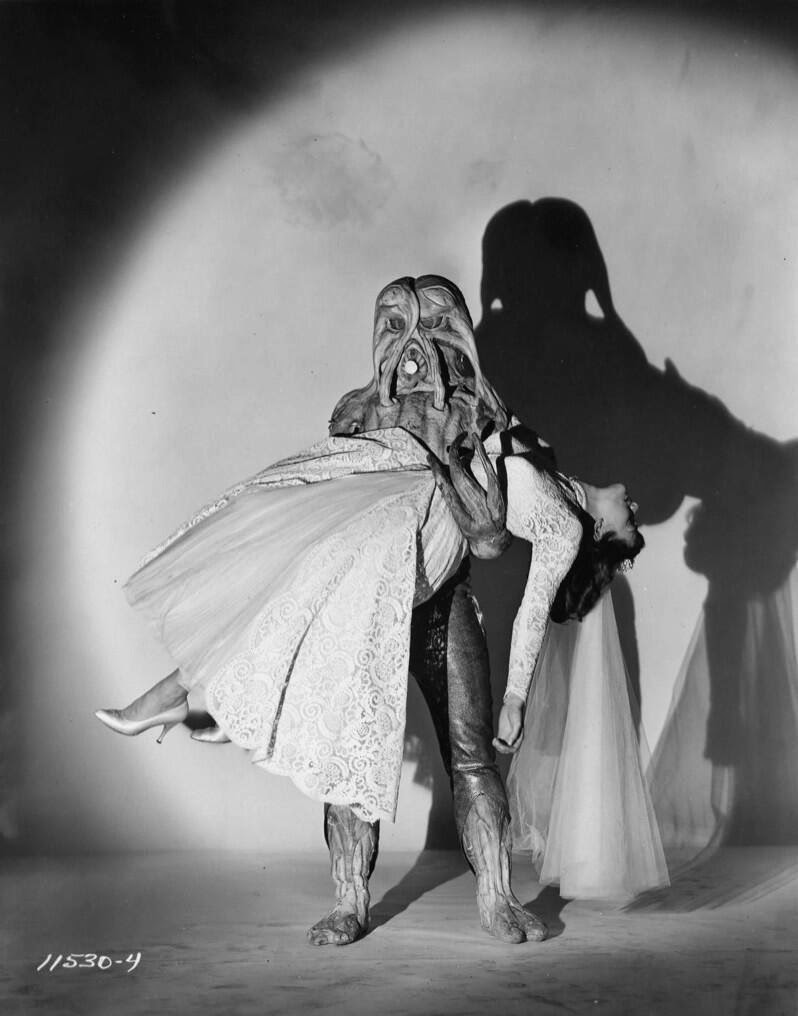 The extraordinary alien make-up was sculpted by Charles Gemora, who also built (and performed) the alien E.T. in The War of the Worlds (1953).

After many rewatches over the years, This keeps on giving - the dramatic and visual shocks still work. This time round I recognised a young Ty Hardin (as one of Tom Tryon's beefcake swimming buddies). Probably missed him because he's credited here as Ty Hungerford. He later played the boyfriend of, gulp, Joan Crawford in Berserk (1967). Hardin was also the FIRST choice to play 1966 Batman - only because he was unavailable did Adam West get the part.

As the groom, Tom Tryon is very good at doing very little - a spaced out, distant look, similar to Keir Dullea after his brain was fried by the trip through the star gate. 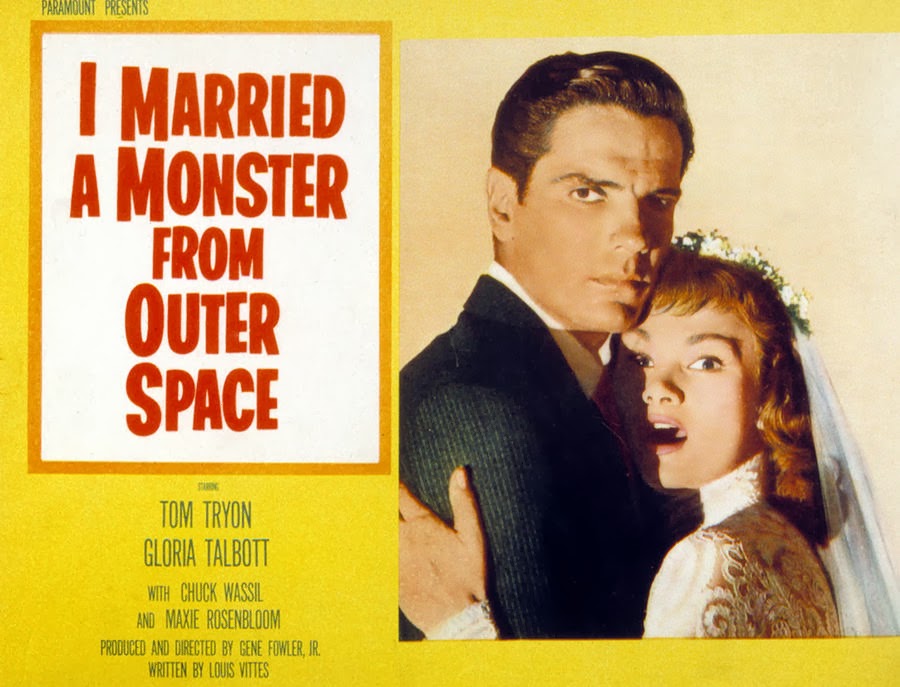 The bride, Gloria Talbott, made a handful of low budget horrors (The Cyclops, Daughter of Dr Jekyll, The Leech Woman), but this is easily the best. Her performance anchors the entire story, undermined by being imprisoned in too-tight teenage angora sweaters, her chest lit as carefully as her face. Though this emphasises the limits of how sexuality could be portrayed at the time.

Director Gene Fowler Jr worked on as much TV as film, and mainly as an editor (one of his last credits was Skatetown U.S.A.!). His experience is evident in some seamless scene transitions, and a clever, subtle use of back projection and reflections. 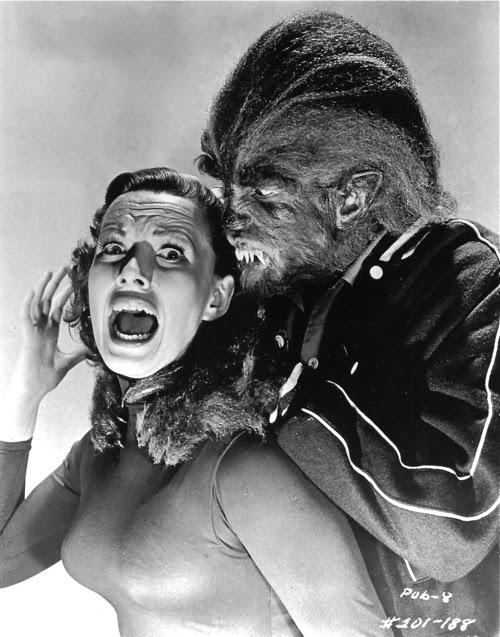 Besides the other 'they look just like us' stories, this would make a great double-bill with I Was A Teenage Werewolf (1957). The same director saddled with another silly title, but again a serious horror film with sexuality barely contained beneath the surface. This time the agonies of adolescence with a teenager who can't hide his raging lust (above). The DVD is presented anamorphic widescreen, though it looks a little tight top and bottom. This isn't too distracting, but the lack of clean-up of film scratches in a movie that takes place mostly at night certainly is.

More posters on Wrong Side of the Art...