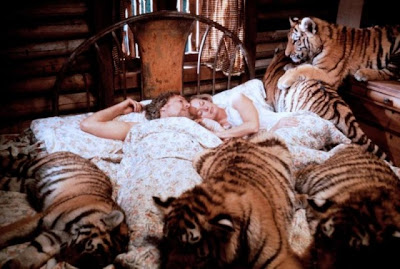 Animals attack - the making of ROAR...

I was half-interested in The Life of Pi, once again drawn in by the promise of 'a true story' of a man trapped with a wild animal in a rowboat at sea, with Ang Lee directing. But the trailer put me completely off it, because of the overuse of a CGI tiger, completely sapping the elements of danger and wonder.

Obviously there are many sharp and pointy reasons why actors and even stunt performers won't interact with tigers. But a large part of the spectacle, for me, is seeing wild animals. Real ones.

The illusions of actors and wild animals in the same scene has been achieved with every special effect in the book. Split screen (Bringing Up Baby), full body animal suits (Gorillas In The Mist) animatronic replicas (Jaws), the animal's trainer doubling for an actor (Live and Let Die)... all usually in quick cuts. The lure of long and complex camera moves achievable with CGI leaves us staring at a fake shot for far too long. I'm not interested in how amazing the CGI replica is, I want to see how amazing a tiger is.

My apathy towards fakey CGI has been coincidentally countered by my enthusiasm for a 1981 film that took far too many risks. No faking in these scenes, only that these animals aren't wild, so much as mildly tolerant of humans, sometimes. I'm not saying that we should throw actors to the lions, (tempting though) but it's far more entertaining.

It's risky for an actor to be confined with huge predators in small spaces. But Roar is precisely that from start to finish. With the entire cast not doubled by stuntpeople, and not just one wild animal, but over a hundred... 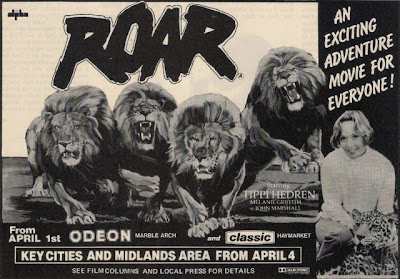 A lion conservationist in Africa, fighting for funding, has to leave his lodge to capture two escaped animals before the local poachers kill them. But while he's away, he misses the arrival of his family, visiting for the first time. His wife, two sons and teenage daughter are unaware that he shares his home with a hundred lions and tigers...

The story is slack, with several long set-ups and few payoffs. But I started enjoying it as a series of spectacular set-pieces with a family of mad people who actually lived with lions. Roar barely works as a narrative and many of the performers aren't very experienced actors, but it's no more staged than the True Life Adventures that Disney used to sell as 'documentaries'.

The action is literally jaw-dropping. Only slightly less foolish than shooting Jaws with real sharks. An early scene has a delegation of potential investors arriving at the lodge. The lions and tigers get riled up and one jumps in a small boat with two guys in it and the whole thing sinks in seconds. Shot for real.

The scenes of people surrounded by big cats makes the lion tamer of the circus shows look really, er, tame. We get more lions, more people and no cages. 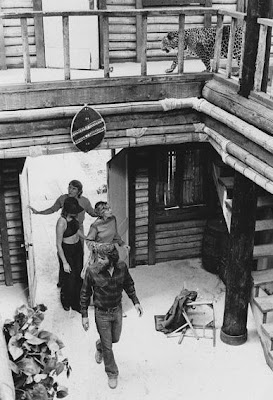 My favourite scene is when the family arrive and don't notice the lions sleeping around the grounds. Inside, they spot a leopard in the house and panic, their screams attracting dozens of lions who immediately charge inside as well. The following chaos as everyone tries to avoid a houseful of lions is brilliantly and dynamically shot, tightly edited into a unique and extended nightmare chase. Rooms full of lions, a whole pride charging upstairs together, tigers jumping in through windows... quite astonishing. 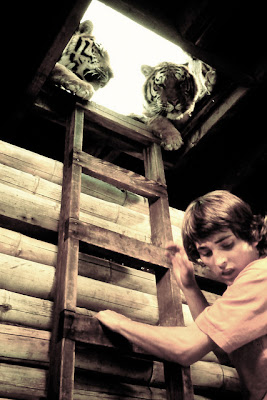 Exciting, amazing, cute... but the amount of accidents and injuries sustained by the cast and crew makes this an extended 2.35 widescreen YouTube 'look at that!' clip, or a lost episode of Jackass.

I missed Roar in the cinema, only recently seeking it out after seeing Tippi Hedren, the star of Alfred Hitchcock's The Birds and Marnie (and subject of this year's The Girl), in conversation. She talked about her charity project, a preserve for unwanted big cats. From the name, Shambala, and even after watching Roar, I assumed that the preserve was somewhere in Africa. Not at all, it is in fact just outside the city limits, just north of Los Angeles. If I'd read the book before our recent holiday, we'd have dropped in for a tour. 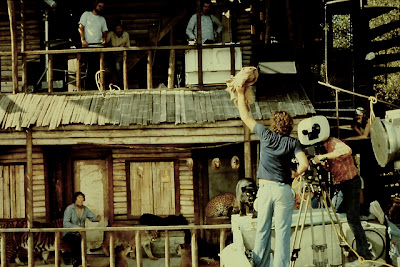 Impressed by the film and curious about the IMDB comments about injuries, I bought Tippi's 1985 book The Cats of Shambala, which is all about the fascinating eleven-year project to make Roar. A story which would make a far greater 'film about the making of a film' than Hitchcock.

In the late 60s, while on location in Africa, Tippi and her then husband Noel Marshall, a movie producer, saw an abandoned game warden's lodge that had been taken over by a pride of lions. The image inspired the two of them to make a film. Noel, who was working as an executive producer on The Exorcist tried to put a deal together while Tippi started collecting lions!

Through the early 1970s, she welcomed unwanted lions and tigers into their Beverley Hills home, mostly unwanted pets and cubs from zoos that couldn't afford to expand. Living with the animals, the family were aiming to become so familiar with them that they wouldn't be attacked when it came to filming.

After a few accidents, like when lions escape and roam the local residential streets, the family and their 'pets', moved to a large enclosure in Soledad Canyon, not far from where 60s TV series Daktari was filmed (now available from Warner Archives). The idea was to landscape the barren land, planting it with trees to look more like Africa, and building a purpose-built lodge for all the lion action scenes. With the extra acres of land, Tippi and Noel could also take in dozens more rescue animals, including a giant circus elephant. The new animals were written into the script, as were any unusual habits of the lions.

Having accumulated 132 lions, tigers, leopards, cougars and jaguars, filming began in 1976. By this time, Tippi's daughter Melanie Griffith was also getting high-profile credits, helping the publicity of this multi-million dollar production, made outside of the studio system.

But the shoot was plagued by disasters: including the compound being damaged by a brush fire, and a flood that washed away cages, hundreds of trees and part of their set. A few escaping animals (we're talking huge male lions) were tragically shot down by panicking police officers. 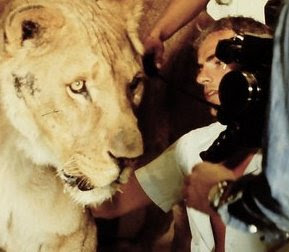 Several entire camera crews walked out when members of the cast were injured on set, including Tippi breaking a leg, Noel and Melanie receiving nasty bites. Several closer calls and the near scalping of their cameraman made them think the production was cursed. Or maybe they'd bitten off more than they could chew (sorry). The weeks Tippi spent filming the gruelling attack scenes in The Birds were a walk in the park compared to her injuries and heartbreaks making Roar.

The cameraman whose scalp had to be stitched back on was Jan De Bont, shooting his first American picture. He survives to go on to work on Cujo (1983), Die Hard (1988) and Basic Instinct (1992), before his brief run as a director that started with Speed (1994) and Twister (1996). Even after that mauling, he completed shooting the picture over the next few years. Respect! It's his coverage that makes the footage so exciting. Tight camera moves shot from close to the action. Too close! 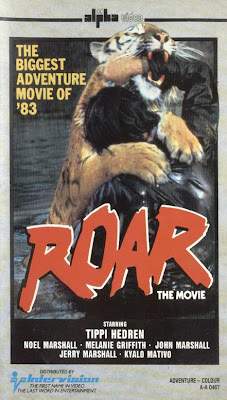 Disasters, injuries and problems with financial backers delayed the film's completion until 1981, by which time 'animal attack' movies were old hat and studios weren't interested in what they saw as an animal-oriented family film. (Times have certainly changed to where we're lucky to get anything but). As a result Roar didn't get released in US cinemas, only in a few countries including the UK, Japan, Germany, Italy and Australia... It was then lost in the huge glut of variable quality VHS and home video releases. I have to say, the poster art I've seen didn't do them any favours either. 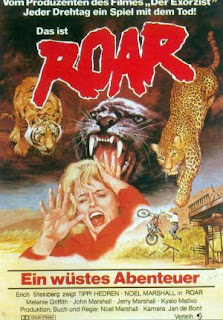 Roar wasn't a box office success, and Tippi and Noel's marriage broke up after a decade of stress. Impressively, Tippi stuck with the Shambala reserve and continues to round up and take care of unwanted big cats as a registered charity. The main 'set' and shooting location of Roar is still out there and running tours, thirty years later. 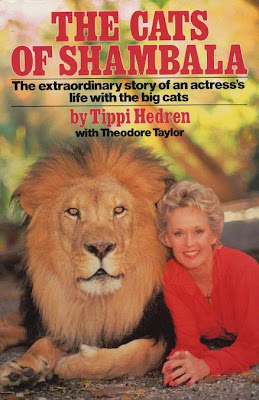 The book, 'The Cats of Shambala' could easily be retitled 'The Making of Roar -the Movie' as it details the project from start to finish, with many photographs of the key players, human and animal. It's an easy but engrossing read, Tippi's love for the animals is clear, as are her keen observations of their behaviour. Lots of hot tips about how not to get attacked by lions. Out of print, secondhand copies are easily available through online stores and eBay.

The movie is still independently owned and proceeds from Roar DVDs continue to help fund the Shambala preserve. The website is here.

More behind-the-scenes photos are in this Flickr account, including shots of the fire, the flood and some of the scars!

If you're near Los Angeles, here are details about visits and tours around Shambala.