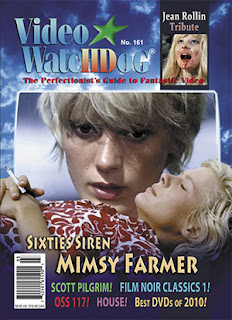 Perhaps I'm too used to variable acting in horror films, because once in a while a presence or performance leaps out and reminds me what quality looks like.

Seeing Mimsy Farmer in Dario Argento's Four Flies On Grey Velvet, I think it was at a screening in the Scala, King's Cross, that she first really impressed me. While a serious and versatile actress, she was stuck in a Euro-horror rut in the 1970s, with the emphasis on rut. Her characters were repeatedly ravaged, brutally or otherwise, and she also became known as an actress who was 'okay' with nude scenes. This was a consequence of some 'hippy chick' roles she'd done where she was genuinely comfortable being nude in front of the camera. 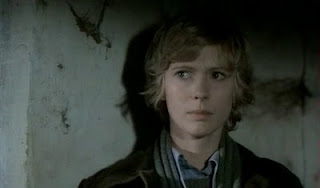 I only know this because Video Watchdog magazine did what they do best and tracked her down for a recent interview (cover art at top). It was fantastic to see her again (see the last photo below) and willing to talk about her movie work - good and bad. The lengthy career interview also pointed out several films that I hadn't tried, one in particular that she thought was her best. She's absolutely right. It's very good indeed...

To me Mimsy's characters are at their most interesting in a fix, cornered. The fragile wispy blonde then gains a steely quality. When stressed, she doesn't panic, and the tension in her face, and her anger, is all very real. It's not the same quality as Meiko Kaji burning with revenge, but someone psyching themselves up for danger and refusing to crumble. Her fair hair would normally mark her as the first victim in a horror film. But her trademark short hairstyle suggests that she's not like those other women. She's the least 'blonde' blonde in horror. That's why I like her.

So, after a trawl through my archives, I had a bigger pile of Mimsy than I thought. I watched everything of hers that I had... 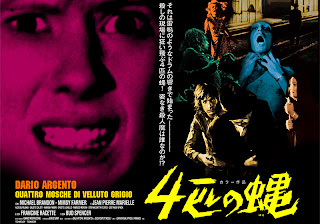 Luckily. this was how I first saw Mimsy, playing the victimised hero's girlfriend. She gets caught up in the chaos as he's blackmailed for murder then cruelly victimised while trying to unveil his tormentor.

This isn't as tightly plotted as Dario Argento's first two thrillers - it looks like he was more interested in the intricate camerawork of the stalking scenes than the complexity of the story. Like Cat O' Nine Tails, it's a whodunit with a bucket of red herrings and too few clues. But for fans of early Argento, this is a must-see, despite spending an age as the most unavailable of his thrillers.


Unusually for Argento, the killer isn't unseen but wears an extremely creepy rubber mask. There's still plenty of hypnotic, bravura camerawork from the point-of-view of the murderer. As in the rest of the 'animal trilogy', the murders have an intricate build-up, but not as vicious as his horror films that followed. Despite the serial killings, there's also too much comedy relief, with eccentric characters and even a shitty little car before the one in Deep Red.

Besides Mimsy, it stars Michael Brandon (Dempsey and Makepeace) and Bud Spencer (star of many spaghetti westerns and Terence Hill buddy movies). 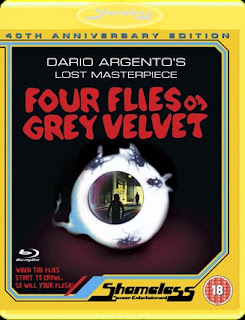 This Argento film only officially appeared on DVD in the US in 2009, and not in the greatest of condition (from a scratched, splicey print). I'm hoping for a much better presentation on Blu-ray, due out in the UK in January 2012 from Shameless Screen Entertainment. 
Mimsy reckons this is the best film she's been in, though it's not a big showcase role for her. She's excellent in it, central to it, but not the star. It's an ensemble piece with a uniformly good cast. Although 1970s French films aren't my specialty, I still recognised Michael Lonsdale (before he was the Bond-baddie in Moonraker) and Jean-Pierre Marielle who coincidentally played the gay detective in Four Flies On Grey Velvet. Here, Mimsy speaks French fluently, though her character is English. 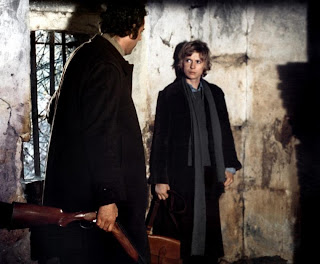 She's a teacher getting away from it all in a French country cottage, who attracts the unwanted attentions of a group of amateur boar hunters. While this is tough to watch, it's not exploitative like some of her earlier 'victim' roles. This might be a derivation of Straw Dogs, but not so much about the victim or her revenge. However it starts off with the familiar 'duel of the cars' that greets her arrival in the country, just like in Death Weekend and The Shuttered Room. It's also a little like The Most Dangerous Game, but set in a very recognisable world. 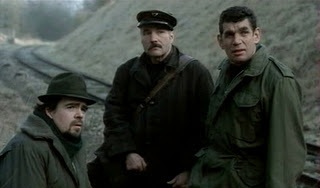 The all-male hunting party is made up of every strata of society. Each of them is faced with the decision, should they go to the police... 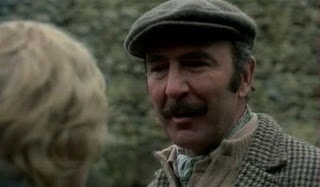 This is made even more real by the wilderness location and the absence of background music. The cinematography from Claude Renoir (French Connection II, Barbarella) is beautifully judged, in fact, the whole production is. I've not seen such a well-made, slow-burning thriller in a long time. Made in 1975, it still feels quite modern. 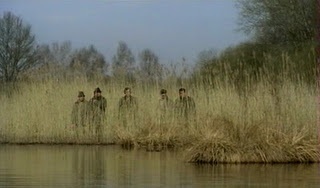 I'd never heard of The Track before the Video Watchdog interview. It's not even on DVD in France. While not the same brand of survival horror that we get now, for anyone wanting something intelligent along the lines of Deliverance, this should really be more available. 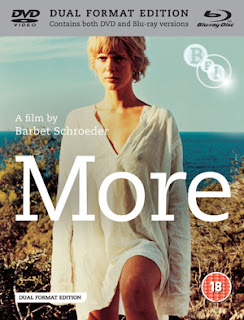 I'll add this as an example of Mimsy's interesting non-horror work, though this is certainly in cult territory. After her initial time in mainstream movies, she was in a string of biker-rebel flicks before this acid-influenced arthouse drama. What begins as a trendy freewheeling romantic drama slowly and subtly moves into darker territory, constantly distracted by many trippy interludes.

Again Mimsy is perfect as the object of affection for an offbeat hipster, with more to her than meets the eye. She seems completely unfazed by her nude scenes, as befits her character. But I'm guessing this role set a precedent for some less scrupulous directors of her subsequent horror films.

With occasional backing music by none other than Pink Floyd, this is an interesting mystery tour, with much modern resonance (the island of Ibiza has since gained a much druggier reputation for huge dance parties since acid 'rave' culture). The slow, observational pace dates it, but the story could easily be happening right now. Oblique direction and sharp cinematography make it an unusual change from the sensationalism of drug-exploitation movies of the time. I also can't imagine that everything that's on show (sex, drugs, flesh) made it all into cinemas for its original release.

It's an international production, but all performed in English language. More is on DVD and Blu-ray in the UK. 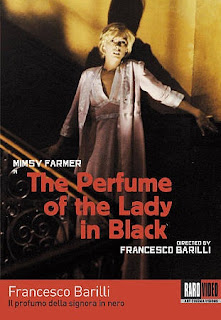 THE PERFUME OF THE LADY IN BLACK
(1974, Italy, Il profumo della signora in nero)

Mimsy is again the star, as a young woman coming to terms with her past (who isn't?). It plays a double game between whether she's insane or being driven mad. The ghosts that haunt her seem awfully real. And her friends are talking of voodoo rituals. Hmm.

Really well shot, with an evocative soundtrack, the story meanders for far too long, before a completely crazy ending that I didn't fully understand. But the climax is what puts this on the map and means I'll have to watch it again. Another point of interest was seeing Nike Arrighi again, after her standout role as the 'sensitive' in Hammer's The Devil Rides Out (1968).
Mimsy is ideal for the story, but the pacing let's it all. This has recently been released on DVD in the US (see cover art above). 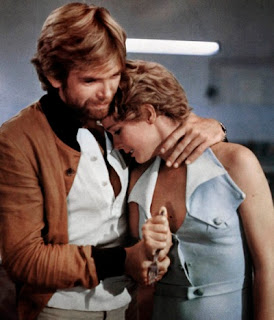 Autopsy pairs Mimsy up with Ray Lovelock (the star of The Living Dead At The Manchester Morgue) and once again she's used and abused. Besides being surrounded by murders and dead bodies, (she works in a pathology lab), there's yet more lingering nude scenes, stranger sex scenes than usual, hints of necrophilia, and some nasty photos of corpses that I suspect are real. All this sensationalism would normally make an Italian horror a must-see, yet it's sabotaged by the dull pace of each scene, from the director of the even duller The Dead Are Alive. While it starts off posing as an apocalypse movie, it finally falls back into a far more predictable storyline.


The boredom and the queasy mix of large-breasted corpses, disfigurement and sex are presumably aimed at the Ed Geins and Dennis Nilsons in the audience. Despite once being called The Magician, it's currently available on DVD as Autopsy. 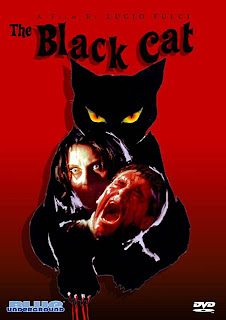 In every Lucio Fulci film there's usually one scene that spoils it. Like upright burning dummies that are supposed to be zombies, or clockwork flesh-eating spiders in the library. But The Black Cat is chock full o' silly scenes, Fulci using the frankly silly Argento subplot where a character can control the actions of an animal in order to commit murders. Here we get a killer cat. Not a lion. A small black cat. There are some increasingly far-fetched cat murders which desperately needed to be better staged, like the animal attacks in The Omen films, where you might believe a raven can kill.

Rubber bats on strings aren't scary. You should also not point cameras at them for too long. I'd not even previously registered that Mimsy was in this. Fighting off rubber bats isn't going to win her any new fans.

This is so silly, it loops it's own loopiness and becomes very watchable, helped by one of the best casts Fulci ever had, full of Euro-horror regulars. Besides Mimsy, there's Al Cliver (Zombie Flesh Eaters), Patrick Magee (Tales From The Crypt, A Clockwork Orange) taking it all very seriously, and David Warbeck (The Beyond) not taking it at all seriously - he acts and sounds like Roger Moore! But with daft dialogue and a plot like this, who could blame him? The English country locations and Pino Donaggio score also ease the pain.

Paradoxically, this one is widely available on DVD.

So. Autopsy is for gorehounds, The Perfume of the Lady In Black is arty Italian horror, The Black Cat is for Luci
o Fulci completists, Four Flies On Grey Velvet is an early classic Dario Argento, More is arthouse with a plot. But if you want to see Mimsy at her best, track down La Traque.


Her filmography is rich with relatively unknown cult flicks. I'm particularly keen to see her four late 1960s biker/teen rebel movies. What other Mimsy's do you think I shouldn't miss?