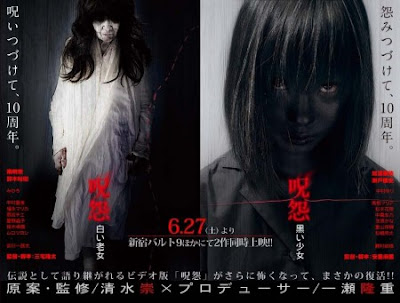 
Two new films for the tenth anniversary of the Grudge saga...

For me, Takashi Shimizu's Japanese Grudge movies provided more scares than the Ring movies. Even the first two shot-on-video films, commonly referred to as Ju-on: the Curse 1 and 2, were creepy as hell. Together with the US remakes, the various different incarnations of The Grudge are easily confused - I laid it all out here.
The story began as a mystery centred on a suburban house. Everyone who visited the house was scared to death - if they left the house before they died, their own homes would become similarly cursed. As the story leapt forwards and backwards in time, following different visitors and their families, a picture emerged of the original events that sparked off the curse, as well as tracking how far it had spread.

Last year, to mark the tenth anniversary of the 'series', two more Ju-on films appeared, produced the same way as the first two, by shooting cheaply on location and on video. With two different directors, the video-look distances these from Shimizu's current movie series. He's still promising a third Grudge movie for Japan, not to be confused with the American The Grudge 3, which wasn't directed by Shimizu. Not confusing at all. 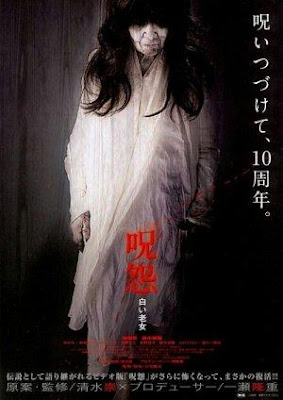 Ju-on: White Ghost and Black Ghost unfold like the classic Ju-ons, with the narratives shifting back and forth in time, changing with each cut-to-black chapter break. But these new stories aren't closely linked to the old ones. There's a completely new house and I was disappointed that (almost) none of the regular characters appear to link it all back to the original 'grudge'.

In White Ghost, the jumpy scares kick in quickly after a shaky (camerawork) start. But it tries too hard and too often to make us jump, resulting in a series of hit and miss scares. The new 'face' of the grudge verges on the humorous because she keeps popping up repeatedly... and carrying a basketball. Basketballs have never been scary, still aren't. 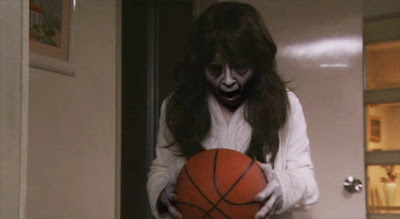 Other distractions include the Christmas setting which has zero bearing on the story. It doesn't help that the characters put candles on their Christmas cake and blow them out as if making a birthday wish. Why? Now I'm used to characters in horror movies acting illogically, but several of the characters' motivations are quite puzzling. It's especially hard to believe any couple would start French-kissing just after one of them has puked!

Thematically, the method of the Ju-on curse also seems to have shifted, from ghosts killing people, to people killing people, with some unwelcome hints of incestuous paedophilia thrown in. 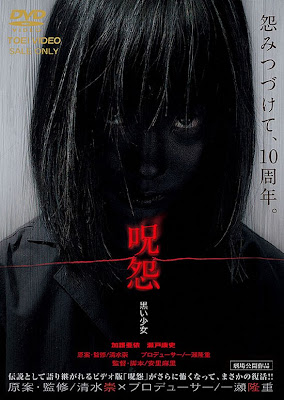 Black Ghost is a continuation, but is less intricately cross-connected with White Ghost the way all the previous films intertwined their characters' lives... and deaths. This is scarier, better shot and better paced, but also strays further from the Ju-on mythos into Tomie territory, with the problems of corpse disposal, a mysterious foetal cyst, and even the classic Tomie signature image - the head in the bag! 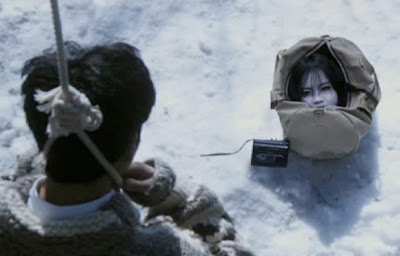 This new pair isn't essential to the series and indeed lacks many of the core ingredients. I really miss the link back to the original house - and having Kayako lurking in the attic... But it's an interesting experiment, recalling the look, and viciousness, of the earliest chapters of the saga, (as well as some of the J-horrors that first followed Ring, back when shooting on video was far more common and obvious).

But the lack of quality of performance, creepy pace and intricate structure makes it regrettable that Shimizu isn't writing and directing. So I'll continue to look forward to his third Japanese Grudge movie. 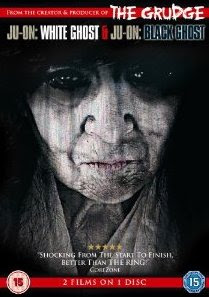 Although released separately in Japan, these are wisely being sold as a double-bill on DVD in the UK, as both films last barely an hour.