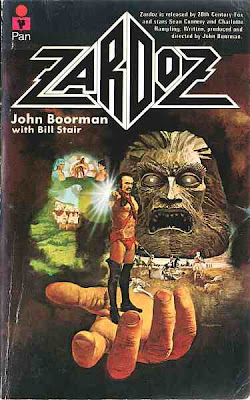 This might have been better if they'd tried for serious sci-fi, instead of opting for a preachy parable, free of logic or science. It's certainly entertaining, but often unintentionally amusing. The overload of pretentiousness is offset by Sean Connery trying to keep it believable. This also shows just how much he wanted give up the role of James Bond, turning down Live and Let Die with its offer of $5.5 million dollars, compared to the $200,000 he got for Zardoz.

At times, it's like watching the death of the British film industry. I would have loved to see the faces of the 20th Century Fox marketing team as they watched, (how the hell are we going to sell this?). Indeed, that would be high on my list of things to do with a time machine.

Halfway through watching Zardoz in widescreen for the first time, I thought it was about to end, a buried memory of where I'd given up watching it so many times before. I was too young to see this in the cinema, but remember many impressive publicity photos during the release, and reading the novel (based on the script). I recently heard that director John Boorman (Deliverance, Point Blank, Excalibur) considered that after filming it, Zardoz would perhaps have been better as a book. Certainly the novel didn't have the daft acting or unforgivable fashion statements.

As Zardoz crept onto late night TV in the 80s, I remember watching it with flatmates, struggling to take it all seriously and attempting to understand what the hell the director was thinking. Now, I think it's fun to unravel as a philosophical puzzle on your own, or to enjoy it as a comedy with a blitzed gang of friends. A film that could happily co-exist with the world of The Mighty Boosh. 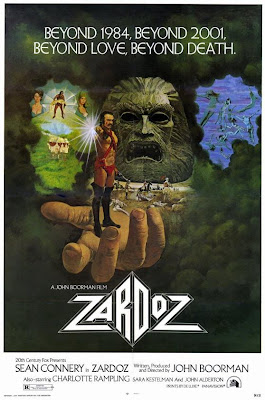 A huge stone head floats over desolate grasslands, landing to receive sacks of grain from armed horsemen, spewing out a reward of guns and ammo from its open mouth. They savages worship Zardoz, literally a god-head. When it flies back home, one of the raiders is hiding inside. Zed (Sean Connery) is an Exterminator, the first 'Brutal' to enter 'the Vortex'.

There the inhabitants are civilised, seemingly from a higher evolutionary stage than the Brutals. While they're fascinated with him and enjoy reading his mind to see what life is like outside their city, Zed is curious to know why exactly his world is divided from theirs. 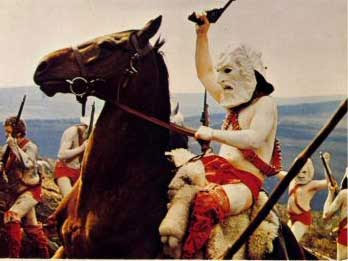 I really enjoy the vision of a post-apocalyptic world, with the Exterminators roaming the Outlands. These gritty scenes, with Earth's survivors riding around on horseback, is more realistic than the many car-driven post-nuclear movies that Mad Max sparked off. Covered in war-woad and wearing two-faced Zardoz masks, the brutals look suitably threatening, despite their bright red diapers and gunbelts. Added to this, thigh-length boots and a pigtail make Connery look less like Bond than he could ever have hoped.

The floating head has a fearsome, booming voice reminiscent of The Wiz (made four years later). The floating effect is elegantly and smoothly filmed. 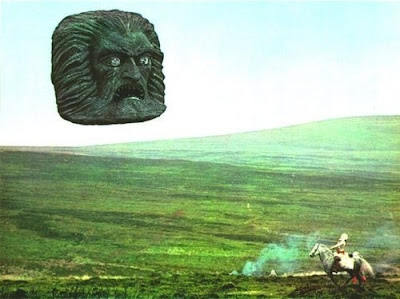 But once the narrative enters the Vortex, the blunt allegories begin being hammered home. Zed is in the stronghold of the ruling class, who control the workers with violence and a fake religion, while they concentrate on preserving science, art, history and themselves. The story dissipates into a dissection of what is wrong with the ruling class. I was reminded of the 'film' that the circus master shows the townspeople in The 7 Faces of Dr Lao - not a historical story, but a reflection of their own lives.

Zardoz still serves as a warning about our modern society, rather than an attempt at predictive science-fiction, which it resembles at first glance. Many interesting sci-fi concepts are thrown out like random ideas, rather than explored and integrated into the story. It makes me wish that directors new to the genre of sci-fi (and horror) be required to take an exam first. The director even attempted to alter audience's expectations by "tacking on" (Boorman's own words) a prologue that flags Zardoz as an entertainment, an artifice, because the audiences "weren't getting it". 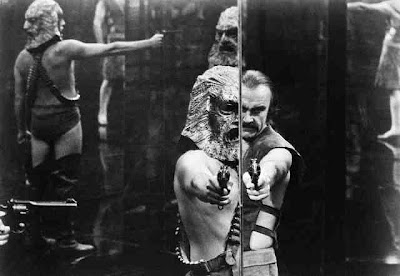 Having said that, the sci-fi elements, like the Immortals and their hardware, are impressively presented. The Eternals can talk to an interactive databank via a crystal ring, which can project associated images (a well-mounted and convincing stage effect), eradicating the need for TVs and computer screens in all but the largest meeting places. The Eternals can also use psychic violence to impose their will, easily outmatching Zed's pistol (though this ability is forgotten later on).

Indeed, I even saw a parallel with the Cylons of the new Battlestar Galactica, as the Eternals show Zed the 'Eternal Tabernacle', a greenhouse for regenerating Immortals who are killed, or commit suicide out of boredom. The image of Zardoz's stone head also reminded me of a Viper pilot helmet.

For all it's ideals, Zardoz looks more like Logan's Run, certainly in terms of bad fashion, which also relied on brightly coloured, uniform designs. Unflattering scraps of cotton for the women and macrame waistcoats for the men. This was also a regular style of cursed fashion in TV's Space 1999, also made shortly after Zardoz. The idea of sun-shy, gangly British actors suddenly being asked to wear tight-fitting, chest-baring outfits convinced no-one at the time, especially with futuristic silver, permed wigs for both sexes. Actually, the first season Space 1999 episode Mission of the Darians echoed many of Zardoz's plot points (like a functionally split society) with a far tighter narrative, loaded with atmosphere (and Joan Collins).

The acting ranges from intensely convincing (especially Charlotte Rampling and Sara Kestelman), down to (possibly intentional) pantomime. The embarrassing prologue cues the audience that not even the director is taking this all seriously, so why should we? Even Sean Connery is made to look silly as he tip-toes around a maze of mirrors, waiting for something to happen. John Alderton is good but miscast, unable to draw on his extensive comedic talents. Niall Buggy is not quite convincing as the trickster Arthur Frayn, though I'd like to check out his later appearance in an episode of Father Ted.

I watched a good transfer on the 2003 region 2 UK DVD, my first chance to see the film in 2.35 widescreen. Besides some radio ads, narrated by Rod Serling, it also has a fairly self-effacing, recent commentary track by the director. While I'm tired by film-makers complaining 'we didn't have CGI back then', at least Boorman is pleased with what he achieved on a relatively low-budget, talking about how most of the convincing visual effects were done 'in camera'. The floating head and the crystal ring projections look very good, as does the 'touch teach' sequence, where the sum of human knowledge can be gained by osmosis, realised with multiple front projections.

Boorman wisely comments that some (but not enough) scenes look silly or too long, and appears to recognise the fairly bad reputation of the film. I'd liked to have heard more about where his more bonkers ideas came from. 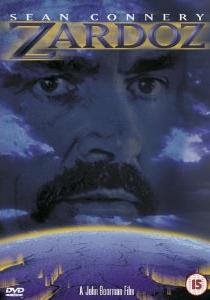 The current DVD cover art is lousy though, not nearly as compelling as the original poster, missing out both the stone head and Charlotte Rampling. Even Sean Connery's face is hard to recognise.

Taking it all less seriously, the funniest review I've seen of Zardoz is here, on Movie Mistreatments...

An original trailer for Zardoz is here on YouTube - "Kill the tabernacle!"... 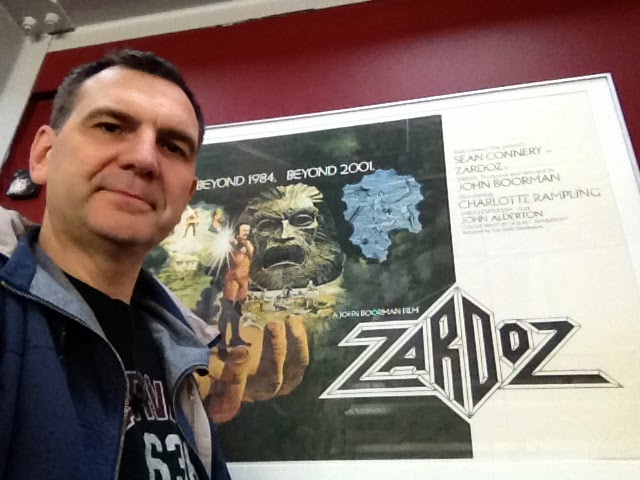 The BFI were brave enough to include Zardoz in a recent John Boorman retrospective. Here's me with an original poster. Zardoz speaks to me!