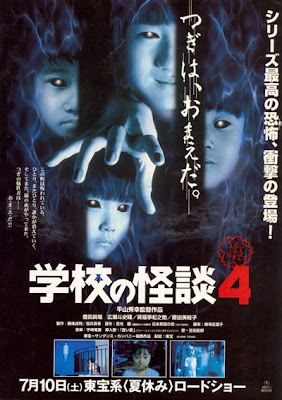 After seeing Ring (1998) for the first time, I was soon scrabbling around for more non-English horror movies, led only by their titles and cover art. I started into the Japanese Haunted School movie series at the last film but, as it happens, the best of the bunch. These films are nothing to do with the 2007 Hong Kong horror Haunted School, produced by Andrew Lau, that was aimed at older teenagers.

Haunted School 4 is very different from the first three, with a far less patronising attitude and no goofy, infantile humour. Despite a cast made up mostly of children, the acting is solid and realistic, especially the little girl in the middle of it all. What's OK to scare Japanese children is still fairly strong for most adults, some of the shocks match Ring and even Korea's The Host. Surprisingly, the director, Hideyuki Hirayama, also made Haunted Schools 1 and 2.

There are so few similarities with the rest of the series that it's not really a sequel. No recurring characters, alive or dead. The story centres around a school, but that's about it. Here that's not even an existing building, but rather the ghostly memory of one. 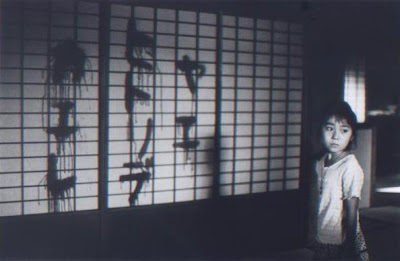 Opening with a carefree game of hide-and-seek ('kakurenbo'), tragedy strikes in an impressive sequence with a horrifying climax. One of my favourite scenes in a Japanese horror, because it took me by surprise. Possibly because I was expecting a less hard-hitting, children's movie.

The story skips from the past to modern day, as a quiet coastal village is struck by a series of child disappearances... and a reappearance. Events so unlikely that they're dismissed by the adults, leaving the children to solve the mysteries. Why is there always an old man on the quayside staring at the sea? Why do some of the children keep hearing voices? What's going on at the school building that's closed for the holidays?

The hot and sunny seaside location, presumably in Okinawa, is popular as a holiday destination for Japanese families from the main island. A policeman demonstrates a huge heavy door in the huge storm defences, which closes with just a hand crank. There's also a scene showing the Japanese lantern festival, as departed relatives are remembered with a flotilla of floating lanterns.

There are many intricate and cleverly designed visual effects that use extensive digital composting and even a little CGI which still looks really convincing, at least on this unremastered DVD. But the FX designs and the ideas, together with the performances combine to create a ghost story that delivers very visual surprises and a few shocks. The genuine feeling of loss, portraying ghosts as 'once human' rather than vengeful monsters makes a refreshing change.

Beautifully shot 2.35 widescreen, with flashbacks in striking monochrome, some of the scene transitions were so cleverly done, I had to rewatch to check what I'd just seen.

The film really needs a title change, like if they lost the '4' and sold it to the US. A high number on a sequel makes it look like a bad movie - but this should be high on any list of Japanese ghost story movies. 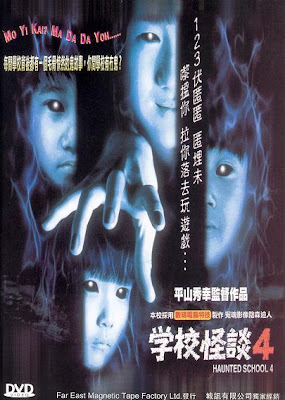 The Hong Kong DVD I watched is transferred from a print that had English and Chinese burnt into it, rather than optional subtitles. These are poorly translated and hard to read against lighter backgrounds - but it's the only translated version that I know of. It's a non-anamorphic widescreen release, all-region NTSC.

I couldn't find many photos, but there are some screen grabs on this German site...

I've already done short reviews of the first Japanese Haunted School (1995), and Haunted School 3. But I'd recommend instead the Gakko No Kaidan anime series of 2000, sold on DVD as Ghost Stories in the US.