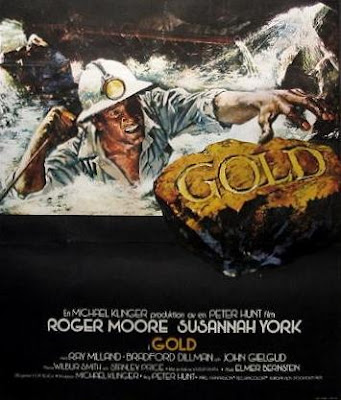 For some reason I missed this in the cinemas, and never ever fully caught it on TV. Maybe the publicity stills of Moore sitting in a bath with Susannah York put me off, making me think it was slushy. Anyhow, just seen Gold in 2.35 widescreen for the first time (on a recent region 2 UK DVD) and it's still very enjoyable, thrilling and surprising, with extensive location filming in Johannesburg, back when South Africa was split by apartheid. Watching it with a couple of friends who lived there recently helped add some additional insight.

While I've been looking through a few seventies thrillers, I bought Gold after remembering a scene with a killer Rolls Royce. Like many people, I'm wary of Roger Moore's James Bonds because of the lightweight family films they became, filled with far too much silliness. But his earlier Bonds, especially Live and Let Die are closer to Connery's toughness. Gold was filmed the same year as The Man With The Golden Gun but released slightly earlier. 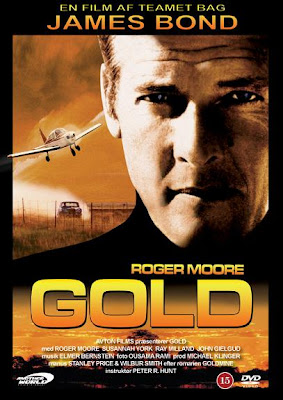 It's based on 'Gold Mine' by Wilbur Smith, a very popular author at the time, who specialised in thrillers set in Africa. With the sort of detail used for the diamond trade in Ian Fleming's Diamonds Are Forever, Gold depicts the trade from start to finish, from the rockface through to the financiers in the stock market. The opening titles show the process of mining and refining the ore. The leftover rock being relegated to huge slag heaps on the surface. These level, man-made mountains later form a stage for the film's climax. I'm told that the refining process has now been modernised and the slag is being re-processed to extract even more minerals. There's gold in them there slags!

But to dig all the ore out, miners have to go deeper underground than ever, a risky business. A cave-in kicks off the story, with troubleshooter Rod Slater (Roger Moore) risking his life to get everyone out. The mystery is why the trapped miners were so far off course with their digging. If they'd gone any further, they might have ruptured a huge undersea lake that could have flooded the mine forever. While visiting Jo'burg, I went down the last remaining liftshaft into a gold mine. You haven't seen darkess till someone turns off the lights down there. The escape shaft was also particularly terrifying, a small slanted tunnel to the surface - not for the claustrophobic. 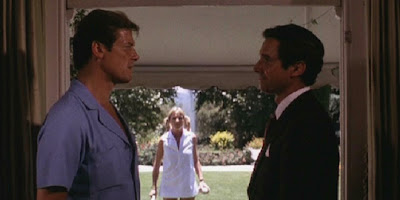 Like a true airport page-turner, the characters are closely linked by blood and bed. The daughter (Susannah York) of the owner of the mine (Ray Milland) is married to his deputy (Bradford Dillman), but she fancies playing the field. Meanwhile Bradford and his gay sidekick (Tony Beckley) are in league with the head (John Gielgud) of an international cartel. While Roger and Susannah hook up and go gallivanting, a murderous and explosive plot is being hatched...

Frankly, the sliminess of baddies doesn't get much better than Bradford Dillman and Tony Beckley. Gielgud isn't slimy, but is excellent at greedy ruthlessness, especially round a table with the big-hitters. It's not far removed from his aloof butler in Arthur, but without the humour, he's suitably dangerous. Dillman never fully escaped TV roles, but I've always liked his distinctive voice and sneaky eyes - he dabbled in horror films with Chosen Survivors, William Castle's Bug (1975) and of course Joe Dante's original Piranha (1978). Tony Beckley played several borderline gay roles, such as the disdainful Camp Freddy in The Italian Job (1969), but could also be a realistic serial killer, in the unconventional When A Stranger Calls (1980), his last film. Here he has a pad tastefully painted lilac and covered in pictures of male nudes, greek statues of course. Nothing to do with the story, just a little local colour, as subtle as a mallet.

Ray Milland is always a welcome face, here his career has somehow recovered from the truly awful The Thing With Two Heads (where the head of a white racist is grafted onto a black guy's body) and he's in his best shouty, confrontational form. I think his best horrors were The Man With X Ray Eyes (1963) and The Premature Burial (1962). His daughter is played by Susannah York, the only female character in the whole shebang. While she looks like butter wouldn't melt in her mouth, the actress has appeared in many cult movies, including the gruelling They Shoot Horses Don't They? (1969), and getting the first lesbian screen kiss in The Killing of Sister George (1968). She's most famous as Superman's mother in the first two Christopher Reeve movies. Ms York is happily still working, mainly on British TV. 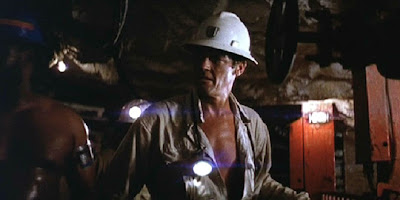 The interiors were filmed at London's Pinewood Studios, with some really convincing mining sets. But there's extensive location work shot in Johannesburg, in a country where apartheid was a political reality enforced by the white dictators of the time. While the story shows black and white miners working together in harmony, note that the mine bosses are all white and, even at social gatherings, the crowds are segregated into black and white. The miner's homes next to the mine look spotlessly clean and modern, but this wasn't the reality for the majority of black people in South Africa, and still isn't, years after the fall of the apartheid regime.

With larger-than-life characters and plenty of plot twists and surprises, one involving a six-year old Patsy Kensit (Lethal Weapon 2), this is still highly enjoyable and gritty action, particularly the climax. 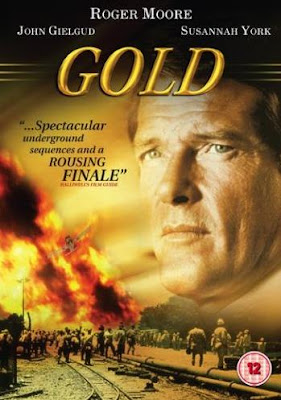 The UK DVD is a pleasant surprise, accurately presenting this 2.35 widescreen anamorphically. Though the cover artwork is far from inspiring, especially compared to the Polish DVD or the original poster. The film is also available in Germany.