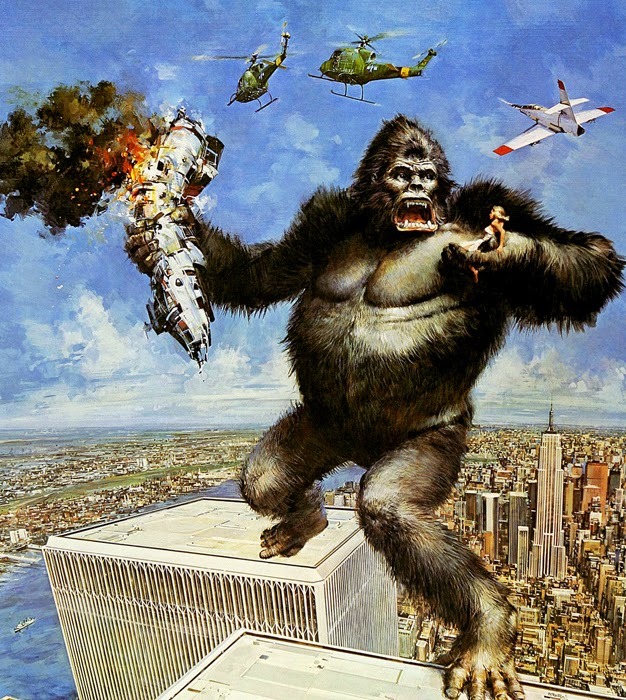 Sitting on a shelf of DVDs, or lost in a list of downloads, movie's are completely stripped of the advertising campaigns that launched them, no matter how massive the original hoopla. This King Kong was one of the biggest films of the year, with pages of newspaper and magazine coverage heralding its arrival. An early 'event movie', hoping to follow up on the Jaws phenomenon of the previous year, combining an animal-on-the-rampage with a disaster movie.


This 1976 retelling is widely regarded as inferior to the 1933 original, and its special effects and lack of ambition pale against Peter Jackson’s 2005 remake. But, as noted here on the Classic Horror Forum, it was nevertheless an influence on Jackson's version. I have a soft spot for this very seventies blockbuster, not that I don't regard Kongs 1933 and 2005 more highly, but I’ll also watch this one just as often. 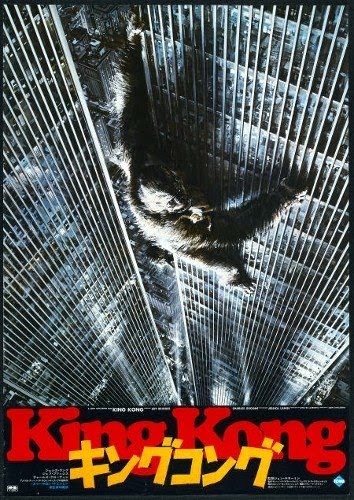 Flashing back to the 1970's, I had yet to see the original 1930s King Kong. In magazines like Famous Monsters of Filmland it looked like the best monster movie ever, full of dinosaurs and city-stomping. I was fascinated by dinosaurs and stop-motion animation, watching every Ray Harryhausen movie that I could. Ray had trained with King Kong’s special effects creator Willis O’Brien, and his movies forwarded the spirit of Kong’s adventure.

But I must have missed it on TV in the UK (until the early 1980s), and home video didn't exist yet. So the closest I could get was a comic book version of the story, a novelisation, and reading through the well-illustrated book, 'The Making of King Kong' by Orville Goldner and George E. Turner. 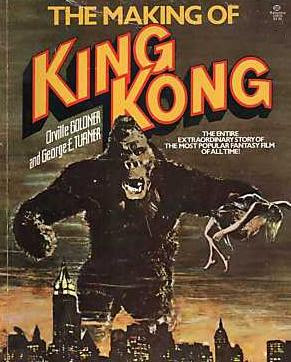 That's why the first Kong I got to see was the Dino De Laurentiis’ remake in 1977, when it reached the UK. The publicity was huge, concentrating on the full-scale Kong 'robot' that had been built, designed by Carlo Rambaldi (halfway between doing gory effects on Italian horror movies, and building E.T. for Spielberg). The wall-to-wall robot stories even made critics and audiences believe that the it performed the whole film! The publicity toned down the involvement of young FX make-up specialist Rick Baker, who worked with Rambaldi on the cable-controlled (an early version of animatronics) mask for the ape suit that Baker wore. He performed the bulk of Kong's shots throughout the film. In later films, he went on to perfect his 'ape suits' to uncanny effect, like in Gorillas in the Mist, as well as designing the shocking transformation FX in American Werewolf in London, The Thing and more recently Hellboy, among many other classic creations.

Storywise, King Kong '76 improves on rival versions with a story that launches straight away with the ship heading off for Skull Island, this time in search of oil, a rare and expensive commodity in that inflation-ridden decade. Hippyish animal-lover Jack Prescott (Jeff Bridges looking like a younger version of The Dude from The Big Lebowski) stows away onboard, forewarned that a big ape may also be on the island. Along the way, they rescue shipwrecked, scantily-clad Dwan, (Jessica Lange in her first screen role). 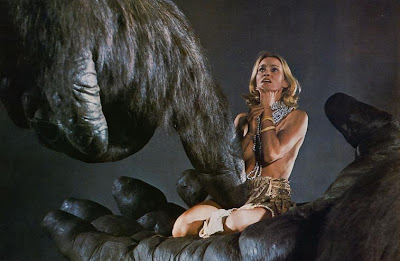 All the action is handsomely mounted, using real oil tankers and ships, and a bewilderingly large full-scale fogbank that hangs around the island. A spectacular Hawaiian location is used for the beach landing, and then the explorers encounter the immense wall that divides the island. That's in fact a gigantic full-scale outdoor ‘set’ - there’s no doubting there’s a lot of money on the screen and it’s looking good, until Kong turns up. 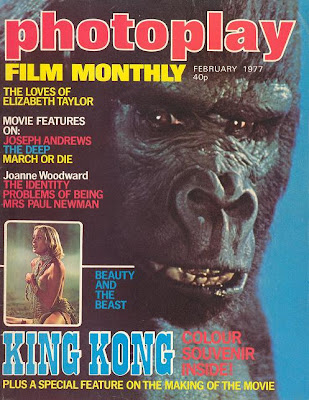 Compare and contrast - Rick Baker behind the mask...


As Dwan gets kidnapped and given to Kong. I realised that Kong wasn’t a giant robot at all, but a man in a suit composited into the live-action using the variable blue-screen optical process, which rarely blends all the elements together. All was not lost, but such an uncomplicated effect wasn't convincing. What saves this depiction of Kong are the close-ups of his face. Seeing Baker's real eyes behind the mask brings this Kong very much to life. And the amount of expressiveness in the mask is still very impressive.

The actual robot is only glimpsed head to foot in a couple of scenes, where it is almost completely static. But closer scenes successfully use the full-scale foot and hand, much like Jurassic Park, and it’s full-scale T Rex hydraulics. A huge gorilla arm and hand swinging through a set are perfectly convincing. No CGI, no dodgy compositing, just large-scale engineering and stuntwork. 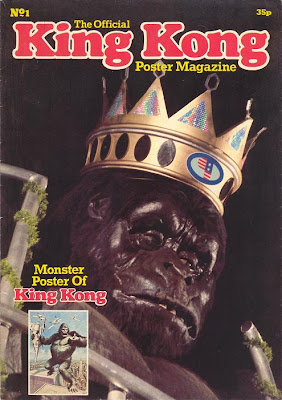 ... and the face of the full-size robot


Hollywood’s last resort in special effects is to use a man in a suit, and they haven’t put the years of expertise that the Japanese had built up. There’s simply not enough detail in the modelwork in the Kong suit scenes. While contemporary critics would scoff at the Godzilla films, the producers could have learned a lot from the expert use of slow-motion to increase the scale, low-angle camerawork could also have helped sell the idea of suited Kong. The central action scenes, such as the log bridge and Kong’s lair are both disappointingly fakey-looking sets. Compared to the expense of building the gigantic wall, why did they skimp on the ape scenes? 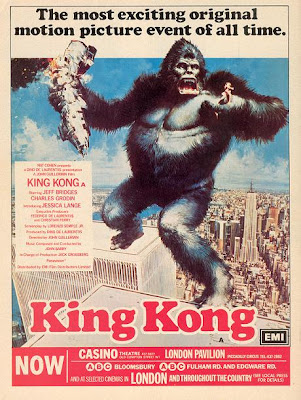 To the credit of the cast, they try and play it straight, Jeff Bridges certainly doing his best. Jessica Lange seemed a little phased thoughout, or was that her character? Back then, she convinced me that she was a bubble-headed blonde and I’d never see her act in anything ever again. Of course, she went on to garner far better parts, wide acclaim and two Oscars! Charles Grodin (Midnight Run) is believable as the nasty expedition leader, with the always watchable Rene Auberjonois (Deep Space Nine, Boston Legal) as his assistant.

There’s a chance to hear Jack O'Halloran’s rich voice – for Superman 2 he played Non, the mute super-criminal sidekick to General Zod. Rather riskily, John Agar appears in a bit part as the Mayor - casting the star of so many low-budget, frankly terrible monster movies surely begs us to draw comparisons, though here the budget is clearly higher than The Brain of Planet Arous.

The climax is both sad and surreal. The twin towers of the then recently erected World Trade Centre remind Kong of his mountain lair. As he climbs up it, and the Army congregates in the plaza. It’s hard to concentrate on the action without reflecting how dramatically the location has changed. Manhattan was used extensively for many movies during the 1970s, and the WTC was one of the city’s most identifiable and spectacular settings. By the time Peter Jackson's film was released, the Empire State Building was once again the tallest building in the city. 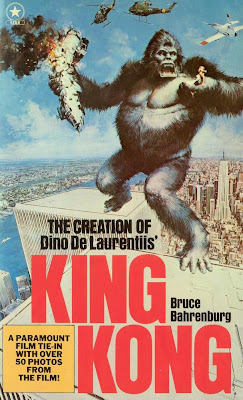 Throughout the film, some special effects work, some don’t. But it tells the story, and the large scale of the film still entertains. It’s sort of dated, seventies wise, but this adds to the fun. Though I’m now very aware that this version lacks a huge dollop of what the 1933 and 2005 movies have - style. Thirties fashion, architecture and design make the setting classy and atmospheric.

It’s largely a retelling of the original story, but the filmmakers have trouble keeping a straight face in making a monster movie, particularly when it comes to the dialogue. Scriptwriter Lorenzo Semple Jr, midway between the tongue-in-cheek 1966 TV Batman, and the 1980 comedy Flash Gordon, adds too many in-jokes, defusing the drama. 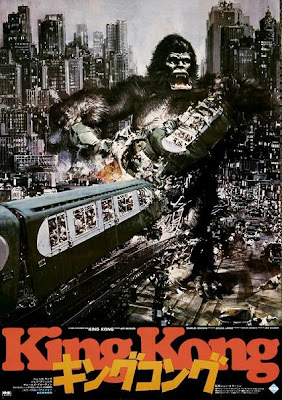 John Barry’s soundtrack, one of my favourites of his, takes the entire film up several notches, in atmosphere and anticipation. If only the visuals matched the grandeur of his music. Listening to the score, which has a few choice sound effects mixed in, always encourages me to imagine a better film.

King Kong '76 isn't perfect. I've pointed out most of the huge shaggy flaws. It's not the epic it aspired to be, but is still enjoyable for the cast, the scale and the locations. And compared to the 1986 sequel, King Kong Lives, also directed by John Guillerman (The Towering Inferno), it looks like a classic. 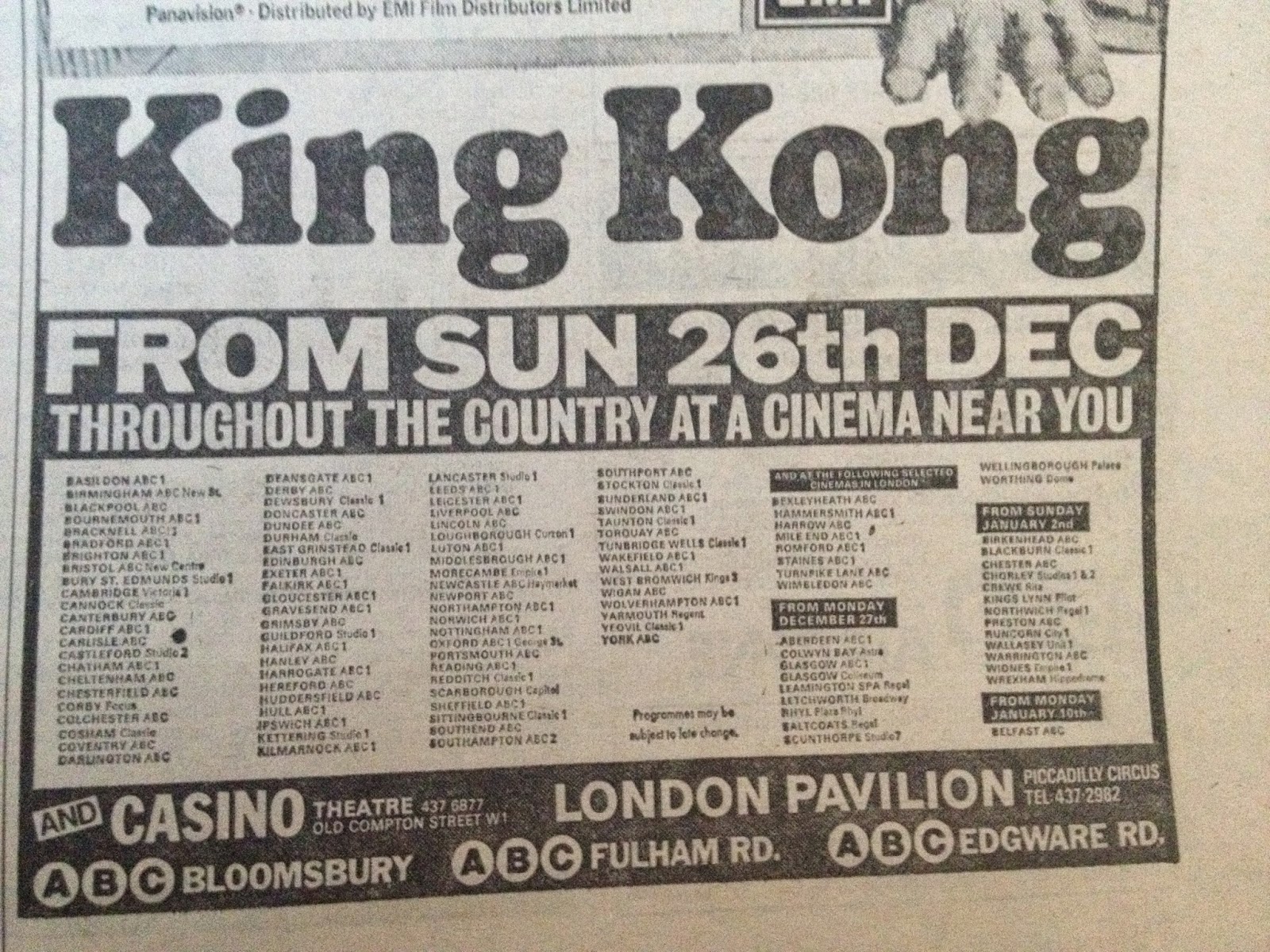