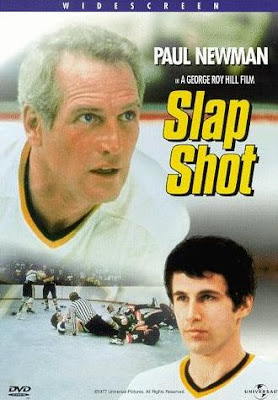 You won't find many sports films here in the Black Hole, unless they're of interest to non-sports fans, and Slapshot is still very tight, funny and entertaining. Though I was recently surprised to discover that this thirty year old, foul-mouthed comedy has started spawning sequels.

It formed an unintentional bridge between the original Rollerball and National Lampoon's Animal House, delivering violent sports action and drunken bawdy college humour. But it's also true to life and generally good-natured, though you've got to be impervious to the casual use of the words "fags" and faggots". Though it was the other f-word that gained attention at the time, particularly as it was coming from mainstream Hollywood star Paul Newman. 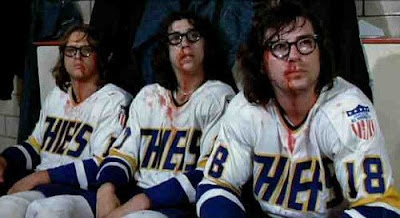 The Charleston Chiefs are doing badly in their ice hockey league, while representing a steel town that's inevitably closing its mills. The team's fortunes improve when they buy three teenaged players (who look like a gormless version of The Ramones). They turn out to be as good at dirty hockey as they are at dirty fighting. The Chiefs discover that by starting fights they can draw bigger crowds, and can also win games if they 'psych out' the opposition (a tactic which reminded me of Trey Parker and Matt Stone's Baseketball).

But can the team survive the brutal pummellings, win all their games, and prevent themselves from being disbanded by their owner?

The same script could easily have been made as pure exploitation. But while there's nudity, there's no sex, and in the brutal fights there's little blood. Under the subtle, almost documentary-style direction of George Roy Hill (who also directed the Paul Newman hits Butch Cassidy and the Sundance Kid and The Sting), it's also a sharp social comedy and a cold hard look at the lives of smalltown leaguers. The embittered 'hockey widows' bravely prop each other up, or take to the bottle. Meanwhile, the team goes on drunken regional tours, followed by a busload of groupies.

This is still as much fun as it was on first release, though I suspect more of the swearing has been restored, right up to and including the c-word. While there's ample portions of, the initial publicity was devoted to defending the abundant swearing, reminding critics that the scriptwriter was a woman, Nancy Dowd, who'd aimed to realistically portray her brother's hockey league. 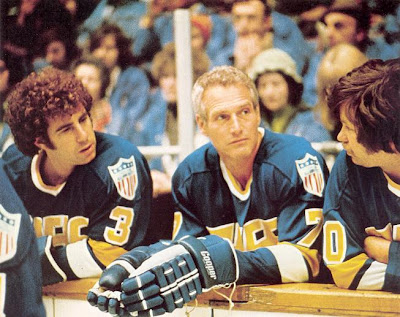 Paul Newman is always worth watching, even when he's unafraid to look bedraggled, as a man preparing for life 'over the hill'. He's among an ensemble cast, actors who had to perform most of their own ice skating, mixed with hockey players who had to act! But there are few actors who had any further success - co-star Michael Ontkean eventually became a mainstay of David Lynch's Twin Peaks (as Sheriff Truman), and Melinda Dillon (appearing in only one scene, casually topless) soon landed Close Encounters of the Third Kind. Ever-reliable Strother Martin (Ssssnake, The Wild Bunch) plays the team's shifty manager. 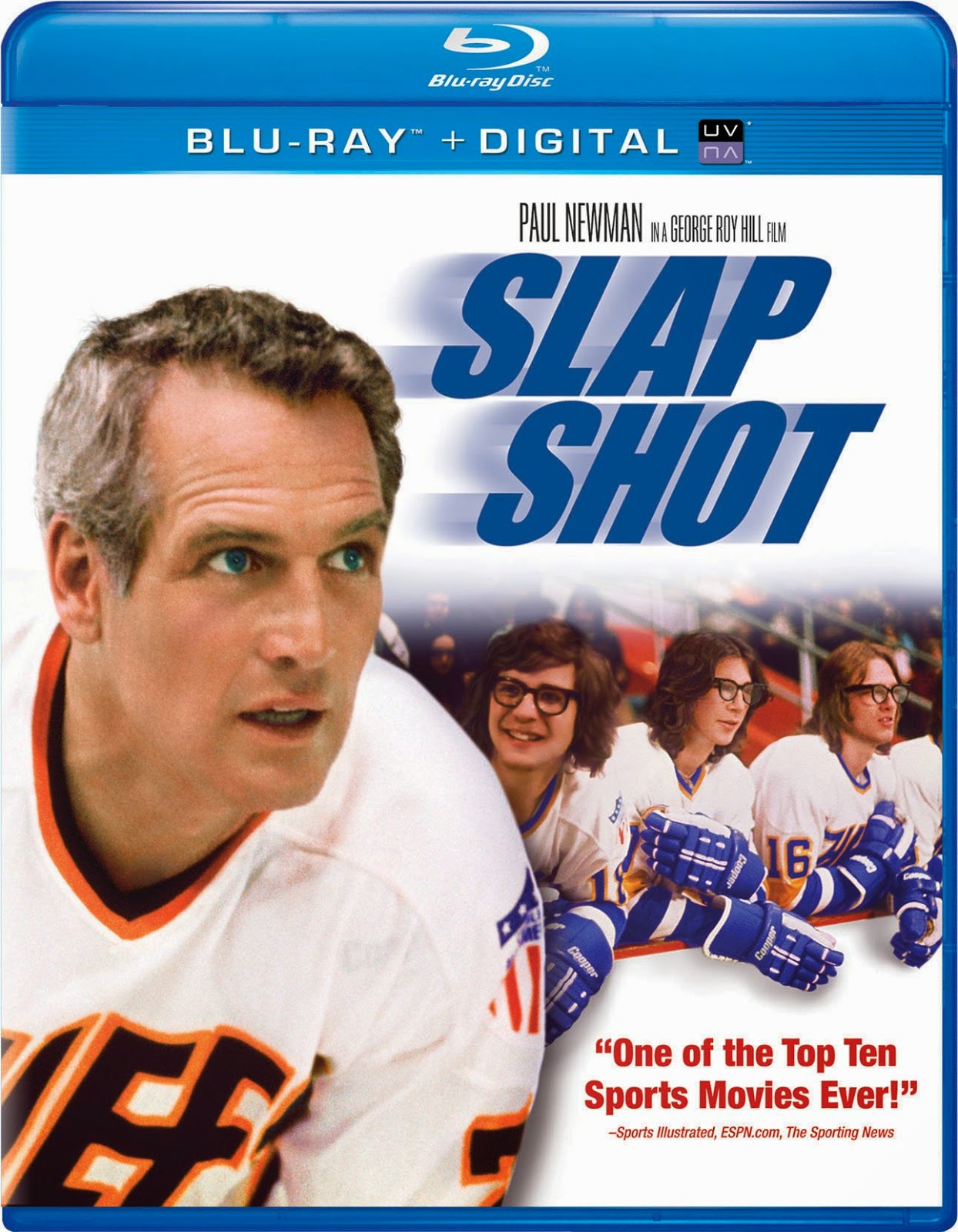 To tie in with the recent Slapshot 2 and 3 (which I'm scared to investigate), the first film always seems to be easily available on DVD, and now blu-ray. Looking and sounding sharp, the blu-ray also includes a "Hanson Brothers" commentary track, a brief interview with them and an original trailer.

It's drunken, gloves-off, fighty fun mixed with enough off-rink drama to involve most everyone. Thanks to director George Roy Hill (Little Big Man, Butch Cassidy and the Sundance Kid) it's a well-rounded film succeeding in many genres - action, comedy, drama... not just sports. 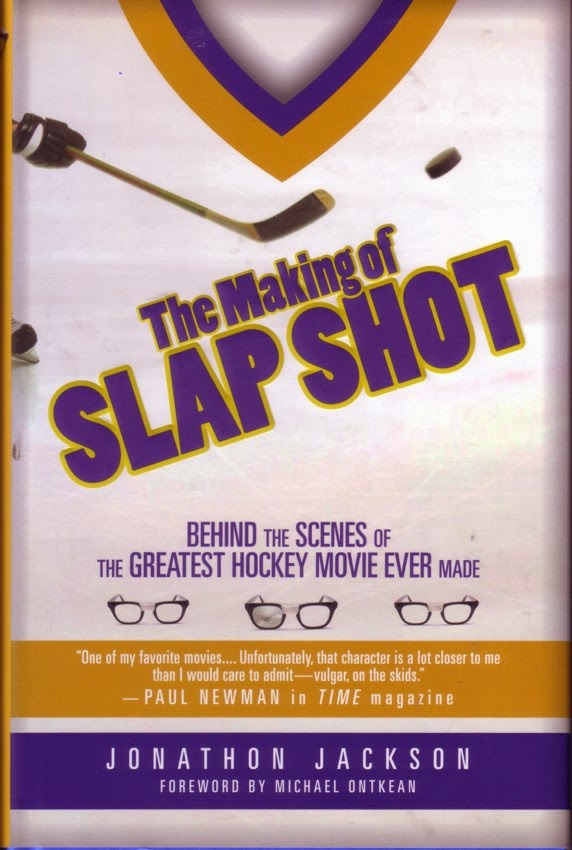 In 2011, this book belatedly appeared, cataloguing the enduring appeal of Slap Shot. While many of its unforgettable characters, in particular the "Hanson brothers", went back to playing hockey professionally, the film never went away. Certainly a favourite in the game itself, but also gaining a superb reputation among all sports movies.

The book details the fortunes of the Johnstown hockey team that inspired the script, and how it became a film. Al Pacino was very keen, early on, to play the lead, and the casting was all the more difficult by the requirement not only to be able to skate, but to realistically play hockey.

The film was set in the fictional 'Charlestown', but shot in the town that inspired it. The book demonstrates that there was a close and ironic parallel between the team and the town's fortunes in the story and in real life.

There's a long look at how the film was made and the lives of everyone involved afterwards. I gained a greater appreciation of the film, the director and the cast and was delighted that a favourite film had received some serious research after all this time.