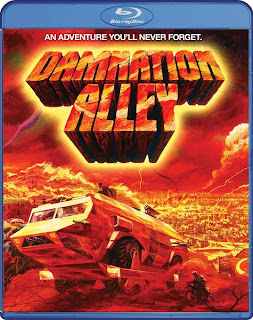 Daft but very watchable post-nuclear road movie...
Finally this apocalyptic sci-fi adventure gets a proper home video release. It's new to DVD and Blu-ray. I last reviewed this in 2008 after watching a pan-and-scan VHS to refresh my memory of the original cinema experience... This updated review now reflects the 2.35 widescreen Blu-ray from Shout! Factory. The story opens with a frankly upsetting vision of how easy and brief a nuclear apocalypse could be. A rather realistic depiction from the viewpoint of a nuclear missile bunker, the major cities of America are wiped off a huge viewscreen one by one. America is blitzed into a desert wasteland - using footage of actual test launchings and explosions. In amongst the military is a speechless Murray Hamilton (the mayor in Jaws), strangely uncredited. The entire Earth atmosphere is sabotaged and the survivors eventually emerge into a desert-ravaged landscape where the skies are cosmically confused. 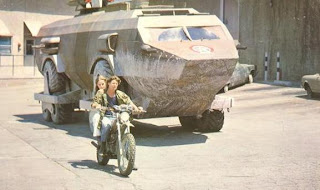 After another rather unnecessary disaster (reliant on even more stock footage), four men are left to try and reach other survivors. The only radio signal they can find is in Albany, New York (what made them so bomb-proof?). The only obstacles are giant insects, mutant hillbillies and a touch of bad weather...

These hazards are no more convincing than you'd find in 1950s' B-movies, especially the giant scorpions. This was released after Star Wars, so the special effects already looked inferior in the cinema. But watching it now, with a world of beserk weather, it somehow rings true today, depicting violent electrical storms, massive twisters and a sky that’s all wrong.

They travel in specially-fitted trucks which have impressive all-terrain triple-wheel assemblies and plenty of firepower. (But the stretchy bit in the middle looks less than radiation proof). They cross the continent via a radiation-free corridor through Las Vegas, Detroit and Salt Lake City.

I really enjoyed seeing this again, it was certainly memorable (as the DVD cover promises) while I'd completely forgotten the supporting feature I saw with it in the UK, Thunder and Lightning, a car crash comedy starring David Carradine and Kate Jackson.

It's good to see Jan-Michael Vincent when his movie career was peaking. He looks even hotter than token female co-star Dominique Sanda (1900, Steppenwolf). Top-billed and about to appear in Hooper and Big Wednesday the following year, he of course returned to TV with the hit series Airwolf.

George Peppard’s career was halfway between two hit TV series Banacek and The A-Team and yes, he has his trademark big fat cigar, as well as an ungainly southern state accent and a Nazi moustache. 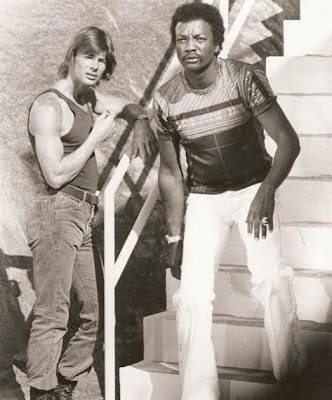 Vincent’s drop-out sidekick (above) is the late Paul Winfield, who scored many major sci-fi movies in his long acting career – Star Trek II, The Terminator, and Mars Attacks! Not to mention the Haiti zombie movie, The Serpent and the Rainbow.

While watching the excellent Little Children (2006), I realised that I hadn't seen Jackie Earle Haley in a film since Damnation Alley, thirty years earlier. After he’d given up on acting for a spell, he landed and nailed an award-winning performance, opposite Kate Winslet, as a sex offender trying to return to suburban society. His career is now completely back on track. In 1978, I didn’t know who he was, having deliberately missed the three Bad News Bears films that had briefly made him a child star. 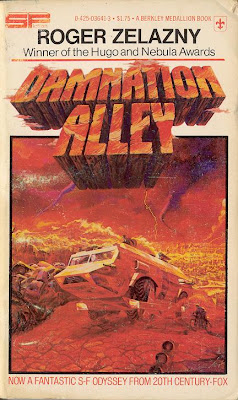 The novel was drastically revamped for the screen - the producer himself admits to being over-ambitious for the budget. In Roger Zelazny’s original story, the mission was to get radiation medication to Boston, like a futuristic Wages of Fear. Only law-breaker, ex-biker Hell Tanner knows the passable, less-radiated routes. He sets off in a radiation-proof truck and encounters giant bats, snakes, gila monsters, butterflies and biker warriors of the wasteland. So when I first saw the film in a UK cinema in 1978, my hopes of seeing some giant monsters were high. Instead, I got rather unconvincing scorpions and hungry cockroaches (dialogue, “the town has been infested with killer cockroaches”).

The scorpion and cockroach scenes were handled by micro-photography expert Ken Middleham, on whose work the 'insect-attack' movies Bug (1975) and Phase IV depended. The poorest effects are the use of floating models, which looked poor at the time, in 1978.

More successful are the extensive and complex optical effects used to replace every view of the sky in the many exterior scenes. Tracking the laser-lit fluorescent FX to the long, loose camera moves is very impressive for the time, and unsurprisingly not perfect. 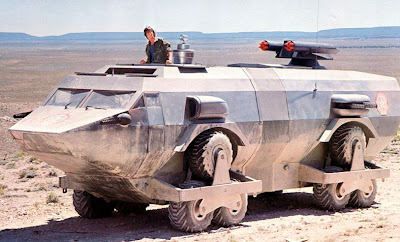 Best of all is the full-size Landmaster truck built by Dean Jeffries, who’s not had enough credit for his work. It's really good to see him interviewed in new Shout! Factory DVD extras (also on their Death Race 2000). Besides behind-the-wheel stuntwork, he built movie vehicles like the James Bond’s moon buggy in Diamonds Are Forever (1971) and helped design the Monkeemobile and the iconic Adam West TV Batmobile. His name is spelt two ways on IMDB (also as Dean Jefferies) halving and seperating his list of credits.
The bombastic, synthesizer-heavy soundtrack was composed by Jerry Goldsmith, a plus to any film, but was never released as an album. This is teased around the menus and featurettes on the Blu-ray so it must still exist somewhere in very good condition.

With huge holes in logic, this isn’t a movie to take too seriously after the intial catastrophe. But it’s enjoyable for many reasons and an early post-apocalypse road movie, just before Mad Max inspired so many others. 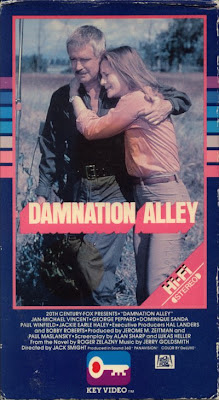 Damnation Alley looked lousy and confusing on VHS. Only 2.35 widescreen will do any viewing justice. The desert photography of the Landmaster trucking across the desert (including a glimpse of Meteor Crater) are standout visuals.
It was originally released in so-called ‘Sound 360’, which equated to a 6-channel stereo surround system for selected movie theatres. I'm guessing these tracks were still available to create Blu-ray's optional 5.1 and 7.1 remixes. 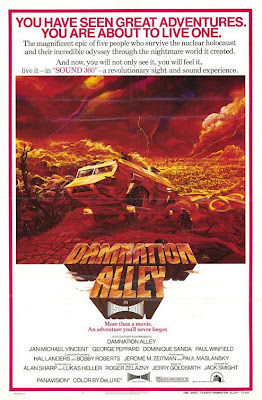 As always, DVD Beaver have the best Blu-Ray review and (ahem) screengrabs of what high quality to expect.

The star of the show, the amazing Landmaster vehicle, has its own webpage...