I was looking forward to this one – I didn’t think such a strong urban legend could possibly fail to frighten. A murderer with her face slashed open (echoes of The Man Who Laughs and Mr Sardonicus) with a huge pair of scissors to inflict a similar fate on her victims. 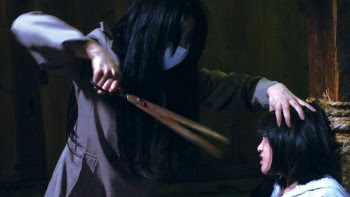 But instead of gory fun, we get a series of rather realistic child beatings. I’d imagined that any children in the story were just going to be frightened by her hideous appearance, but never actually harmed. It’s not very gory, but the suffering of the adults is far less fearsome than the extent of the child cruelty.

This makes the film nasty rather than entertaining – the issue of child abuse is worth exploring and explaining, but not in a horror film, where the problem is shown without any realistic resolution.

Similarly, the plot is very weak. A kidnap victim suddenly spots some broken glass to cut their bonds with, after it's been sitting in front of them for days. The heroes accidentally murder someone without any trouble from the police. The neighbourhood children have an endless supply of accurate information about the slit-mouthed woman, while the police don't. Even the mystery of the monster is wrapped up more simply than a Scooby Doo episode, with the viewers at least half an hour ahead. 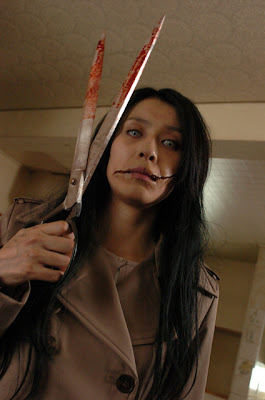 The movie's strong point is the monster’s appearance, but this is revealed early on, and many shots are so close, that you can see exactly how the effects have been done – there’s no mystery, no subtlety, no scares - just shocks. The director could have learned something from some of the poster art, that at least has her face defocussed behind the scissors in the foreground. The monster also has an array of powers, far more complicated than necessary, and mostly unexplained. The flashback story is rather feeble, explaining little more than the way she's dressed. Such a fearsome character deserves a sequel, with a better origin story and more adult victims, please.

So, too much kicking and stabbing of helpless victims, and not enough plot. It’s watchable enough for the performances and the bizarre title character, but I wanted it to have been so much better.

Director Koji Shiraishi has previously delivered Jurei – The Uncanny (which was OK) and Noroi - The Curse.

Eriko Sato, the mischievous star of the recent live-action Cutie Honey movie, is unrecognisable as a harassed, mousey schoolteacher.

The DVD subtitles are a little awkward in places, and the American title of Carved is a misleading one, making the film sound more like a Hostel/Saw/Hatchet job, rather than a yokai story.

I fear this film might be too much for a release in the UK. I wouldn’t be surprised if the British censor only passed this with extensive cuts, particularly with so much child murder in the headlines at the moment.
Posted by Mark Hodgson at 8:36 pm