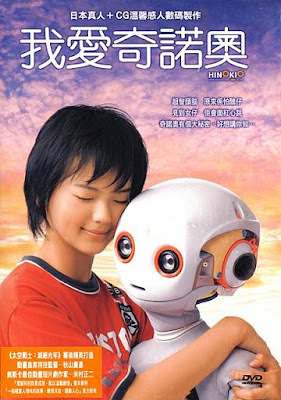 From the posters and the trailer, I was expecting the tale of a young boy attending school through the use of a robot surrogate. But this isn’t the only story in the film, which tries to tackle several serious themes at once, and still deliver a feelgood fantasy.

It begins on familiar Japanese ground, with the mother dying in the opening sequence! If you did a survey of all Japanese children’s films and TV series, you’d find that the character of the mother was dead more than alive. Prove me wrong!

A car crash has left young Satoru (Kanata Hongo) motherless, wheelchair-bound and ‘shut in’. Although set in a Japan of the near future, shut-ins are a peculiarly modern Japanese phenomenon of (mostly) teenage boys who refuse to leave their rooms in the family home. Usually passing the time with video games, they can reach their twenties (or older!) without ever going out, their parents covering up for them to preserve the family reputation.

In the film, his father (Masatoshi Nakamura) respects the child’s privacy by never entering his room unless invited. Dad is also a cybernetics scientist and has installed a huge interactive console in Satoru‘s bedroom. From this he can direct a robot to go to school for him and be his eyes, ears and mouth. There, he spots a girl he really fancies, but how can he meet her without leaving his room? Surely if he approaches her using the robot, he won’t stand a chance? In school, the robot is too much of a novelty to miss out on, and a gang of bullies decide to see how resilient its manufacture is. 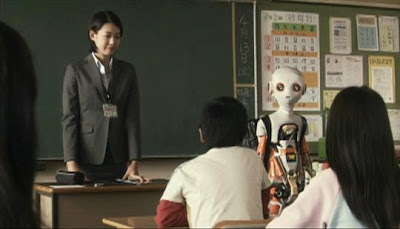 So far so good, but then we get two perplexing new subplots. One is about an online video game that actually connects with Purgatory (refering to the Buddhist gateway, where your fate is decided – reincarnation or hell) and is supposed to affect real-life events. This is a strand from the ‘shut-in’ problem – one character getting obsessively addicted to video games - but is barely followed through as a storyline. Instead more time is spent on the urban legend-inspired idea of a website influencing your fate – a theme followed to greater effect in the Girl from Hell (Jigoku Shoujo) series.

Besides the video game, a friend that Satoru makes friends with at school turns out to be a girl, not a boy. This revelation is successfully realised in the film, but again, hardly explored. The idea that he is best friends with a (short-haired) girl, but still really wants a girlfriend who’s a traditional (long-haired) beauty who is a complete stranger, seemed to be an unintentional, undeveloped idea in the film. Also sending out mixed messages is a scene where a child puts out an electrical fire with a pan of water!!!

The storyline sort of forgets Satoru (he's not even the child on the DVD sleeve) and concentrates on how the robot appears to be the one attracting friends instead of him. The story builds to a bizarre climax where a whole host of problems collide in disaster… 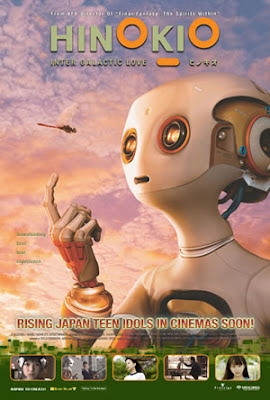 One of many images used in publicity that aren't actually in the film
Because of the English titles, and the (pretty dire) American soppy songs for the feel-good bits of the film, I got the impression this was aimed at a market far wider than just Japan. It could be sold as a kid-friendly A.I., a cyber-E.T. even. The robot schoolboy certainly looks very impressive, and portrays the sort of technology that Japan will probably be the first to realise.

The visuals effects look excellent, especially the robot walking amongst the children. The close-ups are slightly less convincing because that’s when a more jerky animatronic prop is being used. Other special effects involving green-screen look a little fakey, but it’s a children’s fantasy, so hey. 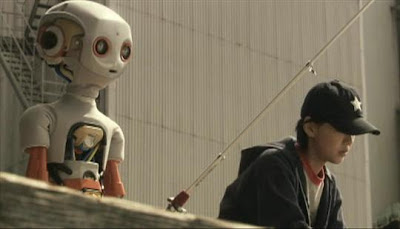 The child actors are totally convincing and make the movie work as well as it does, and make the robot a believable character too. I enjoyed the film, but I’d advise that you don’t follow the story too closely, and just let it happen. It’s the journey that’s important, not the destination.

The official Hong Kong DVD (pictured at top) has excellent English subtitles, 5.1 Japanese audio, an anamorphic widescreen 16:9 picture, but only a trailer for extras.

Finally, the title of the film has ‘Inter Galactic Love Story’ written under it - I've watched it and still don't know why! Maybe it’s alluding to the meeting of two worlds, robot and human, and got lost in translation? 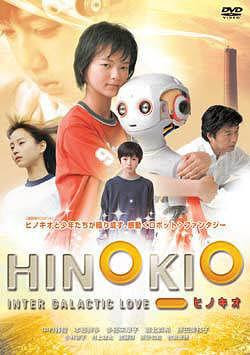 The Japanese DVD cover, with THAT tagline