Ghost Hunt started as a successful manga
GHOST HUNT
(2006, Japan)
TV anime, 25 x 25 minute episodes
This Japanese anime series is about a research team for hire, who solve mysterious hauntings. Each case is a story that lasts about 3 or 4 episodes. Each case is different to the next, keeping the series interesting from start to finish, with the characters developing nicely. It’s sometimes scary, sometimes funny, sometimes a detective story. With such a wide appeal, this could easily run to more series, or even live-action, and am surprised it hasn’t been announced on DVD in the west yet.

They are investigating a violent poltergeist, using both scientific monitoring and psychic 'sensitives' to gather clues. They then try and combat it with exorcisms, from a range of religious denominations - like shinto, catholic and buddhist. The phenomena vary from yokai, ghosts, to poltergeists - the team never know what they're going to be facing next. But usually there are lives at risk, or souls to be saved. This series strongly reminded me of the classic The Legend of Hell House (1973), which also had an electronic approach to ghost hunting, backed up psychics. This hunch was clinched by the use of captions counting up the days into the haunting. That film also mixed ‘sensitives’ with a scientific approach to 'cleansing' an intensely haunted house.

In Ghost Hunt, Mai narrates and we often hear her thoughts of the other characters. Initially a lowly assistant, she soon finds she's not as useless to the team as she thought. 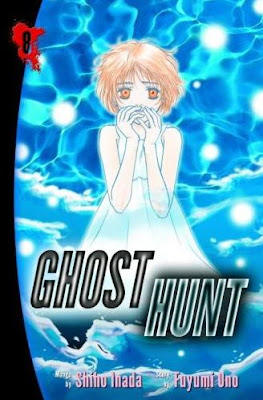 I'm sure this accessible series, mixing humour and mystery with a dose of supernatural horror, will be widely popular. The original manga are now becoming available in the US and UK, translated into English.

The original Japanese website is here... with a great splash-page of all the regular characters.

The Wikipedia page is here, with loads more detail about the story.

Ghost Hunt isn't too scary, but scary enough. If you want a really scary anime, try the three-part OVA, The Portrait of Petite Cossette, for an almost plotless descent into vividly portrayed, obsessional madness...