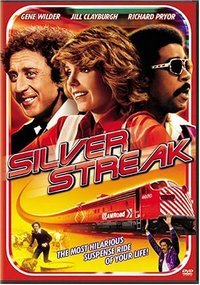 Finally on DVD widescreen and stereo, Silver Streak was the film where Richard Pryor and Gene Wilder began their cinematic partnership as a comedy duo in three further vehicles. But it’s also a comedy thriller in the vein of North by Northwest, and a train disaster movie!

Gene Wilder starts off as a mild-mannered innocent caught up in international intrigue. After an intimate scene with Jill Clayburgh, bordering on raunchy, he convincingly transforms into a romantic (seventies) action hero. Occasionally his comic touches reach the manic level that made him famous in Mel Brook’s classic Blazing Saddles and Young Frankenstein. If you enjoyed those, I’d recommend this and The Adventures of Sherlock Holmes Smarter Brother as his strongest non-Brooks films.

There’s a James Bond undercurrent to the casting - Clifton James had already appeared in Live and Let Die and Man With the Golden Gun as the stereotypically redneck Sheriff Culpepper, but here gets to tone down the hick accent and display his excellent comic timing. Richard Kiel appears here as a gigantic killer with shiny teeth before his famous role as Jaws in The Spy Who Loved Me and Moonraker.

Patrick Magoohan (star of cult TV series The Prisoner) makes a rare appearance and is an excellent baddie mastermind. You can tell he’s bad because he addresses black people with the n-word.

Race plays a major part here, even though the film is essentially a summertime family film. An effort has been made here to have several black characters in the story. They aren’t blaxploitation cliches, even though the actors are playing waiters and a thief! The director dares to tread a fine line in a scene where Wilder has to wear shoe polish and try and pass for black. Made in this pre-PC period, the film easily manages to be inoffensive and funny even today, mainly thanks to Pryor’s lightning tutorial. Silver Streak was Richard Pryor's first mainstream hit, and it was hugely successful, launching him as a bankable star. 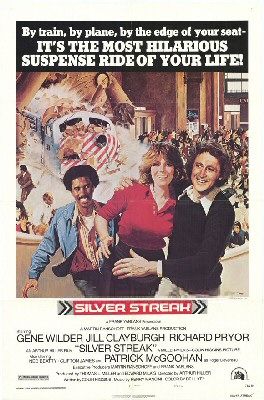 Let’s not forget the action, there’s stunts on top of, jumping out of and crawling around on the outside of the speeding train, of course. A spectacularly filmed helicopter chase and running gun battle. Not to mention, the climactic runaway train piling into a station – filmed by cladding a juggernaut lorry to look like a locomotive, and ramming it through a huge set as dozens of stunt people run away, just in front of the destruction. All the stunts in the film looking genuinely dangerous - one carriage-to-carriage 'transfer' looks positively reckless.

The mixture of comedy and thrills was a hit for all concerned – writer Colin Higgins went on to write and direct his own hits with Foul Play and Nine to Five. Train disaster movies continued through the decade with the downbeat catastrophe of The Cassandra Crossing. Even a TV movie expanded the 'runaway train and two helicopters' scenario to an entire TV movie with Disaster on a Coastliner (imagine William Shatner as Steven Seagal in a low budget Under Siege 2).