GODZILLA VS BIOLLANTE (1989) finally on DVD with subs 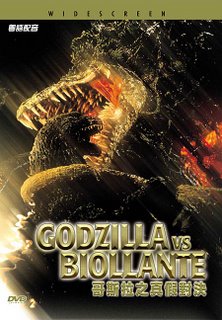 The image appears to be a little soft, so I can only assume that this hasn't been taken from a digitally remastered source. It is however anamorphic widescreen with stereo audio. The English subtitles are mostly well translated, but have simplified Chinese included above them.

The DVD is available from Region 3 online dealers like HK Flix and CD Wow.

The film followed up The Return of Godzilla (aka Godzilla 1985) and kick-started a successful run of nineties Godzilla films.

The Return of Godzilla is also now available on Region 3, in the rarer, longer Japanese cut (without the embarrassing Raymond Burr scenes). It's in Japanese with English subtitles. Super-X !

I've updated my rundown of ALL 28 of the Japanese Godzilla films available on DVD, go to my checklist here.