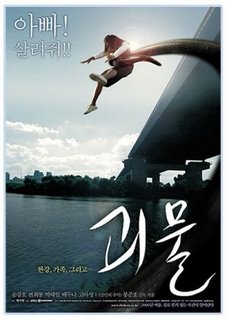 THE HOST (South Korea, aka Gwoemul)

The Host with the most (box-office takings in Korea)

From the very first Host posters, I’ve been wanting to see this. Thankfully on Monday, Frightfest in London closed their annual horror and fantasy film festival with it. I don't want to spoil the plot - this has only been released in Korea so far (where it’s their most successful film ever – outselling the war epic Brotherhood and topping even The King and the Clown). I’m hoping that it's success will spread, and many of you will soon get a chance to see it.

The producer’s have taken great pains not to give away too much of the story and to restrict spoiler pictures of the monster being released (especially when you really need to see it move). It’s much more of a pleasure when the story comes as a surprise.

Yes, The Host is a monster movie, but you can’t pigeonhole Jaws like that either. It’s a lure to draw us in to see a fine Korean thriller/black comedy/drama… with a monster. I’ll go out on a severed limb and compare this film favourably to Jaws – in fact in my mind, it’s second only to Jaws. You really get involved with the characters before the monster kicks in. (Don’t worry you don’t have long to wait.) The monster isn’t gigantic, it doesn’t knock over buildings, it’s just large enough to knock over cars, trucks, people…

In fact, imagine if you will, the horror of a large shark that can travel on land… (and I thought that Junji Ito’s Gyo manga was unfilmable!)

I’ll say no more, even though I’m busting to give this a full review. I’ll just say this was very, very entertaining, and it didn’t pull it’s punches. It avoids many cliches of the average Hollywood blockbuster.

It is instead a very Korean blockbuster. The story also manages to say much about modern-day Korea, and many of it’s society’s strengths and foibles, which is probably why the film is so popular in the cinema there.

The film also serves an international audience and I can’t wait to see it again. Hopefully in a cinema in Britain, before it joins the inevitable DVD shelf. But maybe I’ll hold out for an HD release… and look forward to seeing The Host all over again.

I hoped I was onto a winner when I first saw the cast, they’re becoming very familiar faces to me. Hie-bong Byeon (from the both of the director’s previous films) excels as the father of the central dysfunctional family. Kang-ho Song (star of Sympathy for Mr Vengeance and Memories of Murder) plays a similar role to his turn in The Quiet Family, as his lazy, slightly stupid son. Du-na Bae (aka Bae Doo Na, from Tube, Ring Virus, Sympathy for Mr Vengeance) as the daughter. The likeable Hae-il Park (as the younger son, also from Memories of Murder) and memorable newcomer Ah-sung Ko (as the grand-daughter) complete the family.

Full marks to director Joon-Ho Bong (Memories of Murder) for also getting strong actors to play the few Westerners’ roles. I really wasn’t ready for Scott Wilson to appear in the opening scene – a bolt from the past from cult movie The Ninth Configuration and Exorcist III (both directed by the writer of The Exorcist, William Peter Blatty). 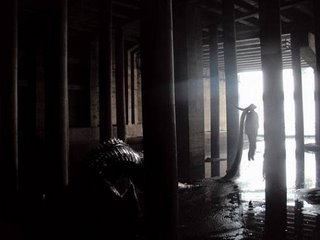 The Host.
Do you want to know more?

Here’s a heap of trailers on MovieBox or if you don’t want choices, here's the best trailer so far from Japan, on the omniverous Twitch Film site.

Monster movies from Korea have been pretty poor in the past, like the awful Reptilian, (a remake of the awful Yongary). From the trailers, I thought that forthcoming giant dragon/serpent D-War was going to be a similar approach, but a marked improvement. But after a very long post-production, I think D-War has waited too long for it’s release (later this year), and will now only serve as an anti-climax after The Host, adhering as it does to the traditional gigantic monster movie formula (Army tanks vs building-destroying monster). But we’ll just have to wait and see.

Much as I love the gigantic monster genre, epitomised by Japan’s Godzilla movies, The Host heralds the near-future of monster movies. Much like the Gamera trilogy gave the genre a kick up the backside in the nineties.

Please look forward (and behind you) for The Host. 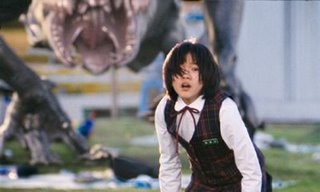