DINOCROC and THE BRUTAL RIVER - A couple of huge crocs! 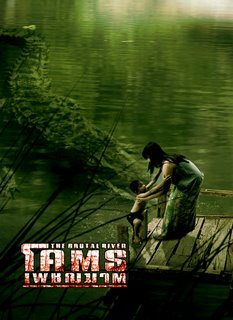 2 recent films with monster CGI crocodiles on the loose

I enjoy monster movies, and I want more than anything to tell you about two exciting, action-packed movies with marvellous monsters in them - movies that deliver what their promotional artwork promises...

Instead, this is yet another warning to the curious... 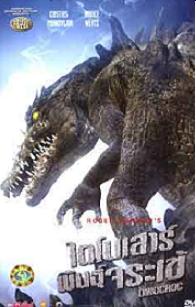 Evil scientists mucking around with accelerated growth drugs and inadequate containment procedures, loose DINOCROC on the world. It's a monster crocodile spliced with a two-legged dinosaur. It swims, it runs, it kills a few people. In between meals we get a turgid love story and some inept scientists trying to work out what the evil scientists are up to.

It's a rip on the plot of PIRANHA, but fails to rip the wit, the gore and the suspense of that 1978 classic, which was itself a Roger Corman produced Jaws-rip, directed with gusto by Joe Dante and written by John Sayles.

Nowadays the name, Roger Corman, above the title is alas not a seal of quality. But still DINOCROC suckered me in - if only the monster looked as good on the DVD cover as it did in the film. Admittedly, it's sort of convincing in the many night-time scenes, but it's back legs look a little too weedy to support its monster body. The attack scenes are mildly engaging, but never convincingly gory.

To be fair, DINOCROC has serviceable direction, a mixed ability cast, and a reasonable soundtrack, but I can't see this will ever be remembered for anything more than the snappy name (ouch). With PIRANHA, Corman attracted a talented team and created something special on a low budget.

Occasional moments of tongue-in-cheek black humour break up the lack of action in the first half of the film. The low-rent action races the second half to a logical if unexciting finale. There's a couple of rule-breaking plot twists, a little satire, but nothing to raise this above the level of an afternoon cable channel time-killer.

I watched the Thai DVD (pictured above) - which is a cheap way to watch a cheap film - but it's only a 4:3 pan-and-scan release. You'll have to get the Region 1 US DVD to see DINOCROC in 16:9 widescreen. 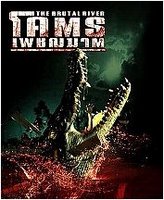 Meanwhile, in Thailand, they're still trying to rip off JAWS. New Asian film news website 24FRAMESPERSECOND alerted me to this one. This new movie supposedly tells the story of a monster croc that went on a killing spree in the sixties. First picking on a few isolated villagers deep in the rainforest, the croc went on to defy the best efforts of both holy men and the police force.

Great posters, but... It may be a good idea to make a low-budget monster movie to cut your movie-making teeth on - just don't let anybody see it until you've got something good. This is nicely shot, but completely lacking in suspense or excitement. Even during the 'action' scenes, there's a feeling that the story is treading water. For example, a man gets bitten by the croc - he thrashes around, people look horrified, he thrashes some more, no-one does anything, he keeps thrashing... The scene doesn't develop. Cross-cutting between victim and croc isn't telling a story, it's more like watching ping pong.

Also, the characters and story are really basic (how to establish a love story? - let's have a love song!). The actors only need to look scared, look horrified, or scream in agony (at something offscreen). Okay, there's a little gore, lots of dodgy computer generated monster croc, and no plot twists. I dare anyone to watch this without skipping forwards.

If anything, this is an excellent lesson in how not to make a monster movie. A few shots swiped from JAWS only reminded me that I really should watch JAWS again.

So please, if you think you'll like either of these 'crocs', please watch JAWS, JAWS 2, GRIZZLY, ALLIGATOR and PIRANHA first. If you want to see good CGI monsters, watch any JURASSIC PARK 1, 2 or 3, or even GODZILLA (1998). Then and only then, watch DINOCROC or BRUTAL RIVER.