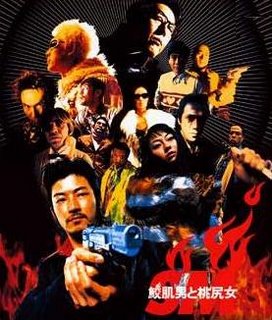 Very enjoyable, though I couldn't tell that this was based on a manga. You can usually guess if you're watching something with 'comic book' origins, but this is a well-written script brought to life by adult performances.

Plot time. Bankrobber Samehada tries to cheat money out of his mob. On the run he's rescued by Toshiko, a timid hotel clerk who is also running way - from her lecherous uncle. Heavily armed, the outrageously well-dressed mobsters close in on Samehada, not realising that the uncle has contracted a kidnapper to apprehend Toshiko.

This is one hip movie, though maybe it lays on the cool a little thick: the clothes are designer labels, the guns are big, and if you smoke, you light up in the flashiest way possible.

To be fair, the characters are as memorable as their outlandish outfits, brought to life by an ensemble cast who look like they've been on the road together for years. The way they bicker, constantly assert their pecking order, and kill time together looks very real.

Yet this is a black comedy, not reality. The dialogue aims for a Tarantino quality, successfully so. But while the gangsters amuse us with their trivial preoccupations, we don't forget what they really do, as an early gun battle proves. Likeable characters die, blood gets spattered up the walls. This is as it should be - I'm personally very tired of 'gun-comedies' where hundreds of rounds are fired but no one gets hurt.

The film is fast-paced, yet the director keeps the camera quite distant, usually static. There's no shaky 'action movie' handheld camerawork to fake the excitement. Instead we get carefully framed tableaux within which the characters can perform. This is a method that director David Lynch often uses. Mercifully, we are also kept distant from some of the violence - a beating with a baseball bat looked like it couldn't possibly have been faked!

The cast are uniformly strong, but the female characters are underused (the gangster 'moll' in particular) and the Peach Hip Girl gets plenty of action but none of the juicy dialogue. We start the film almost exclusively in her company, and share her pain and disorientation as events rapidly overtake her. But we then lose her viewpoint as the chaos escalates and the rest of the gang moves in.
But I guess this is more a movie about guys, for guys. It's all about criminals solving situations the violent way. You're forced to identify with the guy who commits the least worst crimes - anti-hero Samehada, played effortlessly by Tadanobu Asano. This actor has appeared in Takeshi Kitano's recent works as well as cult hits like Ichi the Killer. He keeps the tone light without playing it for laughs. He plays Samehada with a wicked smile and the confidence of a bankrobber who rarely loses his cool.

His formidable opponents include bossman Tanuki (Ittoku Kishibe) who wears a black leather overcoat and waistcoat custom-made to hold his collection of throwing-knives. There's Uncle Sonezaki (Youhachi Shimada), a slave to his centre-parting who hires a hitman to sort out his lovelife. My favourite was Yamada (Tatsuya Gashuin), the nerdy hitman, who wears his stripy tank top sweater tucked into his trousers... All these guys only have limited time onscreen, yet you want to see much more of all of them.

The only real disappointment is that the story doesn't keep moving locations, and starts to run in circles. This is the only evidence of the relatively low budget, everything else about the film works.