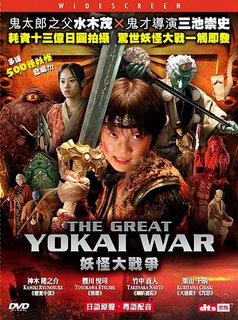 I've been waiting for this one for over a year and it's finally out, with english subtitles, on DVD in Hong Kong. I got the 2-disc set (pictured) but there's also a single-disc HK release available.

Ever since I saw photographs from the 1960's Yokai Monsters trilogy I'd wanted to see them (see the pics here...) - luckily all three movies were released on DVD in the US recently (as 100 Monsters, Spook Warfare, Along With Ghosts). Now one of Japan's top directors has (sort of) remade Spook Warfare, giving us a unique epic monsterfest - but you might want to do a little homework before seeing it...

Tadashi, a 12 year old boy has moved to the countryside away from his home in Tokyo. He starts seeing mischievous demons in a nearby forest. They've been stirred up by a powerful spirit who's preparing to go to war with the human race... first stop, Tokyo.

The cast are spectacular, particularly the young lead, Ryunosuke Kamiki, who's convincing but never cute, in a very tough and physical role as the young hero Tadashi. The baddies Sada and Agi, look stylish and dangerous. Agi is the formidable looking but almost unrecognisable Chiaki Kuriyama, here landing her best role ever as a demon terminatrix. She gets great duels, great make-up, great dresses, great scenes. She's finally matured from her endless schoolgirl roles, wonderful though they were (scene-stealing in Battle Royale, and Kill Bill Vol. 1 in particular). The actors, together with excellent make-up effects, bring the central band of Yokai to life. The water spirit, Kappa, is particularly endearing as played by Sadao Abe (unrecognisable from his school bully role in Uzumaki). Many venerable actors who don't normally do this sort of thing have been enticed into working with Miike, and also through their own childhood memories of Yokai.

The CGI look of the battle scenes and metal demons is no more annoying than the Harry Potters or Narnia FX. A conscious decision has been made to produce a uniquely Japanese fantasy epic of the same calibre as Hollywood, but without bowing to international tastes.

The main influence on Yokai Daisenso is more Shigeru Mizuki than director, Takashi Miike. Indeed according to the supplemental interviews, Miike was hired as a director after all the main Yokai characters had been picked! Many of the cast and crew name Mizuki as a part of their childhood - his Yokai books, manga, TV series and encyclopedia make up a formidable body of work. Besides chronicling the historical Japanese tales of ghosts, spirits and demons (some of them inherited from Chinese folkore), Mizuki has single-handedly kept the subject alive by placing the characters in modern settings, for instance through the stories of Kitaro, the ghost boy. I'll be talking more about the Gegege No Kitarou series and movies in another entry - needless to say, after 40 years of manga and anime, with a new yokai every episode, there are an awful lot of demons that the Japanese are familiar with that we've never seen before. We're in danger of missing out on the fun when each Yokai appears in the new movie: there are references, in-jokes and the fun of recognising your favourite monsters. Imagine if Pokemon had been a smash hit for 40 years - how many adults would have it as part of their childhood?

My own favourite is the Rokurokubi, the snake-necked maid. Her main scene in Yokai Daisenso is spectacular and funny... I'll say no more. Miike suceeds in showcasing dozens of major Yokai characters. But there are rather a lot of Yokai to fit in... one scene was shot with a crowd of 500 extras dressed as different monsters, another scene features 20 million CGI monsters!!!

As you can tell, the extras DVD in this set has been subtitled in English - the documentaries and interviews are valuable in understanding the ambitions of the Producers and the Yokai phenomenon. Sometimes though the translations go slightly awry - (unlike the movie subtitles which are very good) - at one point it says that Shigeru Mizuki is 73, when in fact he's 83 - he lost an arm serving in WW2. But, it's wonderful to hear from him and the other members of the cast, like Chiaki Kuriyama. Also, you don't see many press conferences that are punctuated by an earthquake - but it's Japan, they just carry on regardless!

For a complete breakdown of the DVD extras, see the great review at DVD Times, but watch out for the spoilers... DVD Times DVD review

So, overall it's a very, very richly detailed movie. A huge creative effort from everyone involved, including Takashi Miike, who normally knocks out several films a year, here devoted over a year to one film. While it's not as consistent as his recent Zebraman, it's certainly an epic monster rally for fans to treasure.
Posted by Mark Hodgson at 12:41 am