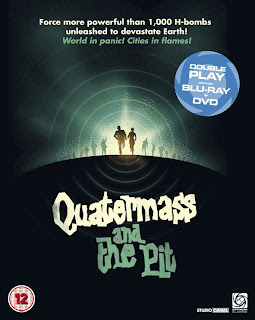 QUATERMASS AND THE PIT
(1967, UK, Five Million Years To Earth)


A unified theory that explains everything that's wrong with the world...

For Halloween, we watched all three Hammer films featuring that unlikely sci-fi hero Professor Bernard Quatermass, prompted by the arrival of the new Blu-ray release of Quatermass and the Pit (above).

Although it's the third of the films and adapted from a BBC TV series, this low-budget movie pushes ideas that rival and even mingle with the extra-terrestrial plot of 2001: A Space Odyssey. As alien visitations go, it looks small scale, not showing the global reaction but just a few streets and buildings in the centre of London. Even so, its claustrophobic approach is still largely effective today, mixing up apocalypse, sci-fi and horror into a unique, fantastic story. 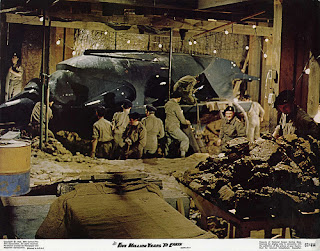 With three hours of TV scripts to cut down into a fairly short film, the story rips along, throwing up some very grand ideas along the way. An Underground subway extension project hits a wall when a large metal object is found buried in the clay. A huge futuristic missile that appears to have landed before the Stone Age. Archaeologists and military experts can only guess what it might be. The more clues they get, the less sense it makes. Only Quatermass's wild theories can explain it all. But while he tries to warn everyone away, curiosity and the need for public transport unleashes forces that threaten to destroy the whole city.

Thankfully, Nigel Kneale gets to adapt his best story for the big screen (unlike Hammer's The Quatermass Xperiment and Quatermass II). Besides original scripts, Kneale was excellent at adapting other people's work for the screen, such as 1984 and The Woman In Black for TV, and HG Wells' First Men In The Moon for the Ray Harryhausen movie. 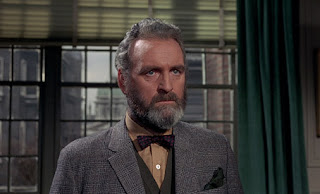 Andrew Keir (Dracula - Prince of Darkness) provides Quatermass's most rounded characterisation, better than even Sir John Mills in The Quatermass Conclusion. Besides his usual bullish attitude, the rocket scientist here shows warmth and even vulnerability. He's teamed up with a pair of experts as inquisitive and open-minded as himself, James Donald (The Bridge On The River Kwai, The Great Escape) and Barbara Shelley (also Dracula - Prince of Darkness, Village of the Damned), both of whom steal several scenes when it's their turn. 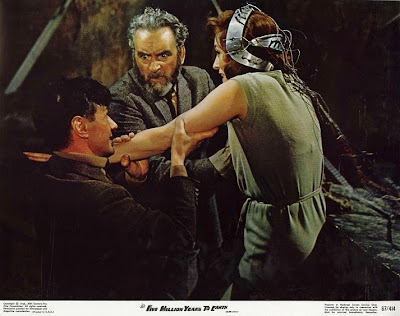 After her startling transformation from prim and proper wife into a ravening vampire, it was hard to imagine Shelley could top that. But she convinces us that she's possessed in several scary scenes that purely work due to her performance. A telekinetic troublemaker, years before Carrie. 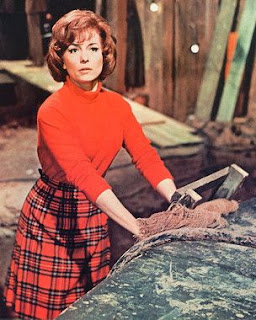 In another brief scene that gives me the chills, a timid victim is cut down by the uncaring power of the silent majority. As chaos spreads through the city, blank-faced crowds mindlessly kill any 'others' with their telekinetic powers. It's like the Children of the Damned have all grown up and gone on a rampage.


Admittedly, the special effects are stretched to their limits, considering it's a low Hammer budget trying to put on a Lifeforce city-wide catastrophe. Some of the exterior sets look too much like a backlot, but the London Underground station interior at the core of the story still looks excellent. On Blu-ray you can now check out all the Hammer movie posters lining the walls! It's clever the way that so much happens on the same street - every house, door and alleyway outside the station entrance gets its own scene. 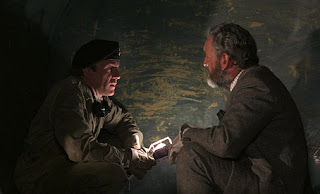 Wires are occasionally visible, you can see them if you look for them, but not if you're following the story. Barbara's 'vision' is the lowpoint of the film in an over-ambitious scene.

After a lifetime of immediately unravelling every single movie special effect that has fooled my eyes, I now avoid certain 'making of' reveals. I want the creatures of The Mist and Monsters to continue to mystify me. I like to think of Teddy in A.I. as a character rather an effect, so I've avoided any behind-the-scenes footage or articles. I want to remember them the way they were in the story. Similarly, the final ethereal apparition in Quatermass and The Pit. I've no idea quite what I'm looking at - it might as well be real. I don't want to know how they did it - to me I'm looking at the thing from the pit. 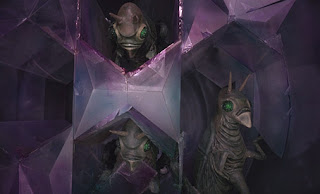 While it was regularly shown on late night TV throughout the seventies and eighties, Quatermass and the Pit gathered a growing hive of fans through the years and its continuing popularity has inspired well-produced editions on every home video format.

The new Blu-ray, from Optimum UK, looks superb - it's never looked so sharp, so clean and colourful. The aspect ratio refrains from cropping the original 1.66 image down to the standard Blu-ray 1.77:1 (16:9) shape. So with the 1.66 ratio, there are thin black 'pillars' at the sides of the image, but these might not even be visible on a screen set to 'overscan'. I'd have liked even a little more headroom, but this is the best aspect ratio presentation for the film that I've seen for many years. 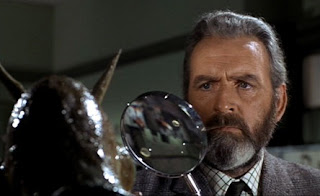 In the extras (only on the Blu-ray) there's sadly no archive footage behind the scenes, but there is a commentary track from the late writer Nigel Kneale and the late director Roy Ward Baker. Plus a group of insightful and often funny new reflections on the Quatermass phenomenon, with The Pit being everyone's favourite. There are valuable stories from Kneale's widow Judith Kerr, some set recollections from star Julian Glover (Colonel Breen), reminiscences from expert horror fans Kim Newman and Mark Gatiss, (who made me laugh out loud with their descriptions of Brian Donlevy's acting), Hammer expert Marcus Hearn and an American perspective from Joe Dante. The US didn't get the TV series so the name Quatermass didn't mean anything, so it was renamed Five Million Years to Earth (a title which I still confuse with Harryhausen's Twenty Million Miles to Earth). 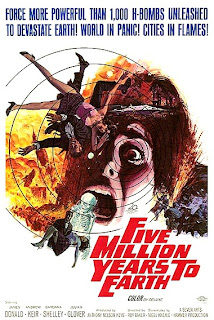 Several of the commentators tease the idea that Arthur C. Clarke's 1954 novel Childhood's End (to which I'd also add his 1951 short story The Sentinel) may have influenced this Quatermass story. There are several echoes and parallels between The Pit and 2001: A Space Odyssey, but as Newman observes, Kneale deals with the immense ideas a lot less pretentiously!

SPOILER-FRENZY: AVOID THE U.S. TRAILER IF YOU HAVEN'T SEEN THE FILM BEFORE! It's also included in the extras. 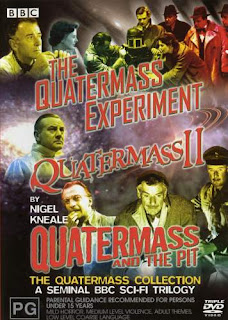 All six episodes of the original BBC TV series (from 1958) are also out on DVD - a low-budget TV production recorded as it went out live on air! The surviving episodes of The Quatermass Experiment and all of Quatermass II is also in this DVD set. The series expand on many of the ideas and scenes in the films. It maybe less distracting to read the TV scripts, which have also been re-published through the years (like the editions below). 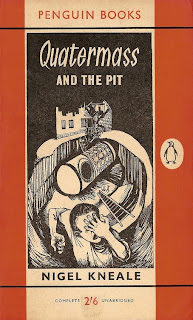 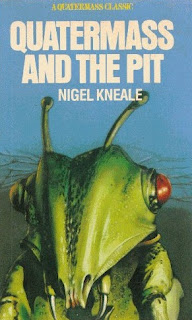 Tristram Cary's scary electronic soundtrack offered in many scenes instead of an orchestral score were released on a couple of CDs (the best is pictured below, and includes a couple of surviving tracks from the first two films). The haunting closing track provides a fantastic end to the story, but was in fact a library track. 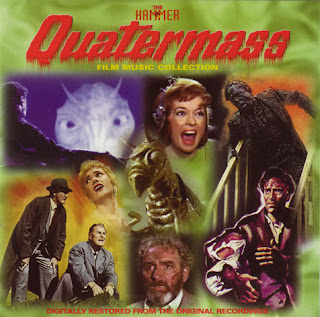 More great publicity photos and posters from the film are over at Coming Attractions Of The Past.