VIDEO NASTIES - THE DEFINITIVE GUIDE (2011) - when slashers were slashed 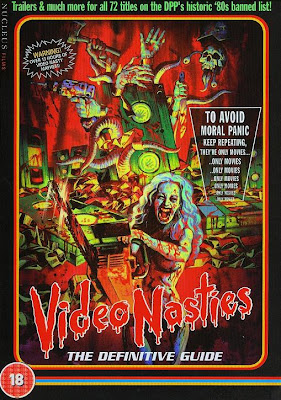 As you may have seen from the earlier post on my many encounters with Lucio Fulci's Zombie Flesh Eaters (1979), I survived being a horror fan in the era of the 'Video Nasty'.

But even after reading many articles and books on the phenomenon, this new documentary is the ideal guide to it all. Unpleasant memories, new revelations, expert reminiscences and a lot of laughs! This is all assuming you have a stomach for the excesses of 1970s and 1980s exploitation, which pushed the boundaries of taste as far as they could. It's fascinating to see which classics got sucked into the debate and what pushed society's buttons then, compared to now.

The documentary (72 minutes) on the first of three DVDs in the set, begins with the most outrageous, bloodiest montage I've ever seen. A joyous parade of the most notorious censored footage of the time, all in one glorious extended sequence, a celebration of most of it now being legally available. It's like one of those respectful sequences you get in Oscar ceremonies, but with boobs, blood and, ahem, swastikas.

The style settles down a little after that, and we're guided by many of the movie experts who were out there on the front line watching and writing. We also hear from new horror directors inspired by the era, and meet the defiant opponents of nastiness, concerned viewers who speak for the masses, film censors and even MPs involved at the time. Media professor Julian Petley emerges as an unlikely hero, bravely slating censorship in a TV debate at a time when newspapers were attacking video dealers with the same level of venom now reserved for child-murderers. A voice of reason then and now, he signals the more underhand aspects of the whole affair.

Today, talking about swearing, sex and zombies might seem silly in retrospect, but this was all taken very seriously, with hefty fines, imprisonment and press hysteria driving dozens of the named 'nasty' movies underground. The madness is described and illustrated, as well as the tortured and underhand passage of the law getting through Parliament. I'm of the opinion that government and press enjoy these issues that distract the public from more important and complex societal problems (war, unemployment, corruption). They can scapegoat something (video games are copping it at the moment), demonise it, then be seen to solve it. BAN IT! Once banned, many of the films weren't legally available for the next ten years or more.

Watching the whole story in one hit, I was appalled by the lack of research sought by Parliament ministers, the arbitrary application of the law and the carelessness with which it was passed. It occurred to me that this was an example of maybe how all laws in this country are slapped together. It also implies a wider question on what other information is censored.

But it's not nearly that heavy and mostly debauched fun, with dismay and shock at the ridiculousness of the phenomenon. Though these horror experts occasionally appear unable to defend the scenes of rape, evisceration, and zombie pest control in their entertainment, and rarely talk seriously about the relation to nastier subjects in the real world.

Movie censorship is now relatively relaxed, and modern horror has moved up a notch to challenge what's acceptable. This remains is a thorough guide to the excessive censorship of the 1980s, its specific obsessions, and the key exploitation hits of the era.

In the rush to prosecute, classics by George Romero, Tobe Hooper, Dario Argento, Lucio Fulci and Sam Raimi were also on the banned list. Completely obscure movies that were included got given a boost in notoriety. Kim Newman observes that the behind-the-scenes story of their censor cuts are often more interesting than some of the movies themselves.

I didn't enjoy the opening assassination of the VHS format, accompanied by a digital approximation of what faults looked like. I was surprised at director Neil Marshall (Dog Soldiers, The Descent) berating videotapes at such length. The many faults highlighted were mostly the results of bootlegging, caused by incompetent copying and tape damage. It's an outburst at odds with the rising current nostalgia for the format. Other horror directors like Chris Smith (Creep, Black Death) also remember the influence of these films on theirs.

Despite the controversies, writer and author Kim Newman always manages to find a humorous angle to the proceedings, keeping it in perspective. He's also far more enthusiastic about his favourites than fellow reviewer and Argento-biographer Alan Jones, who seems to assume that everyone's seen them all by now. Allan Bryce is similarly laidback but occasionally amusing, though I'm surprised he's actually involved here, considering the controversy that shut down publication of his magazine The Dark Side for six years.

My main quibble is that it's too short. I'd happily watch them all talk for longer, especially about something I've devoted so much time, money and energy on - collecting my favourite movies.
One aspect I'd like to have heard more about were the video covers. They briefly theorise that's why some films were banned (we aren't allowed to know the actual legal reasons for being on the list). But the covers were a key part of the problem and no-one mentions they ended up having to be approved as well as the content. If the sleeves had simply been cleaned up, more films might have escaped banishment. The industry even tried to pre-empt trouble by offering the famous double-sided insert sleeves for each video box, leaving the dealers the dilemma of which way to display each film. 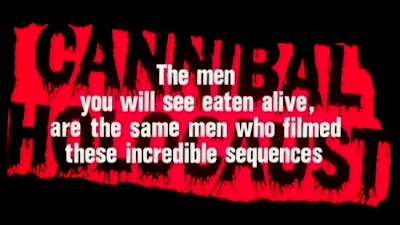 Discs 2 and 3 impressively collects a trailer for every last film that was on 'the list', together with an optional informed introduction from the experts who appear in the documentary. All lovingly presented in anamorphic 16:9, in line with the rest of the set. These two discs are much longer than the documentary itself.

The term 'video nasties' always made them sound like a tempting challenge. This lengthy experience helps sort out which were dull, unscary, zero-budget or genuinely tasteless. Do you really want to see that?

Hours of entertainment, a very adult Halloween party tape, a cautionary tale, and a great round-up of what to pursue and what to avoid with a wide bargepole.

Video Nasties - The Definitive Guide is on DVD in the UK, region 2 PAL.


An extended interview with director Jake West about the project, here on Cinemart.

Very thorough review of the boxset and its extra contents, here on DVD Outsider.

A brief review that lists all of the movie trailers in this collection, on MyReviewer.