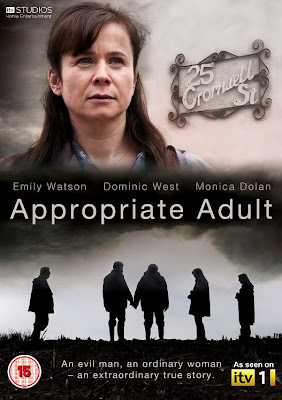 
A horrendous true story that keeps on getting worse...

The horrifying crimes of Fred and Rosemary West threatened to eclipse those of all previous British serial killers, with ghastly excesses that fuelled tabloid headlines for years. The Moors Murders, a couple that abducted and murdered children, still haunt England from the distant mists of the mid-1960s. These crimes at 25, Cromwell Street, uncovered in the mid-1990s, started with assault and murder in the family home...

The case set a new low benchmark for inhumanity reported in this country. Not in a war zone. Not on the other side of the world. But in an ordinary street, that could easily have been next door.

The idea of adapting the Wests' story as a TV drama, even fifteen years later, sounded impossible. The amount of sexual violence would be hard to work around on mainstream TV. 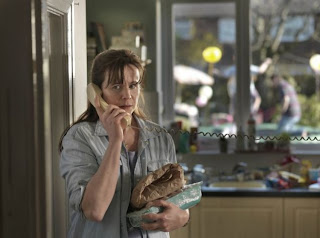 I wasn't even going to watch Appropriate Adult until it was announced that Dominic West, star of the acclaimed TV series The Wire, was to play Fred West. This indicated a more serious approach than a lurid reconstruction. For the actor, it was potentially a gamble to play one of the most hated men of recent years.

There's a huge disparity in taste between approaches to true crime on TV. I was surprised by an ITV documentary about the Moors Murders which suffered indifferent acting and poor taste crime recreations. Yet the Channel 4 drama Longford (2006) found an intriguing angle to dramatise part of the story, pitting Jim Broadbent (Brazil) as Lord Longford against Samantha Morton (A.I.) as Myra Hindley. But I wasn't expecting such an intelligent drama about Fred and Rosemary from the more mainstream ITV.

The script cleverly follows an appropriate adult, a civilian (Emily Watson) invited into the case when Fred is arrested to ensure he's being understood by the police, as he's suspected of being mentally vulnerable (there's irony for you). Each time they discover a crime has been committed, the more victims there turn out to be. Sitting in on police interviews with Fred West (Dominic West), she also accompanies him and the police in the hunt for where he might have hidden the bodies. Without his cooperation, there'll be no evidence. 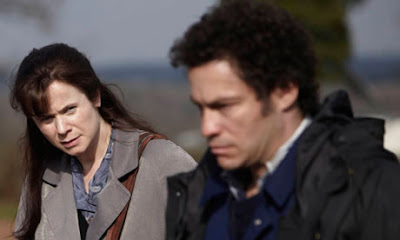 As an investigation, this isn't a barrage of flashy technology cracking the case, like in CSI. It's not built around violent flashbacks, like a horror film. We're simply faced with the suspect, trying to discover what and why he did. Is he as stupid as he looks? Is he lying? It starts with a missing person, but the more the police dig, the more crimes they unearth.

Emily Watson (soon to be seen in War Horse) is excellent as the 'appropriate adult' brought in without any preparation to hear West's interrogations and confessions. Unfortunately, Fred starts confiding in her, placing her in increasingly difficult quandaries. 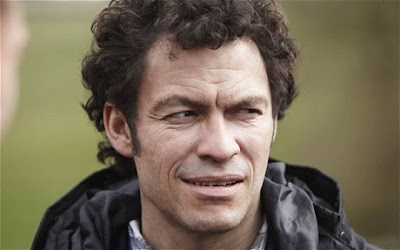 Dominic West is frighteningly convincing, all the more chilling because we're hearing some of the words and motivations of the original murderer in an eerie impersonation of him. The distinction between murders that he does or doesn't find upsetting, the casual way he admits to further crimes. Particularly chilling is the way the victims 'speak to him' as he gets closer to where they were buried. 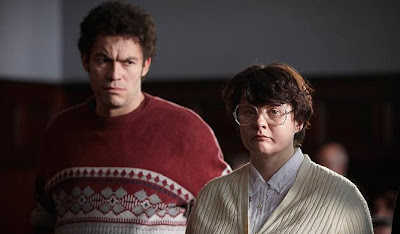 Rosemary West (Monica Dolan) is a frightening figure who's mostly in the background, with an unconcealed violent attitude towards everyone around her. In contrast, the calm and usually relaxed Fred insists she has nothing to do with all of it.

Shown as two feature-length parts, the first was very tight dramatically, showing the short claustrophobic period of his early interrogations. The second part was less satisfying, because it had to match real events, her sporadic involvement struggles to keep the viewpoint inside the investigation to the end.
The whole story can't be told as completely as a work of fiction would, because of the lack of evidence and the labyrinthine legal process. But I wish the programme had been a little clearer about how some of obstacles to the case had been overcome. 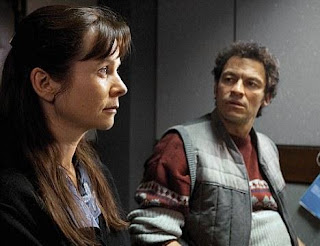 This serves as a restrained reminder of what this pair did, without showing the gory details. But also focuses on how hard it is to establish the truth, even with so much circumstantial evidence and the criminals in custody.


It's not just a situation where an ordinary person is in the same room with someone describing horror, but one where she gets the confidence of and insight into the mind of a psychotic multiple murderer. This took me as close as I wanted to get, and in as much detail as I could take. There are also hints that there were further, even nastier crimes...

It's available on region 2 DVD in the UK (pictured at the top).