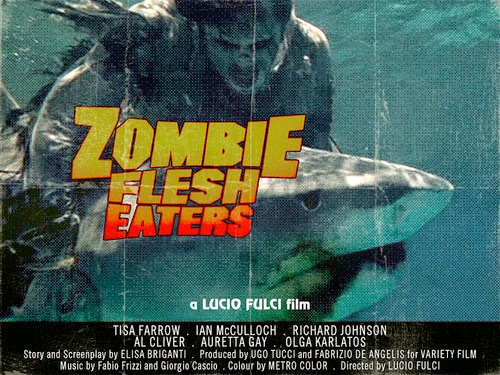 We are going to fleece you...

The awesome documentary Video Nasties: A Definitive Guide (2011) lives up to its name. But as I started to review it, I could only think of all the time and money I've spent on horror films over this period. For example, a case in point... 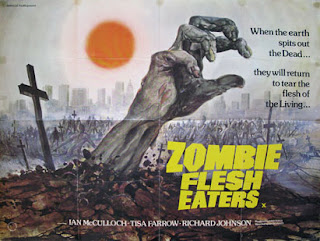 It's also called Zombie or Zombie 2, but I saw Lucio Fulci's first zombie epic as Zombie Flesh Eaters in 1979 in my local cinema in London's suburbia, four times in a fortnight. Despite being an 'X' certificate (no one under 18), it was censored for UK cinemas by over two minutes. The eye scene, the 'banquet' and all the throat-ripping was missing (and more).

Some cuts were fairly obvious: on film, the image runs in front of the lens at a different point from the audio pick-up. If a shot is cut from a print, the sound that is removed on that section doesn't exactly match the images that remain. You still hear part of the removed scene! A split-second of screams and gory sound effects would tip off the audience that something was missing. These faults could also be heard on the VHS release. 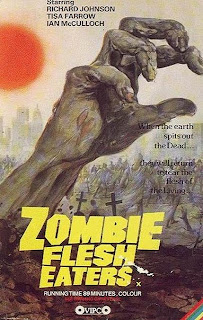 Yes, the next time I'd see Zombie Flesh Eaters was on an uncertificated VHS, rented from the local video shop. The first release (above, from 1980) was the same version that I'd seen in the cinema, though of course I'd hoped that it would be less cut. Once I knew a film was censored, I'd always hope that the next time it would be more complete. Maybe the next incarnation... 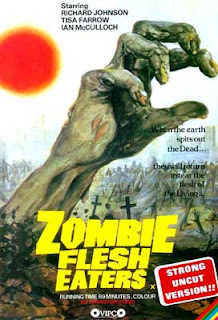 In 1981 there was a special 'strong uncut' edition. Another VHS rental (too expensive to buy), totally uncensored but still 'pan-and-scanned', cropped to 1.33 from 2.35 widescreen.

But then in 1983 the government banned the film altogether. "Video nasties" had been singled out, even though this film had been legally shown in the cinema. Now it couldn't be sold or rented any more, even if it was cut. At the same time, every movie in the UK would have to be checked by the censorship board for its home video release. Even the sleeve art had to be approved, by a separate organisation.

It would be ten more years before Zombie Flesh Eaters was again legally allowed on VHS in the UK. In the meantime, many of the banned copies that had been available in the video rental shops hit the black market at high prices - the only way to see it, unless you risked a bootlegged copy. If a VHS was copied down several generations, you'd maybe see what you were missing without seeing it too clearly. 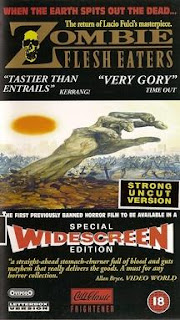 This widescreen version was released by Vipco in 1996. My first official copy, a 17-year wait. Not the three months you have to wait for a DVD. But now incomplete.

By this time, horror fans were looking abroad to countries where there was less censorship. American videotape was even poorer quality than the UK system, but laserdiscs offered better picture and sound, as well as widescreen. Zombie Flesh Eaters almost uncut, was available on this US laserdisc in 1998.

Fans would scour the world - finding which country had censored which scenes. US censorship was sometimes more, sometimes less than the UK cinema release. Japanese versions added subtitles, fuzzed out nudity but kept more gore. Take your pick. American laserdiscs were also about $30, Japanese at least double that. But an uncut bootleg VHS might cost just the same. 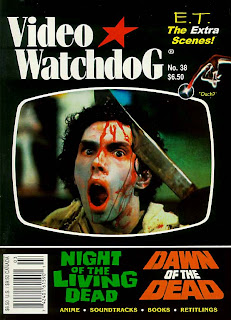 In this chaotic time (pre-internet) accurate information was scarce. One of the few guides to the many versions out there was Video Watchdog magazine. It saved me money because the obsessive writers had checked through everything. It cost me money by highlighting many wonderful and obscure horror films I'd not heard of. Video Watchdog became a bible for the next two decades. 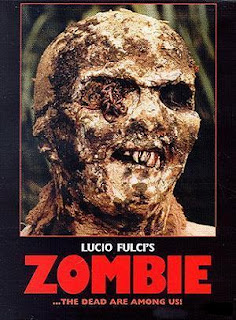 James Ferman, the head of the censorship board who'd presided over movie classification in the UK, passed over the reins in 1999. There was finally a change in attitude, an acceptance that the internet had raised the bar far higher than what was on home video. Finally, many of the video nasties could be released uncut on DVD (and of course then again as a special edition). I had my complete version of Zombie Flesh Eaters after a twenty-five year wait (on DVD in the US in 2004, 2005 in the UK). 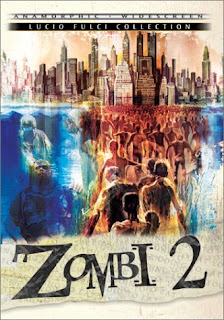 I'll soon get it on blu-ray, for the carefully restored version, in far better condition than the scratchy print I saw in the cinema. 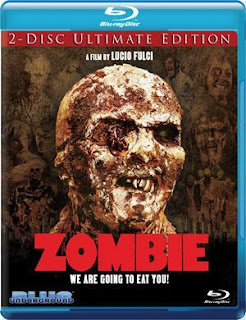 But this is just one horror film and all the versions that I can remember seeing and buying (yes, all of the above). All the while, taking seriously the many issues surrounding violence and sexualisation in movies, TV, and video games. The press and even the government have thrown a barrage of psychologists and urban myths to muddy the debates, even linking movies to murders. I've followed many of the arguments through the years, read way too much research, all to justify me seeing a bloody zombie movie!

While improved quality and DVD extras now entice us into buying duplicate editions of a movie, it was the censor cuts that fuelled most of my expensive 'double-dips' in a variety of formats. At least the trail of tape, laserdisc and DVD makes it easy to track the evolution of releases, a 'paper' trail that will soon be lost in the digital world.

TV showings are no longer archived, movies are streamed or downloaded. Working out which version of a classic film you own is going to be hard. Without packaging or release dates - how will you know you've got a director's cut or an original? Which is which, which was first, which is the best? 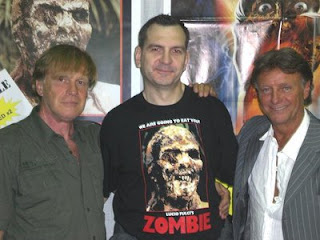 Thanks for all the hard work done by Melon Farmers, for tracking the many censored incarnations of, well, everything through the years. I'd never have remembered all those release dates.

Next up will be my actual review of Video Nasties: A Definitive Guide which got me into this rant in the first place. 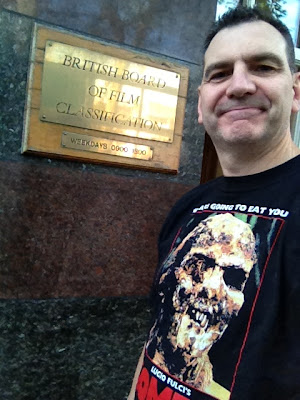