THE QUATERMASS CONCLUSION (1979) - a grim finale 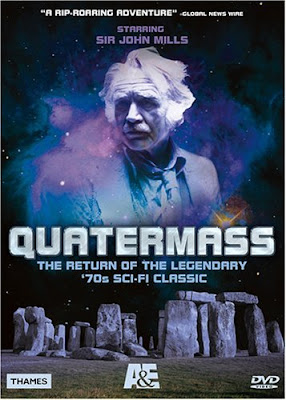 Creator Nigel Kneale's last series for his most famous character, Bernard Quatermass, presented the visionary rocket scientist as an old man simply obsessed with tracking down his lost granddaughter. There are two major obstacles: in near-future Britain, society has decayed into anarchy, and there's an alien force lurking in the sky that spirits away the young.

Watching this again I was shocked at just how cynically Kneale presented the future. Neither capitalism or communism has worked and society has descended into chaos, wreckage blocks the street, the elderly are hiding underground, goods and food can no longer be bought, only bartered or stolen. The streets aren't safe, unless you pay for protection from the 'cash cops'. 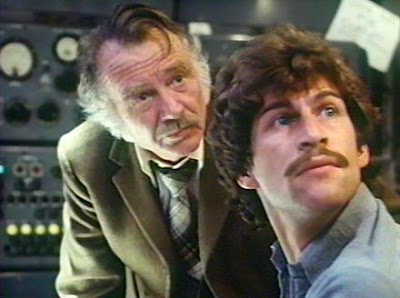 It struck more of a chord with me now than it did at the time. At the moment, it almost feels likely that this is how everything could go. With a little more more financial chaos, a few more ecological disasters, an escalation of tension between nuclear powers...

In retrospect, every earlier Quatermass story was also downbeat - The Quatermass Experiment was about the failure of his first space mission. Quatermass II presented an alien intelligence that could enslave humanity, infiltrating every level of society. In Quatermass and the Pit, an ancient intelligence reactivates mob rule and almost destroys London. Projects fail, things fall apart, the system is fallible, ordinary people die.

The Quatermass Conclusion shows humanity helpless in the cosmic scheme, by being regarded as little more than food by a new species from space. No chance of a friendly close encounter, we're nothing more than cattle. 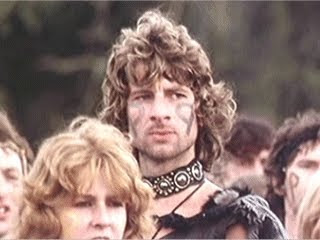 Kneale ironically mixes in a quasi-hippy movement of 'Planet People', who think that the huge crowds of people disappearing have in fact been taken away to a better place. This echoes the real-life cults that were hoping to jump into visiting UFOs and tour the galaxies.

The downbeat story reflected the punk nihilism of the time, though the story had been written years earlier. By 1979, regular strikes by electricity workers and dustmen meant power blackouts and huge piles of rubbish in central London were reminders of how quickly chaos could hit life at home and on the streets. 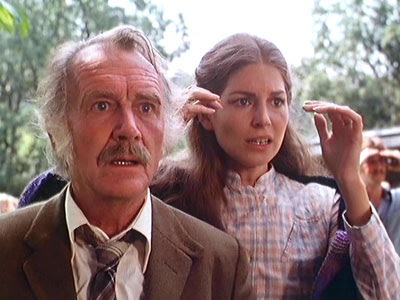 While the BBC had decided not to make this story, an early independent TV production company, Euston Films, rose to the occasion. They'd had success with the similarly cynical and violent cop show The Sweeney. While the three 1950s Quatermass series were shot in BBC studios, The Quatermass Conclusion was all shot on film, mostly on location, giving this series a completely different look from both the BBC productions and the Hammer films.

The crowd scenes and locations (including the old Wembley Stadium) were impressive for TV. But the modelwork used for the space scenes were pretty primitive, especially compared to the earlier Space: 1999. But the practical effects are still good, make-up and melted remains looking uncomfortably realistic. 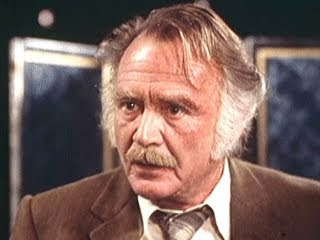 The cast is strong for TV, but some of the minor characters are more 'mixed ability'. Andrew Keir is my favourite of all the Professor Quatermass actors, but here John Mills is really very good, and the best thing in it. 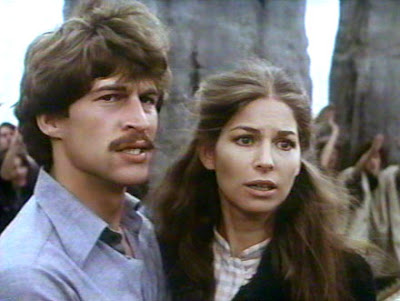 The late Simon MacCorkindale (Sword and the Sorceror, Manimal, Jaws 3D) plays a young radio astronomer. His wife is played by Barbara Kellerman (The Monster Club). One of their assistants is a fresh-faced Brenda Fricker (an Oscar winner for My Left Foot, followed up with, gulp, Home Alone 2).

Keep your eyes peeled for a pre-pop star Toyah Willcox, then courting a film career in similar counter-culture roles in Derek Jarman's Jubilee (1978) and The Tempest (1979). She was also in the excellent Quadrophenia the same year. The UK DVD release is currently out of print and going for high prices, so at present the US set (pictured at top) is more affordable, also offering a second disc with the theatrical version designed for a cinema release. Kneale had to write the series to work as two different narratives, so the film could work at half the running time. The US DVDs have minor conversion errors (PAL to NTSC) but still look as I remember it. The boxset is simply called Quatermass. The quote on the cover is misleading and stupid.