Ken Russell's THE DEVILS gets DVD special edition (next March) 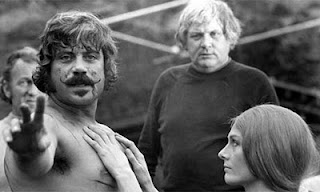 I actually never thought this was ever going to happen. Ken Russell's The Devils is coming to DVD in March 2012. (See the official BFI news item here).

Three years ago I wrote this article about The Devils (1971). After appearing on VHS in the UK (cropped and strangely squeezed to 1.33), there have been no other home video releases. Mark Kermode showed many of the controversial sequences on TV in a revelatory documentary that should have sparked a DVD release, the same way that his programme on The Exorcist inspired an expanded re-release in cinemas. But even after the news that Warner Brothers had remastered an uncut version of The Devils, it never arrived. It briefly surfaced for a couple of days on iTunes, which was presumably a mistake. 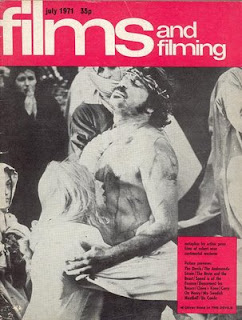 But now, after several screenings of the fully restored version in London, one with the director himself in attendance, it looks like the film will finally debut on DVD in the UK, released by the BFI. But they've also confirmed that the controversial 'rape of Christ' scene cannot be used because it hasn't been licenced to them by Warner Brothers.

The DVD special edition will instead feature the original 'X' certificate version released in UK cinemas back in 1971, as well as commentary and many extras featuring both the director and superfan Mark Kermode. The TV documentary 'Hell On Earth' presented by Mark Kermode could be included but will presumably lose it's glimpse of the missing scene as well. BFI haven't officially confirmed all the extra features as yet.

Despite this not being 'the director's cut' fans were hoping for, this is still a magnificent film, spectacular in scale, subject and bravado. If you thought the exorcism in The Exorcist was shocking (made two years later), you ain't seen nothing yet. Like Russell's biographies of classical composers, The Devils is an exaggerated version of actual events (based on the heavily researched book by Aldous Huxley).

Terrific news, but you'll have to be patient until March of next year. Until then, ignore any other DVDs for sale online, they're not official releases and some have been 'bumped up' from VHS.

Of course there's always the hope that if this sells well, Warner Brothers will relent and release the missing scene, which has already been digitally restored. At the moment there are no plans for a Blu-ray release either.

Thanks to Jonny Sambuca for getting my facts right! (Entry corrected on 16th November...)

Details of the DVD extras are here at the ZetaMinor forum.

My extended look at the movie The Devils is here.