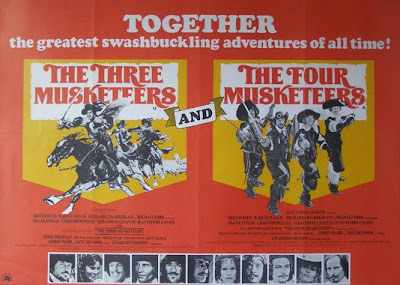 
Now that's what I call swashbuckling...

After many versions of Alexander Dumas' classic adventure The Three Musketeers, I'm only really impressed by this adaption that divided the story over two movies, Hobbit-style. The cast, comedy, adventure and quirky humour are somehow never at odds with the original story, using spectacular locations, lush cinematography, and historical accuracy. 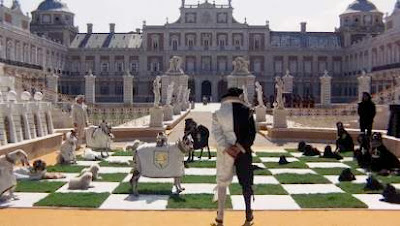 Dumas wove fact and fiction together around historical events and characters. This story makes the most of existing locations (mainly around Toledo in Spain) to evoke the period and settings of 17th century France and England. The director of photography is David Watkin who'd filmed The Devils two years earlier. I think Ken Russell's approach  informed the look, approach and even casting of the two musketeers films, which re-use Oliver Reed and Michael Gothard (also the vampire villain in Scream and Scream Again).

While the photography isn't as dark as the candlelit realism soon to be lavished on Kubrick's Barry Lyndon (1975), the lighting still evokes the period long before electricity, but with the slightly more romantic look of a Dutch master. Together with the astonishing costumes and palaces on display, this definitely deserves its new digitally restored Blu-ray release. The two films were popular hits perfect for the British summer school holidays of 1974 and 1975. 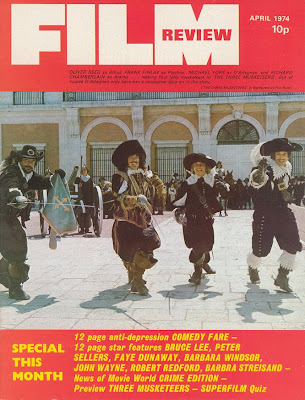 The movies raised a benchmark for realism by adding blood and exhaustion to the swordfights. Some are played for laughs, but you always know that the swords and sabres are deadly and that the bloody wounds hurt. Here, all the history is kept quirky because of the well-researched scriptwriter George MacDonald Fraser, author of the still-cherished Flashman books. (They too inspired a lavish location-rich movie starring Alan Bates and Malcolm McDowell, Royal Flash in 1975). Fraser also wrote a cutting book rounding up Hollywood's greatest historical inaccuracies.

The cast is an impressive mixture of European, British and American stars, but all convincingly cast. Watching it digitally for the first time, it was very apparent that the entire dialogue track had been re-recorded afterwards ('looped'). Even at the time, we could tell that some of the extras had had humorous dialogue added in later, such as the sedan chair carriers complaining about Faye Dunaway, ("She's put on weight..."), and passers-by commenting on Raquel Welch running around the streets in her nightgown at night, "Put some clothes on, you saucy bitch!". Also Jean-Pierre Cassel (actor Vincent Cassel's dad) as the confused French king, appears to be performing in English but sounds more like Richard Briers. 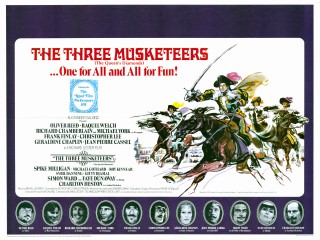 Producers, the Salkind Brothers, made news by filming The Three and The Four Musketeers back-to-back, with the cast under the impression it was one epic film. So despite the story being released as two movies, they'd only received one fee. Christopher Lee points out in The Authorised Screen History that the small print mentioned they were being paid for a 'project', not a movie. The producers tried the same manoeuvre five years later with the first two big-budget Superman movies. This time less successfully - director Richard Lester having to complete Superman II after the production lost actor Gene Hackman (a stand-in is used in many scenes) and director Richard Donner (who recently released his own more serious version).

The musketeers movies were apparently an easier coup, but listening carefully it sounds to me like the American cast didn't return to loop their characters' voices. Charlton Heston, Faye Dunaway, Raquel Welch and Geraldine Chaplin don't sound like themselves in The Four Musketeers. 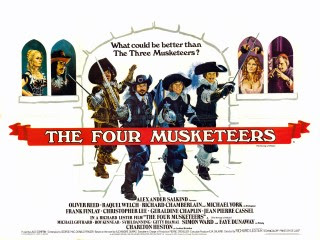 While Three is an outright funny adventure with almost non-stop action, Four has far more dramatic weight. No less brilliant, the many downbeat moments are worthy of any major historical drama of the time. While there's just as much action, I was initially disappointed (at the age of thirteen) that it wasn't as funny. But the shocks and dramatic turns still left a lasting impression. For both films to show such range, makes them all-round entertainment for all ages, without compromising on the source material or characterisations. 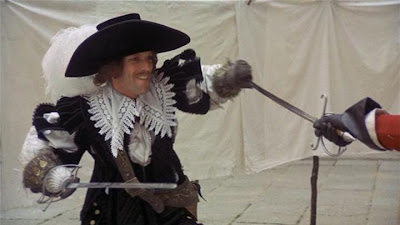 Each swordfight has a unique twist to keep them fresh, without being unbelievable. For example, set in a royal laundry, amongst a firework display, a convent, or even on ice, fight arranger William Hobbs choreographs it all impressively. He later worked on Ridley Scott's The Duellists, Flash Gordon, John Boorman's Excalibur and Terry Gilliam's Brazil among many others. He appears in the film and, like all the main cast, does his own swordfighting. He's best known to horror fans for the climactic duel in Captain Kronos - Vampire Hunter. Christopher Lee and Oliver Reed had previously crossed swords in Hammer Films' pirate and civil war swashbucklers. Good practice, but that didn't protect them both from suffering injuries, Reed even impaling his wrist on a blade. 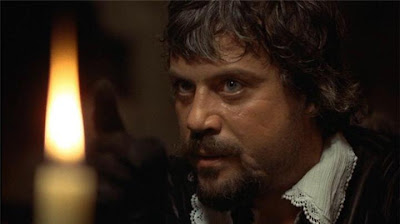 These are my favourite band of Musketeer actors. Michael York has never been less annoying and well cast as an over-enthusiastic, floundering upstart. Frank Finlay is excellent comedy relief, both physically and verbally, and rarely so well used despite the relatively small part. Richard Chamberlain is distinctive as an effete ladies' man. But Oliver Reed gets to deliver a sterling performance, somehow keeping his scenes deadly serious through most of the shenanigans, especially the heart-breaking showdowns in The Four Musketeers. 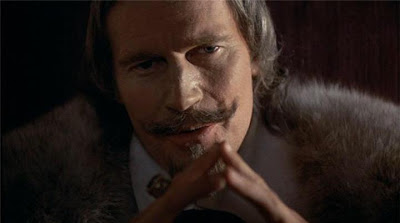 It's rewarding to see Charlton Heston back in period costume, effortlessly menacing as a behind-the-scenes villain, though still a fleshed-out character, Cardinal Richelieu. Note how aged he appears to be, knowing that this is inbetween his 'action man' roles of The Omega Man and Earthquake. 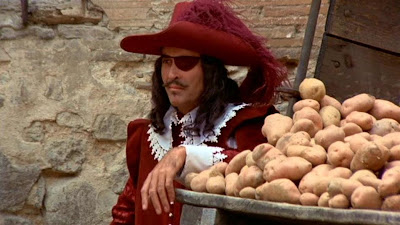 His brief sparrings with Christopher Lee are electric. An important role for Lee, as he tried hard to escape his Dracula typecasting, demonstrating he can act with the best of them, swordfight like a pro, and effortlessly play a drole, romantic baddie with Faye Dunaway as his lover. 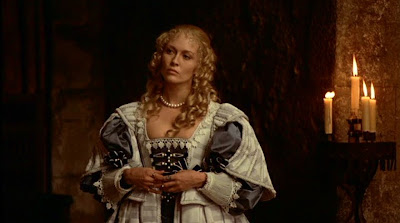 Dunaway is at the top of her game, underplaying the villainess Milady. While Richelieu is the mastermind, the head of church trying to depose the king, Lee and Dunaway's characters do the Cardinal's very dirty work. Her touching performance rounds out her character so much that it makes it hard to fully condemn her. Her very next film would be one of her greatest - Polanski's Chinatown.

Raquel Welch plays the pivotal role of Constance the Queen's dressmaker as an accident-prone simpleton so well, that I initially thought she was indeed a bimbo. After seeing more of her films, I learned she was not just voluptuous but an excellent comedy actress. In Britain she was seen as the sexiest of Hollywood female stars. As luck would have it, Hollywood were keen to make movies in the UK at the time, meaning Welch appeared in many British comedies at the time, spoofing her image of a sex goddess. Hence she played Lillian Lust in Bedazzled offering two lumps with a cup of tea to Dudley Moore, and whipping half-naked slave girls in The Magic Christian. 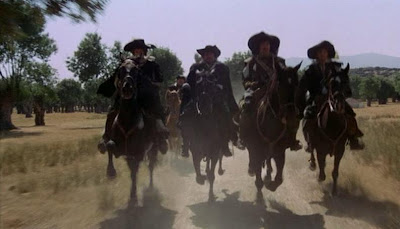 Roy Kinnear almost steals The Three Musketeers as the hapless, maltreated sidekick Planchet, the workhorse of the many musketeers, often getting the last laugh in the comedy scenes. One of the biggest laughs in the first film is his character failing to steer his galloping horse around a tree. Although the gag is done by a stuntman, it's now no longer funny knowing that Kinnear would die following a horse stunt during the filming of latter day sequel The Return of the Musketeers (1989), which reunited many of the cast and crew from these two films, and again directed by Lester. I've not been able to face watching it, knowing that it cost Kinnear his life.

Richard Lester re-used many more British comedy actors from his time with The Goons and from The Beatles' movies A Hard Day's Night and Help!, like Graham Stark and Bob Todd. But best of all, Goons' writer Spike Milligan shares scenes with Charlton Heston (!) and a bed with Raquel Welch, who plays his wife! That's funny in itself, but Spike builds up his scenes, as well as showing a flair for more serious acting.

While the first movie maybe tries a little too hard to milk amusement out of every last onscreen character, there's little else to fault in these two gems. 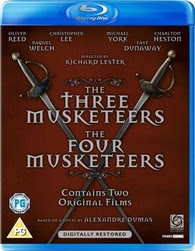 Optimum has released both remastered films for DVD and Blu-ray (the sleeve says region A and B compatible). They're available either separately or in double-disc sets. While there are no extras, I'm very happy that these are in circulation in such great presentations. The lush soundtracks, by Michel Legrand and Lalo Schifrin respectively are both on CD.