Flashback 1973 - FLESH FOR FRANKENSTEIN, last of the PLANET OF THE APES...


A further selection of cuttings from movie magazines of the 1970s...


Looking though these magazines, my favourite pictures have been the glimpses of directors on set with the cast, probably shot specifically for these monthly magazines. Here's John Hough and Pamela Franklin in Elstree Studios, on the set of The Legend of Hell House. Hough had directed Twins of Evil for Hammer Films, and was about to have an American adventure making the high-speed road movie Dirty Mary, Crazy Larry.

Here's how Hell House was promoted, just before its UK release later that year. I didn't get too many issues of Films Illustrated because it had fewer pages and not a lot of text! The cover price was also over twice the price of Film Review. The glossy paper and extra colour pages meant that I usually bought it for photo-spreads, such as this one.


Sean Connery attempted to smash his James Bond image almost as soon as he left the franchise after Diamonds Are Forever. In The Offence he plays an increasingly corrupt policeman trying to get an accused child-molester (Ian Bannen) to confess his crimes.


I like the idea that actors would drop in on each other's sets, during production. After A Clockwork Orange, Malcolm McDowell returned to director Lindsay Anderson for O Lucky Man! which formed the middle of an eventual trilogy started with if.... and ending with Britannia Hospital, all featuring recurring actors and characters.


Stanley Donen adapted the much-loved children's book The Little Prince, with actor/director/choreographer Bob Fosse (Cabaret, All That Jazz) playing The Snake. I was surprised to see Yvette Mimieux (The Time Machine) in this production photo, not realising she was Donen's wife.


The Day of the Jackal really only needed to announce the title on the poster, as it was already well known as a bestselling novel. Similarly, the public were already aware of what the story was about - an intricately realistic description of an assassination attempt on the life of the French President. 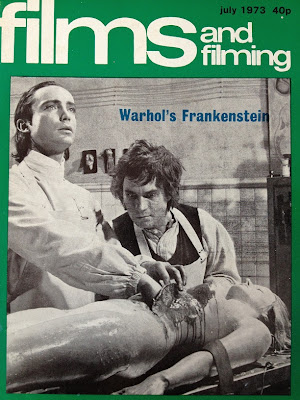 Meanwhile, Andy Warhol finally made an interesting movie, after the endless, literally navel-gazing arthouse, here's a bucket of gore with someone else directing - Paul Morrissey, who also made Blood For Dracula with much of the same cast. Films and Filming's affinity for front cover nudity was similarly unflinching when it came to blood. Luckily their covers weren't in colour any more, or there might have been more of a problem.

﻿
﻿Inside this issue, six pages of photos, with young Udo Kier as the Baron, and a fake head courtesy of Carlo Rambaldi, who'd soon be making aliens for Steven Spielberg and a full-size animatronic robot of King Kong. Flesh For Frankenstein was also filmed in a very effective 3-D process, later used for Friday The 13th - Part III.


This snippet of news announced a project that never happened. While a TV movie sequel was eventually made to Rosemary's Baby, it wasn't this incarnation put together by William Castle.


The last Planet of the Apes film, of the original cycle of five, premieres in the now-demolished Astoria cinema.


After the films, stories of the Apes were popular enough to move onto a TV series, a cartoon series and a comic book. This was a successful sci-fi franchise that pre-dated Star Wars. 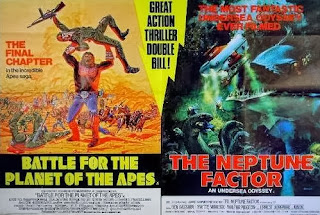 Battle for the Planet of the Apes was released in local cinemas on a double-bill with this deadly-slow underwater adventure The Neptune Factor. Thank you for that... 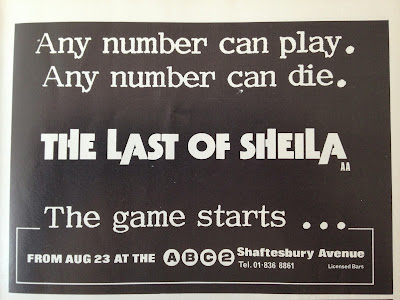 This cheap advert for the first UK run of The Last of Sheila fails to mention the superb cast, such as James Mason and Raquel Welch, rather underselling it.

Here's James Coburn getting made up for a disguise in The Last of Sheila. I don't remember him appearing in drag for any other movies.

Vincent Price and Peter Cushing pose for publicity photographs for what was eventually titled Madhouse. Based on a novel called Devilday, it was filmed as The Revenge of Dr Death.


Ever wondered why cult films failed at the cinema? As seen in the double-bill posters in my 1971 round-up, the support feature could be damaging to the fortunes of the main film.﻿ The sci-fi adventures of psychedelic anti-hero Jerry Cornelius, as directed by Robert 'Dr Phibes' Fuest seems completely at odds with Hong Kong period softcore.

Another lazy half-page advert, with the poster for Nicolas Roeg's now-classic Don't Look Now wedged in and surrounded by lurid, cut-and-paste review quotes, with a particularly crass take from The Sun.