Filming Location: THE INNOCENTS (1961) - not far from HELL HOUSE! 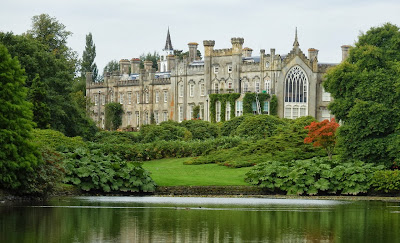 Yesterday, we went to look at the main location used for The Legend of Hell House. As it's only a few miles away from another famous horror film location, we did two locations in one trip. Again, Derek Pykett's guidebook, British Horror Film Locations, points to where the exteriors for Jack Clayton's The Innocents were filmed, over fifty years ago. Deborah Kerr starred in this classic, layered ghost story, enormously enhanced by cinematographer Freddie Francis. It's deservedly been restored and released on blu-ray by the BFI. 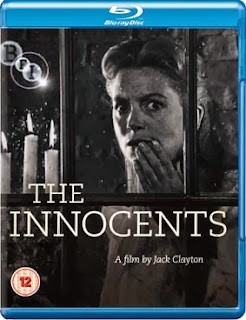 But once again, there are no more details in the guidebook. We'd no clues how to find specific scenes and camera angles. Like many movie location guides, an address is only the beginning of some amateur, nerdy detective work.

As usual, I'd prepared badly and not seen the film recently. Instead I'd found some key screengrabs online of scenes that looked like they might still be recognisable (visible parts of buildings or landscape that might still exist) and in particular the haunting shot of the shadowy figure in the reeds - a shot that really frightened me and I've always wanted to see for real. Easier said than done...

The exteriors of The Innocents were shot at Sheffield Park and Garden, a huge National Trust site nowhere near Sheffield! It's actually in East Sussex just off the A23, a few miles outside of Brighton, and only a few miles east of 'Hell House'. 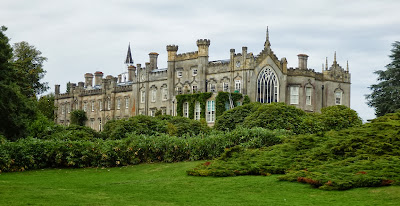 Like the Hell House location, this mansion is now a private residence, but there's a great view of the front from inside Sheffield Park Garden. Near the entrance to the garden (there's an admission fee of £8.50 unless you're a National Trust or Royal Horticultural Society member) is the best view that the public can get of this huge house.

But looking at online photos of the house, the terrace - where key scenes of the story take place - appears to be a studio set (or a different location?). From other photos online, and the aerial views, there doesn't appear to be a paved terrace on either side of the mansion. Not any more, anyway.

Looking closer, I was keen to find this turret, where the shadow of Quint appears. But compared to this screengrab, the stonework matches but I couldn't find a close match - again this could have been faked (perhaps the corner has been faked with a matte painting?). 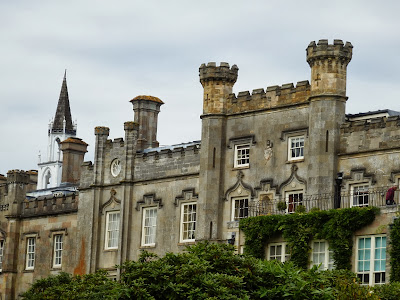 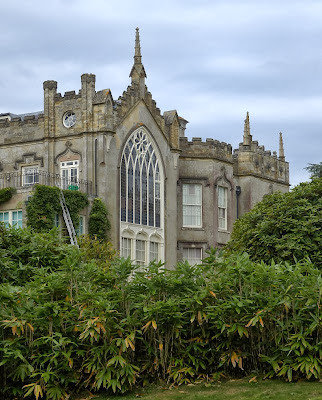 I took these two close-ups to try and find a match for that turret, but there's apparently no corner like it.


We had more luck as we walked round the gardens, and the staff also gave us some useful pointers as to where to look. Sheffield Park is huge, but the carefully landscaped garden is a manageable stroll.

The house can be seen, on this aerial view from Google Maps, at top left (with the circular drive above it). The garden entrance is just below the main house. The ornamental gardens enclose four huge artificially-made ponds, each constructed at a different water level, a cascade feature leading from one pond to another, each cascade with an ornamental bridge. 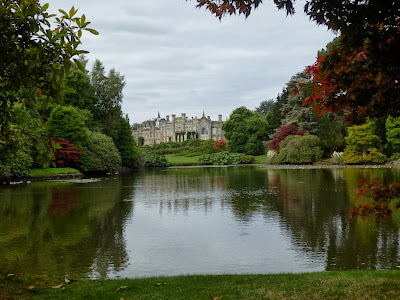 The first bridge is where you get this grand view of the mansion looking across 'Ten Foot Pond'. 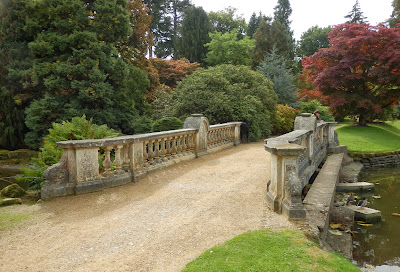 Here's a photo of the high side of the first bridge, also called Top Bridge. Note that it's made entirely of stonework...

The gazebo (at right) was probably only put there for the film but, incredibly, there are still palm trees (behind Deborah Kerr, far left) at a similar spot in the gardens. 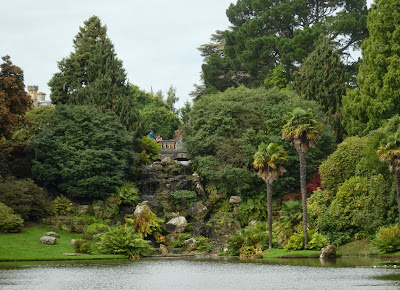 On the lower side of the stone 'Top Bridge' is Pelham Falls, usually a grand water feature, but not operational on this day. But here too are two palm trees, on the right. We took another shot (below) from the clearing seen (above) on the left. 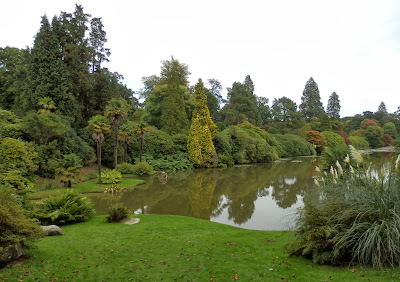 At the base of Pelham Falls - this angle is taken from the grass clearing to the left of the stone bridge. The grass slopes down steeply towards the water, matching the high camera angle in the gazebo shot. I believe this clearing is where they shot that gazebo scene, with those palm trees in the background.

A distant figure, dressed in black, standing amongst the reeds. This was the scene I really wanted to find. But water, reeds and trees can change totally over fifty years. The only real clue was that bridge...

This was the toughest, but most satisfying find of the day, but only when I got home and looked at all our photos again! I'd used this screengrab (above), viewed on an iPhone, to guide me to find this specific angle of a bridge. But in Sheffield Garden there are three bridges to investigate, each could have been filmed from either side...

Assuming that that bridge hadn't been completely rebuilt since 1961, which is a fairly big assumption, Top Bridge was first eliminated because it was made of stone and didn't have iron work railings. 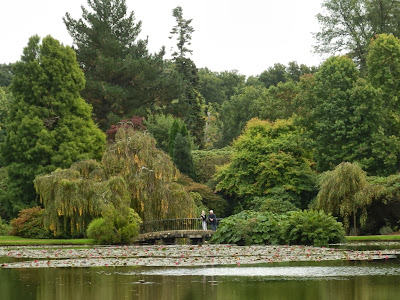 This second bridge, referred to as Middle Bridge, has iron railings. It joins Middle Lake to the huge, split 'Woman's Way' pond at the east of the garden. 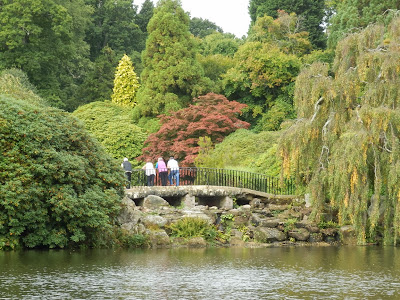 I shot the Middle Bridge from both sides, note the drop in water level on this 'backside' view (above). This was a possible match because of the size of the bridge and the background of trees. But the railing work didn't match, and the stone base of the bridge is quite flat. In the screengrab the base is arched more. It had possibly been rebuilt, but otherwise still not a definite match. 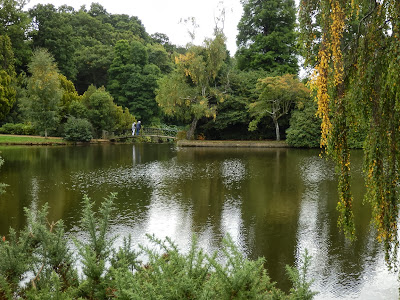 The third bridge, 'Cascade Bridge' joins Upper and Lower Woman's Way Pond (see the map). I'd decided that the shape of the bridge looked the most likely and had been shot somewhere from this side, from the west shore of Upper Woman's Way Pond, somewhere behind a small covered bench called the 'Summer House'. This theory was despite the fact that the bridge railings were vertical, whereas the screengrab shows a crossgate pattern. 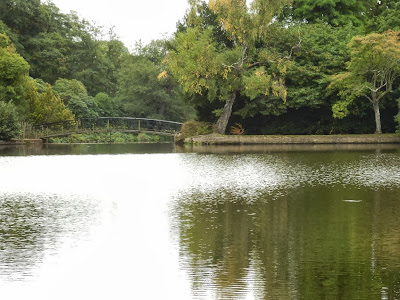 I took this zoomed-in shot to try and approximate how the scene might have been framed, imagining reeds in the foreground. But, once we got home, I found that I'd got it wrong. 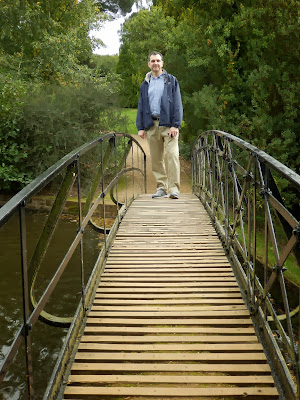 Here's me on Cascade Bridge, blissfully unaware that on one side there are vertical railings, but on the other side there's a cross gate pattern! I'd also not looked at the screengrab close enough. The figure in black is stood up above the water level (rather eerily), her head is level with the base of the bridge. This indicates that she was filmed from the lower pond. I think there's also a glimpse of the stone cascade to the left of the reed bed. I'd taken dozens of photos of the wrong side of the bridge! 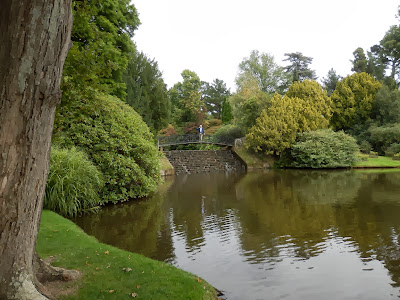 Luckily, we'd also photographed the Lower side of Cascade Bridge. It's from the wrong angle (left, not right) but the other bank isn't accessible, and it also looks like they might have filmed it from the centre of the lake! 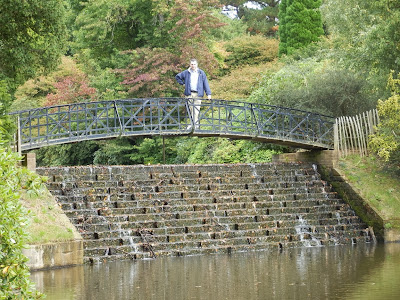 Therefore, I'd nominate Cascade Bridge as being in that spooky scene from The Innocents, filmed from Lower Woman's Way Pond. If you can shoot a better match, please share it with us!

Lastly, Cascade Bridge is actually supposed to be haunted. Before the bridge was built, a headless woman was said to walk across the cascade (presumably giving the ponds the name 'Woman's Way')... 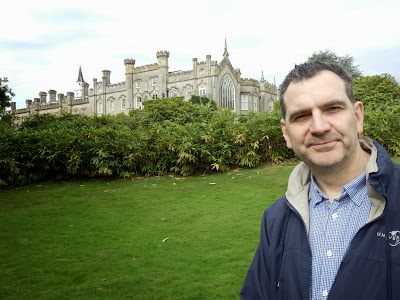 Another mystery ticked off the list, but we still haven't visited The Texas Chain Saw Massacre steak house...

Visitors' information for The National Trust site for Sheffield Park House and Garden.

Once again, thanks to my husband, David, for the additional photography and for driving me into horror movie territory. Again. Thankfully cream teas were available and there weren't any coach parties in town.