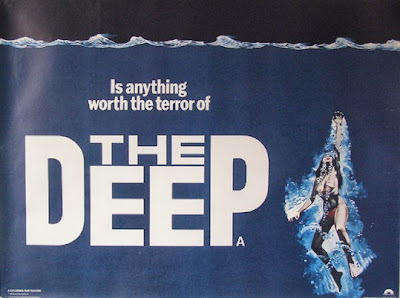 Expectations of Jaws, but still a thriller

Peter Benchley's next novel after Jaws was, shall we say, keenly anticipated by film studios. Before it had even been completed, the story was up for sale to the highest bidder. Having written the novel, Benchley then had to cut it down and around, into a filmable, cinematic screenplay. 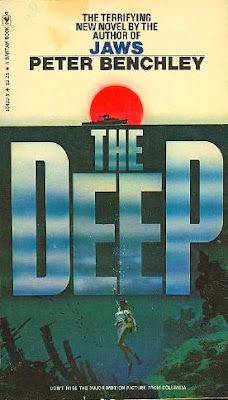 I didn't read it, to avoid spoiling the story, hoping that it was going to be another Jaws-strength movie experience. The Deep was sold to remind everyone of its links with Jaws, misleading the potential audience. The poster is a clever reversal of the Jaws poster (but also far less sensational) with female swimmer now under the surface. Was The Deep going to be a sequel to Jaws? I didn't even know the answer to that when I first sat down to see The Deep at the cinema... 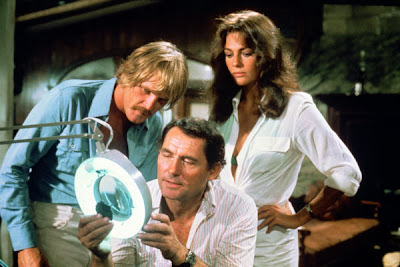 A young couple, David and Gale (Nick Nolte and Jacqueline Bisset) go treasure-hunting among the sunken shipwrecks off the Caribbean island of Bermuda. The strange objects they find are of interest to a local historian (Robert Shaw) as well as a local gang of criminals. Gail also nearly gets her arm pulled off by something living in the wreck...

Earlier underwater thrillers often failed to excite because the action was forced into slow-motion. The Deep succeeds by building on the ever-present dependency on air, as well as maximising and varying the potential threats - like predators and airless claustrophobia. Director Peter Yates (Bullitt) adds memorable action scenes above the surface as well. In particular, a fight among the workings of this cliff-face lift.

But the action never becomes as ridiculous as James Bond or as OTT explosive action as Into The Blue (2009), which begins with a very similar premise. The Deep is a more realistic thriller where the story and the action are within the realms of 'this could happen to you' rather than escapist impossibility.

In the cinema in 1977, while I was hoping for more Jaws, and while there is in fact some hazardous shark action, I was disappointed that they weren't more central to the story. But I should have ignored the Jaws connections and enjoyed it as an unusual, authentic-looking, mystery thriller. The Deep was the best underwater action film I'd seen since Thunderball.

Watching it again on blu-ray, I really enjoyed that the action was happening for real. Of course trickery was used, including a few (very few) optical composites that tie-in the divers' location in relation to a huge model of the shipwreck. But so much of the excitement is seeing that the actors and stunt performers aren't faking.

Underwater, the cast (and the crew) had to learn to dive, initially for filming around an actual wreck off Bermuda. Of course stunt-doubles were used for more dangerous action - and there's plenty of that, especially when angry sharks get tangled in their air hoses...

For the tighter, more complex underwater locations, a huge underwater saltwater set was built in Bermuda, and populated with the local wildlife. A huge, expensive solution that enabled the production to alternate filming between the sea and the set of the wreck, all in the same location. Existing water tanks at the film studios (the only other option) couldn't have been as deep or able to sustain any authentic sea life. This is detailed in the 'making of' book, written by producer, Peter Guber. 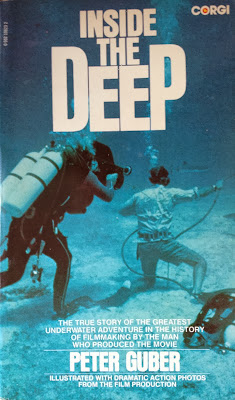 Tony Masters, a production designer who'd previously worked for Stanley Kubrick on 2001: A Space Odyssey, (and subsequently worked on the huge production of Dune) suggested and succeeded in building the gigantic multi-level set in a specially dug crater. 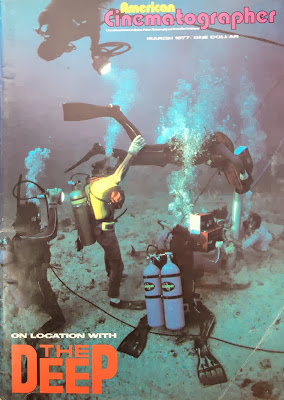 For the tight confines of the story, The Deep also necessitated the design and rapid manufacture of new underwater 35mm cameras. The only existing type was far too bulky. Underwater cinematography experts Al Giddings (The Spy Who Loved Me, Omen II, For Your Eyes Only) and Stan Waterman (Blue Water, White Death) helped sort out what was possible and shot second unit for the film. This March 1977 issue of American Cinematographer has several well-illustrated articles about the achievements of this complex production.

James Cameron must have studied the making of The Deep when he was preparing for The Abyss, because it was the only comparable use of such a large underwater set. Cameron then built huge, more complex sets in the bottom half of a nuclear reactor dome (that had never been used). Naturally, he hired Al Giddings to help shoot the underwater scenes for The Abyss and Titanic. 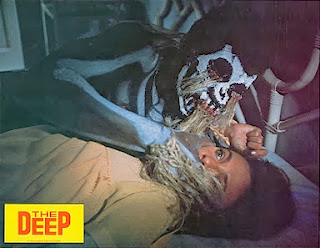 There's some brutal action, nail-biting fights and violence that pushed the limit of the film's 'A' classification. Particularly nasty is the repeated victimisation of Bisset's character, one scene was regularly cut out altogether from TV showings, when she is terrorised by voodoo intruders. The baddies are also keen to see her naked, as are the film-makers - her first diving scene is in a wet t-shirt.

Jacqueline Bisset (Airport, The Mephisto Waltz) was reportedly outraged when newspapers published a photo of her fresh out of the water wearing her famous t-shirt, though they were quick to point out that that's also how she appears in the film. The publicity was good for the film, at her expense. Despite everything, her character is strong and integral to the story, and Bisset gives one of her best performances. She'd previously worked with director Peter Yates on Bullitt. 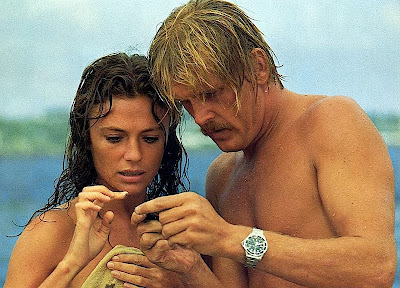 Nick Nolte (Cape Fear, 48 Hrs.) was newer to the big screen (Bisset insisted on top billing) and was a sexy new star hot off the recent TV hit mini-series Rich Man Poor Man. The Deep launched him into A-list movies.

Robert Shaw provides the other strong link to Jaws, but opts for a very different character from Quint (though his character could easily have been a relative). Shaw is excellent, as usual, quietly defining every one of his scenes. I find it astonishing that he did so much diving for this, along with the others. He would then die of a heart attack the year after The Deep was released, at the age of 51.

While Shaw anchors the film (sorry), he doesn't dominate it, among a strong cast. He's alongside Lou Gosset Jr. (Enemy Mine, Jaws 3-D) as the single-minded Cloche. This must have been one of the last thrillers where the bad guys are all black, and there's no token black good guy. In 'Inside The Deep', the producer's reasoning is that one of the baddest bad guys in the story, is white...


Shaw's sidekick is actor/stuntman Robert Tessier (Hooper, Starcrash, The Sword and the Sorcerer), who I initially didn't recognise because of his silver crown of hair (he normally appeared totally bald). Lastly but not leastly, a seedy local 'sea dog' with valuable knowledge of the wreck is played effortlessly by Eli Wallach (The Magnificent Seven, The Good The Bad and The Ugly). 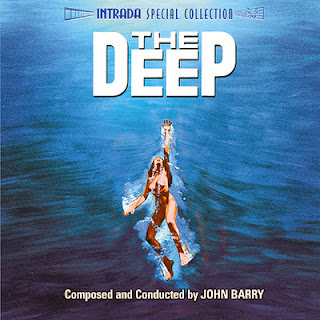 A wonderful soundtrack by John Barry completes the experience. The original vinyl release was source pop (like the pornographic Donna Summer song, Down Deep Inside) on one side, and a single track on the other, mashing all the movie cues together. Thankfully a more thorough, expanded CD has now emerged (sorry) released by Intrada. 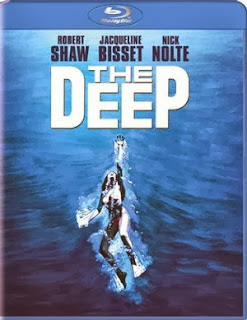 After various murky incarnations on home video, the blu-ray presentation is easily the clearest presentation. It includes a documentary and the deleted scenes that were thrown back in for its US TV debut. These include an expensive discarded prologue, a storm sequence with Shaw and Wallach's characters as young men (played by the actors' sons).

While it's not a shark-hunt, its credentials are authentically 'Jaws-era' and moire creative than most Jaws successors. The Deep remains as tough as modern action thrillers, while not as far-fetched or lightning-paced. The trials of Jacqueline Bisset's character could only appear in a horror film now.

The lack of technology on display keeps the movie fairly timeless (unless you know what Nick Nolte looks like now). But The Deep has the edge of not having its thrills diluted by CGI sea creatures, green-screen or even split-screen. What you see is what once actually happened.