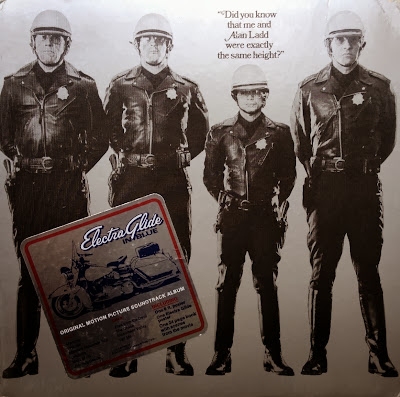 Electra Glide in Blue is the flipside of Easy Rider. A twisty noir mystery in the desert sunshine. The iconic Harley-Davidson police motorbikes parallel the choppers of Easy Rider, with John Wintergreen (Robert Blake) as a thoughtful, sympathetic law enforcer, contrasting the very negative image of the police force at the time. His solo investigation into a local suicide pits him against the detectives assigned to the case... But the story takes a backseat to the characters and this spectacular location - the widescreen cinematography of Conrad Hall places these modern cowboys in the desert around Monument Valley.

But for years, my experience of the film was simply the soundtrack album and its superb packaging. Don't get me wrong, I don't buy films and albums to get free gifts and posters (very often), but as a teenager looking through an Our Price record sale, I couldn't pass this up. Half price at only £2, this baby was heavy! The shiny silver sticker on the cover (above) listed a booklet and two posters. I'd not seen the film, nor heard the music, but I was very much into posters...

With dialogue from the film between the music tracks, the soundtrack album also tells (and spoils) the story of the film. It would be years before I first saw it on late night TV, but through the album I already appreciated it. I wouldn't know, until recently seeing the 'making of' documentary on DVD, that the director was already big in the music business. He knew how to make the album just as special.

The cover folds out like a double-album, though it only includes one vinyl disc. This image may be familiar to fans of the long-running Hill Street Blues TV series (1981-1987). Captain Frank Furillo (Daniel J. Travanti) has it hanging on his office wall!

Inside, the album sleeve folds out to reveal this large vertical image (above). 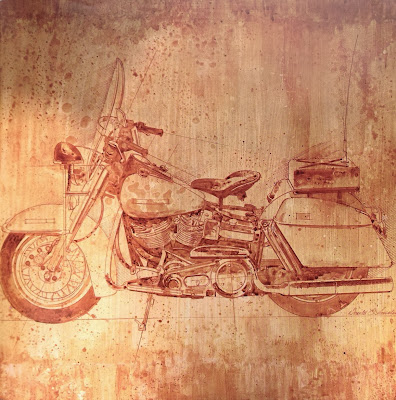 Inside, the image on the cover of the 12x12 inch colour booklet (above) is also used on the record insert sleeve - a sepia-washed, painting of the Electra Glide Harley-Davidson motorbike on thick glossy paper. 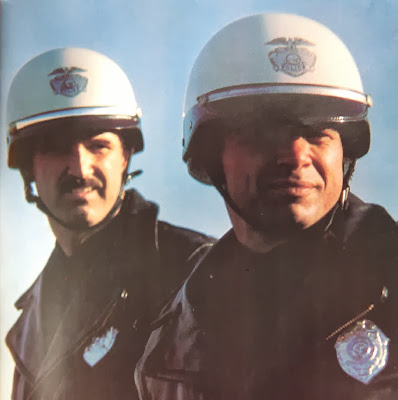 The booklet is full of glossy colour publicity photos from the film, many of them full-page, with very little text. 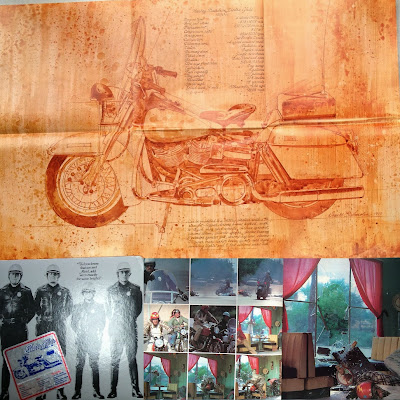 One of the posters folds out to six times the size of the album, again of the painting, but with added lists of handwritten technical details about the bike. For scale, here's a shot of the poster (above) over the album cover and the open booklet. 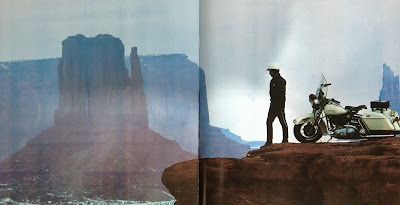 But I can't find the other poster - been looking for months. It was ridiculously huge and subsequently printed on thinner paper. Folded up, it was smaller than 12x12 inches, but unfolded to 12 or more times the size. It was a single photo of a motorbike and rider on the edge of this valley. The image could have been a wider version of the one above (the centrefold of the booklet), shot during the filming of this scene from the film (below). It was a very, very long poster.

Because I put this poster up on the wall a couple of times (using blu-tac to fix it), it became stained and was badly ripped when I was taking it down once. It may have become so tatty that I threw it out (would I really do that?), but I'm hoping it's still rolled up somewhere.

As a purchase, it's the most impressive record album packaging I own. As for the music, the mix of folk rock and jazz didn't appeal mostly, but I used to listen to it to try and match up the dialogue with the photos in the booklet. The last track, 'Tell Me', the closing track to the film, is my favourite. It meant much more once I'd finally seen Electra Glide In Blue.

(All images are deliberately imperfect, handheld photographs, rather than scans, in an attempt to prevent them from being resold as images on coffee mugs...) 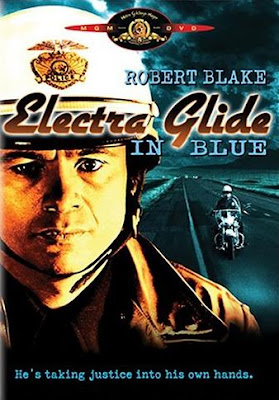 John Wintergreen is a short motorbike cop and lives in a spectacular middle-of-nowhere town but yearns to be a big city detective. He decides to investigate a case of his own, when completely disagreeing with the detective in charge. His normal patrols on the road keep pitting him against young people living locally in the desert, or passing through. While his partner wants to rough them up and bust them for drugs, Wintergreen apologises and tries to make amends.

Electra Glide In Blue wants to show a different angle of the police, but flips the opposing sides of Easy Rider so that now the various young hippies are barely represented as characters, and often negatively.

Wintergreen's quest to be a better policeman is also an unlikely portrayal, initially shown as a by-the-book rookie, suddenly gathering his wits, with no interim journey. The clash of characters is well-played, as is the theme of small town dreams and their destruction. A high speed motorbike chase comes out of nowhere, adding a misleading pace to the trailer. But the action is well-staged, reminding me of some of the slow-motion mayhem in Mad Max (1979).

It works best as a movie played at midnight - great to look at, occasionally fraught and violent, but an easy-going story.

I always think that the film inspired the successful TV series CHiPs (1977-1983), also centred on motorcycle patrols and the exciting, glamorous image of the uniform and machine. 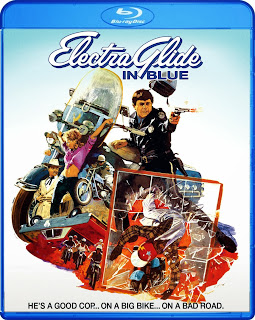 I watched the DVD (don't look at the director's introduction if you've not seen the film before - because of spoilers). There's also an interesting documentary, with director James William Guercio pointing out that you can clearly spot a young Nick Nolte among the hippies!

Another view on Electra Glide in Blue from Rupert Pupkin speaks!