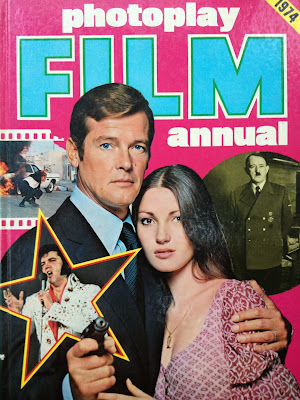 Every Christmas, the Photoplay Film Annual would summarise the highlights of the year and preview a few productions on the way. Often with half-a-dozen, full-page, glossy portraits of the stars (usually, Burt Reynolds with his shirt open...)


Hitler: The Last Ten Days was one of several films about Hitler's hibernation in the heavily-fortified bunker, definitively portrayed in Downfall (2004), though this version covers many of the same events.


Full-page portrait of the late Jon Finch as Jerry Cornelius, from Robert Fuest's The Final Programme (which has only just debuted on DVD in the UK). Renamed as The Last Days of Man on Earth for the USA, it's strange that it's in the annual at all, after a low-key release. This photo shows Cornelius' needle-gun, used in the film.

A look at The Final Programme and the many other wonders directed by Robert Fuest, here. 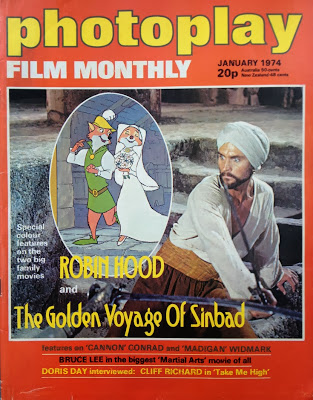 The Golden Voyage of Sinbad, starring John Phillip Law and Caroline Munro, was a big hit for Ray Harryhausen as he resurrected his Arabian Nights' stories for two further films. Until Star Wars came along, Ray's special effects were the high point for what was possible with fantastic, as in fantasy, creatures.


For me, The Golden Voyage of Sinbad had a stronger story and cast than many of his adventures, with a superb range of different 'monsters' on show. The key gimmick of the decade was to ensure there was plenty of sweaty cleavage in childrens' fantasy films. See also Sinbad and the Eye of the Tiger, At The Earth's Core, People That Time Forgot, Warlords of Atlantis...

Warhol's Dracula and Frankenstein were popular examples of stealth Euro-horror, with European actors talking in cracked English or completely dubbed into English. Joe Dallesandro was the only visual evidence of any Warhol connection, having starred in Heat, Trash and Flesh. But Udo Kier is the real star of both films, with uniquely over-the-top performances, at once horrific, tragic and self-parodying.

Films and Filming magazine championed movies that they knew were going to be controversial, giving them far more than usual coverage, while they only received scant, toned-down mentions in other movie magazines. As with A Clockwork Orange and The Rocky Horror Picture Show, they'd devote up to six full pages of nothing but publicity photographs. 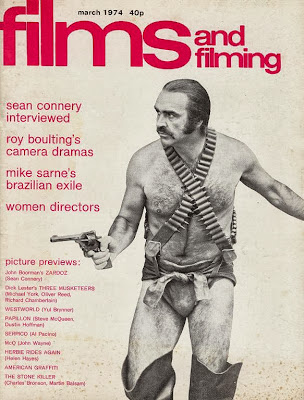 Zardoz was certainly different, and at the time, mostly taken seriously as a science-fiction parable. Decades later, it's still a muddle, best known for the unusual costumes of Sean Connery.

A further, longer look at Zardoz on DVD, here.

Here's writer/director John Boorman, with Charlotte Rampling and Sean Connery. Boorman has since admitted that Zardoz might work better as a novel. So, maybe just try his novelisation instead?

Young novelist Michael Crichton wrote and directed Westworld, an imaginative prediction of an adult theme park, where anyone (who could afford it) could live out fantasies of heroic brutality and easy sex, (all done with androids). The film beat The Stepford Wives to the big screen and inspired fem-bots on the small screen.

A further look at Westworld here. 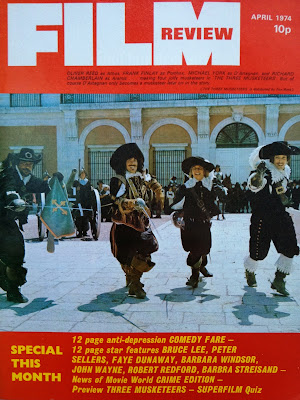 The huge production of The Three Musketeers was split into two big summer films, with The Four Musketeers following in 1975. Despite the producers being sued for only paying their stars for one, not two films, they tried repeating this trick with Superman - The Movie a few years later (but ran into far more trouble with the stars and director, Richard Donner).

More about this version of The Three Musketeers here.

The final few Hammer horror films were still being made, but surely pairing them up with kung-fu films wasn't helping their success. 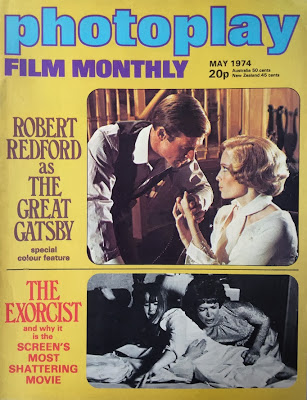 Decisions, decisions. Who to have on the front cover? Robert Redford as The Great Gatsby, or runaway satanic hit The Exorcist?

Forewarned by the reaction in America, the British press was already warning the public of the approaching horror film depicting a foul-mouthed thirteen year-old possessed by a demon. This article plays Devil's advocate by describing the 'sickening' movie, at the same time as describing all the ground-breaking, forbidden stuff that happens in it.

In this issue, there's also an interview with Linda Blair, to reassure us all that she's not been freaked out by her experiences on The Exorcist.


A few months later, The Exorcist opens in the UK, with this exceptionally sparse, full-page announcement. 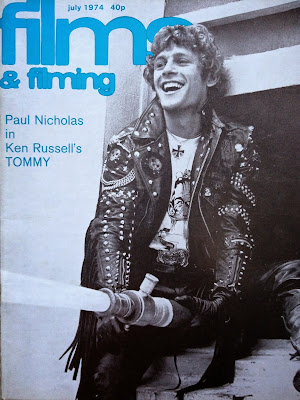 Ken Russell's Tommy was his most successful film. Having visualised the music of many classical composers, Russell was unafraid of doing the same for an entire 'concept' double-album of new music by The Who. Before 'pop videos' existed, Russell made one, movie-length. The entire album was also re-recorded so that the actors and guest singers could perform their own versions of the songs.


Tommy was also the start of an acting career for lead singer of The Who, Roger Daltrey.

The birth of Australian cinema was a two-pronged success, with unique arthouse films from the likes of Peter Weir (The Cars Who Ate Paris (above) and Picnic At Hanging Rock) as well as exploitation comedies like The Adventures of Barry McKenzie and the action-heavy madness described in documentary Not Quite Hollywood. 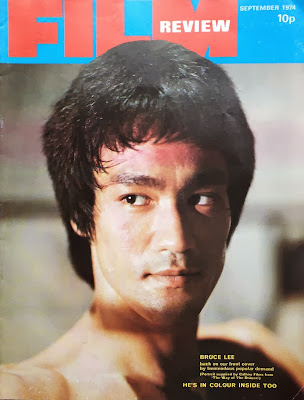 Bruce Lee was still breaking as a star around the world, despite having passed away before all his movies were completed. Whole films were built around any of his unused fight scenes.

Bryan Forbes filming The Stepford Wives with Paula Prentiss and Katherine Ross. At one point, Brian De Palma was going to direct this! A creepy tale of feminist backlash in suburban America.

A double-bill of WTF. The French animated science-fiction Fantastic Planet anticipated the launch of 'Metal Hurlant' magazine, reconfigured as 'Heavy Metal' for the US. Here teamed with a feature-length 'documentary' about surfing, Crystal Voyager - mostly cool shots of world class surfers riding through pipelines from a boards-eye view. A couple of years later, I saw Crystal Voyager as a support film for Tommy on a late night show. Very, very late.

The Legend of Hell House and the last of the Planet of the Apes... from 1973